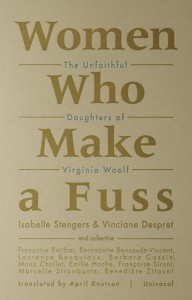 In the novel I Love Dick, Chris Kraus writes, “Who gets to speak and why . . . is the only question.” Over the years, this quote has become somewhat talismanic for women in certain literary spheres, serving, for example, as the subhead to Emily Gould’s blog Emily Magazine. The continuing resonance of Kraus’ assertion lies in the fact that it does not just ask us to crack open all of our discursive spaces to see how they might produce certain thoughts and modes of speech, but it also makes a stand for the importance of such a project. Then, in thinking about who is speaking and why, we start to consider how they speak.

What kinds of speech are privileged and how is this connected to the question of who gets to speak and why? A new little book called Women Who Make a Fuss (WWMAF), written by Belgian philosophers Isabelle Stengers and Vinciane Despret and translated from the French by April Knutson, addresses this same question, but from a more explicitly academic perspective. They ask, “What are women doing to thought?” and connect this question to the position of women in the academy. They ask how the operation of academia in the context of economic forces might determine what kinds of ideas are produced, and how these determinations can be resisted.

They divide their inquiry into two discrete parts. Part one is composed of a series of co-written chapters clearly outlining Stengers’ and Despret’s starting point and overall argument. In part two a number of other female philosophers and scientists (the authorial “Collective”) respond to a letter sent out by Stengers and Despret. In this section, the women of the collective become both interlocutors and case studies — a multi-directional dynamic that fits the particular kind of situated thinking Stengers and Despret are interested in exploring. Like any good book on thought, the form serves in part to demonstrate the content. Their arguments are complex, but in the end their conclusion is simple: don’t be afraid to be fussy. “Women who make a fuss are not heroic figures,” write Stengers and Despret, “rather they are damned nuisances.” And that is not a bad thing.

WWMAF comes from a distinct philosophical perspective, and responds to a particular understanding of the consequences for academia — and human thought more generally — of our present socio-political condition. Stengers and Despret are both “philosophers of science,” which means that one of their primary interests is understanding and questioning the systems through which we establish knowledge. Stengers has written extensively on contemporary philosophers Gilles Deleuze and Gilbert Simondon, both notable for understanding objects, beings, and ideas as in a constant state of machinic flux, always “becoming” as a part of interconnected assemblages. Despret works in the fields of Ethnopsychology and Animal Studies — both of which she herself pioneered and helped to define — asking how the relationship between studier and studied informs conclusions drawn from scientific observation. Both are interested in thinking with the things they study.

It is also important to note that Stengers and Despret have not been particularly engaged in the fields of feminist or queer theory in the past. Their perspective is that of female philosophers attempting to understand how the fact of their gender might differentiate them from other philosophers, writing,  “Neither one of us . . . is able to confirm that what we have done . . . we have done — or dared to do — because we were women. We worked this way because we imagined that philosophy should be done this way as well, because this is what we hoped for it to be.”

On entering their academic careers, Stengers and Despret shared what they term an “amnesiac” entitlement to their place, as women, within the university. However, now they are concerned that the freedom they experienced might not be available to future generations. This change would be due not to any active attempt to exclude women from the university. Rather, the institutional space that allowed Stengers and Despret to do philosophy as they “hoped for it to be,” might be decreasingly available for anyone. How does this affect women in particular (for example, the low percentages of women studying hard sciences)? Are there valences of exclusion in the way these disciplines work and the kinds of questions that are being asked and answered? When they ask, “What are women doing to thought?” Stengers and Despret are also asking where free thinking can take place in the context of contemporary academia, in which “true philosophy” becomes defined “by the problematics admissible to the top-rated journals.”

Stengers and Despret frame this imposition of economics over knowledge as a crisis that must be confronted, and fussiness is their suggested response. WWMAF takes as its point of departure the book-length essay by Virginia Woolf, “Three Guineas,” which they describe as “a work of resistance at the limit of despair.” “Three Guineas,” was written in 1939 as a response to a letter Woolf received, asking her to sign a manifesto to commit to “protect culture and intellectual freedom” in the face of Nazi fascism. Woolf refused to sign the manifesto, as Stengers and Despret explain, and instead proposed, “to her sisters that they not commit themselves to the side of their fathers and brothers.” Woolf then drew a distinction between the way that men and women encounter and produce knowledge, writing, “the daughters of educated men have always done their thinking hand to mouth; not under green lamps at study tables . . . .They have thought while they stirred the pot . . .” Woolf declared, “Think we must,” but framed thinking, for women, as something embedded in life and action.

Stengers and Despret argue that Woolf set herself in opposition to the instrumentalization of “cultural and intellectual freedom” in a conflict of “good versus evil.” Their objection to engaging in such grand battles lies, however, in how they think it’s possible to make progress in a struggle, and not in whether or not there is anything that can be called “good,” or “evil.” They are more concerned with effective responses to crises than with moral relativism.

And so Stengers and Despret do not ask us to sign a manifesto to preserve culture and intellectual freedom, in order to stand our ground against evil forces. They write that we should mobilized towards “a habitable world: a world just a little bit better.” This is the kind of world we can all move towards together: messy and chaotic and in productive conflict, even if progress is shaky and incremental.

Stengers and Despret, in explaining the difference between research conducted by female and male primatologists, frame this feminine thinking-while-stirring-the-pot that Woolf describes as a relationship with the subject of study that lets the subject determine questions: “They tried to learn from [the apes] what the pertinent questions were.” Fussiness then emerges as the very act of considering what it might mean to do feminist science, no matter how unwelcome that idea might be in most hard science departments. Stengers and Despret write, “What is it then that matters the most: fighting for a science attentive to pertinence or confirming the hypothesis that science as she does it is incapable of such attention?” Stengers and Despret always fall on the side of asking the new, uncomfortable questions, of being a nuisance.

As a way of illustrating in stark terms how making a fuss might be effective in a way that lining up solemnly on the side of established good might not, Stengers and Despret share a surprising closing anecdote: Georgette Thomas, with her husband, was condemned to death for throwing her mother-in-law into the hearth fire because they thought she was a witch. Thomas refused to accept her fate with dignity — however justified and inevitable it was. Stengers and Despret write:

She had to be carried to the guillotine by the assistant executioner, completely lacking that courage that, it seems, creates the grandeur of men who climb up the scaffold . . . Following her execution, on January 24, 1887, it is said that Louis Deibler, the chief executioner, asked the President of the Republic to automatically grant clemency to women, these spoilers of his profession. That was the case until Vichy.

And so women were saved from the death penalty because they were unable to comport themselves with graceful honor, instead fighting frantically, hysterically, until the end.

While in many ways counter-intuitive, this feels like a position to embrace. Women Who Make a Fuss is an idiosyncratic little book, written by two idiosyncratic Belgian intellectuals. The fact that it falls more or less outside of any canon of feminist thought, that it comes at its questions from a wonky angle, makes it feel refreshing and novel. But most importantly, it culminates into an understanding of how thought can happen that feels both liberatory and cathartic.

It may be uncomfortable to align oneself with the frantic mother-murderer, and yet it’s worth considering: what is the value of walking soberly and honorably to the guillotine? Why not cry and scream all the way there?