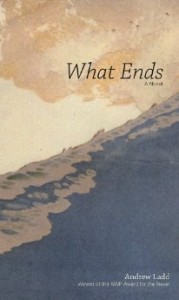 The most sophisticated aspect of Andrew Ladd’s debut novel, What Ends — winner of the 2012 AWP Award for the Novel — is its shifting perspectives and narrative voices. The free indirect discourse moves between the five members of the McCloud family: George and his wife Maureen and their children Barry, Flora, and Trevor. We get glimpses of each character through the eyes of their family members and also by experiencing the narrative from their point of view.

Set on the fictional Scottish island Eilean Fìor — based on various locations around western Scotland, according to the author’s note — the narrative of What Ends is organized into four sections that jump around in time: 1980 moves to 1995, then the story shifts back to 1988 before ending in 2002.

These chronological acrobatics highlight the novel’s central crisis, that the “older way of life had begun to falter, and a skulking sense of the end, impending — however optimistically ignored, however strong their sentimental bonds — was slowly beginning to take hold.” This anxiety for the island’s future drives the story: more and more people have been moving to the larger islands or the mainland, as opportunities have become scarcer on Eilean Fìor. The McClouds, who run the island’s only guesthouse and pub, end up as the last family on the island. Looming over the narrative is the unspoken obligation for at least one of the children to stay on the island and inherit the family business.

Trevor, the youngest, is set up to be some sort of prophetic child; we are told that his birth would have “many repercussions.” Further, “His arrival on the small, declining island was a pebble dropped in a pond; a dying stillness disturbed.” Will Trevor revive the “dying stillness” or will he contribute to its spread? He does become one of the island’s last preservers, finding and collecting things from all over the island and within his parents’ house: an old family photograph, “the fuel cap from the guesthouse’s old diesel generator . . . a gnarled piece of driftwood, a rusted nail lodged in one end the only clue that it had once been part of the bridge to the Stùc.” Trevor’s collecting is like a last-ditched effort to preserve the “older way of life” that is slowly fading away.

The oldest McCloud child, Barry, is introduced as a curious 7-year-old in the novel’s first section. He excitedly goes to study with Mr. Lewis at the old schoolhouse, absorbing everything with a typical wide-eyed inquisitiveness. But things shift markedly in the 1995 section, when Barry gets sent to secondary school on the mainland. He gets bullied and falls in with a bad crowd, becoming sullen and secretive on his trips home until he eventually disappears: the real world is bigger and more dangerous than the island and it has swallowed up the innocent, sheltered boy.

Middle child Flora, initially resistant to education, becomes the family’s success story — or at least would be, if her parents had supported her artistic talent and choice to move to Edinburgh for art school. Luckily she has Bella, also an artist, who recognizes Flora’s talent and lets the girl share her studio in the mansion on the island’s Stùc. Off the island, Flora assimilates well and is the novel’s most positive and hopeful character, proving that it is possible for an islander to succeed and make her own way in the wider world — something that her mother wishes she could have done.

While their children move back and forth from peopled places to the quiet island, George and Maureen remain insular and isolated on Eilean Fìor. We most often see Maureen in the kitchen, compulsively cooking soup and stew to stock and over-stock the guesthouse freezer. She occasionally has fights with her children but seems to be relatively content. George, too, seems to be a decent father — we don’t get much from his perspective until the end — who enjoys running the guesthouse and doing crossword puzzles with his daughter. We are lulled into the couple’s seeming harmony until we read from Maureen’s point of view in 1988 and understand how unhappy and stuck she actually feels on the island. Also through her eyes, we see George as a selfish and controlling husband who essentially prohibits his wife from ever leaving the island except to visit the oft-mentioned “relatives in Perth.”

Upon finishing the novel, I began speculating about its title: What could “what ends,” a sentence fragment, refer to? It could fit into various questions, such as “To ‘what ends’ must we go to keep people on this island?” or “’What ends’ does it take to hold a family together?” I don’t think there is one set interpretation. The ambiguity of “what ends” works together with Ladd’s shifting free indirect discourse, which gives the reader a range of perspectives on the novel’s exploration of changing times, as the younger generations look beyond the island where they grew up. The narrative style also emphasizes each character’s feelings of isolation or of being stranded: physically on the island, emotionally in a controlling marriage, in between familial duty and bigger dreams.

In What Ends, Ladd plays with our expectations as readers as he reveals multifaceted characters through cleverly intertwining perspectives. The novel quietly builds to a sort of anti-climax — the depopulating of the island — and is worth reading if only to get to the last, poignant section from George’s point of view. Ladd’s straightforward prose is not particularly memorable, but there are moments of haunting clarity, as in George’s thoughts near the end:

More than unhappy, really. Something harder to define. A change in the way he talks, and the way he moves, a sort of doleful blandness to his manner. Signs — signs he knows he should understand — of something Trevor won’t say, but wants to. And this is where George really does rue his mental slowing down, because even if he hasn’t always been the perfect father, he feels sure that in the past he would have got it, would have known exactly what to do — whereas now he just watches as Trevor lopes helplessly along, and feels in response some elusive, intangible remorse.

Like George, What Ends as a whole pulls at past and future, as the out-of-sequence sections zoom in on certain years on the island and the events that ultimately lead towards an uncertain future for both the island and its last inhabitants.

Tammela Platt is a Returned Peace Corps Volunteer (Ukraine, 2010–2012) now living in London, where she is completing her MA in “Issues in Modern Culture” (i.e., 20th-century literature) at University College London. Alongside her studies, Tammela teaches and tutors EFL/ESOL students and enjoys cooking, running, and blogging about it all.