The Dark Side of Genius 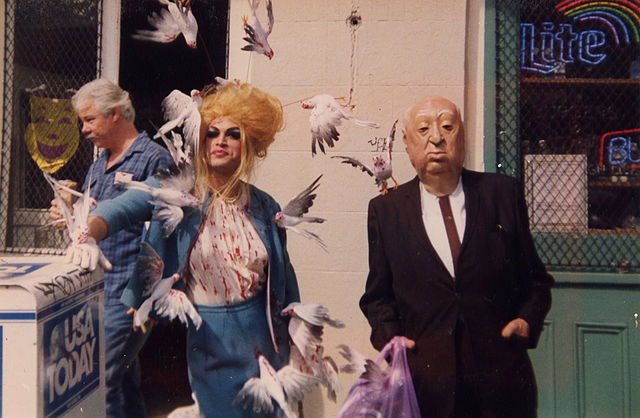 Despite being dead for almost 33 years, Alfred Hitchcock still managed to have a fairly interesting year in 2012. In addition to Vertigo’s toppling of Citizen Kane as the greatest film of all time in Sight & Sound’s decennial critics poll, the Master of Suspense also turned up on-screen as the subject of not one, but two films about his later life. I’ve personally been a fan since seeing To Catch a Thief on television at age 9, but I put off watching both of these movies until recently, mainly because I feared their unsavory portrayals of the acclaimed director might dampen my appreciation for his work. You see, both Sacha Gervasi’s Hitchcock and the HBO/BBC co-production, The Girl, shine light on what author Donald Spoto refers to as “the dark side of genius,” or in plainer language, Hitchcock’s tendencies toward voyeurism, sadism, and misogyny.

Hitchcock, starring Anthony Hopkins, chronicles Hitch’s obsession with making Psycho, at the cost of alienating his wife and everyone else in the film industry. The Girl, darker still, follows Tippi Hedren’s account of how Hitchcock, played this time by Toby Jones, routinely subjected her to mental and physical torture on the set of The Birds and beyond (the shooting of Marnie is also featured in The Girl, though from its promotional campaigns, you would hardly know it).

Since watching both movies, I’ve become fascinated by the idea of Hitchcock being cast as his own controlling boyfriend/husband characters from Vertigo and Marnie, respectively. And the more I think about it, the more I’m convinced that the personas of Scottie Ferguson and Mark Rutland underlie the characterization of Hitchcock in last year’s biopics.

In Hitchcock, actress Vera Miles, played by Jessica Biel, compares the Master of Suspense to Scottie Ferguson: “You know that poor, tortured soul Jimmy Stewart played in Vertigo?” she asks Scarlett Johansson’s Janet Leigh. “Well, that’s Hitch.” Save for a comment about its underperformance at the box office, this is the only explicit mention of Vertigo in the film; however, it’s certainly not the only allusion. Throughout the movie, Hitchcock is depicted as a lovesick voyeur who ogles headshots of the starlets in his famous menagerie of blondes (most notably Grace Kelly). Like the forlorn Scottie, who attempts to transform a lookalike shopgirl into his lost love, he makes up his new leading ladies to suit his fantasies, but does so with a touch of earnest charm that leaves him seeming more like a slightly mad puppy dog than an out-and-out predator.

Even when Hitch is a peeping Tom — he stares at Miles through a carefully crafted hole in the wall — his actions still remind us more of an infatuated Scottie watching the seemingly entranced Madeleine Elster than they do of the more sinister Norman Bates. Like Scottie, Hitchcock’s Hitch also suffers from bizarre nightmares, and throughout it all, he relies on his long-suffering, bespectacled wife Alma Reville — a bright and talented woman who is continually ignored by her preoccupied husband, not unlike Vertigo’s Midge. In the end, Hitchcock aligns its leading man with Vertigo’s Scottie simply by portraying a lovable but slightly deranged man desperate to recapture a spark from his past, regardless of the consequences.

The Girl paints a more savage portrait of Hitchcock. This time there’s nothing endearing about the sleaze; there’s only a man driven by the need for power and control. He harrasses newcomer Tippi Hedren (Sienna Miller) to no end, forcing her to endure such horrors as being pecked at for days by live birds. In the final quarter of the film, a direct comparison is drawn between Hitchcock’s treatment of Hedren and Marnie’s notorious marital rape sequence, in which the titular Marnie, frozen with fear, succumbs to Mark Rutland’s burning lust. Like Mark, Hitchcock is shown to be a wealthy and powerful man with nearly the whole world at his feet; yet he covets the one thing that appears to be out of his reach: the girl. In the same way that Mark pursues Marnie despite her clearly-stated desire to be left alone, Hitchcock stalks Hedren both on and off the set.

Hitchcock once said “actors should be treated like cattle,” and just as Mark views Marnie as an animal he can manipulate and tame, The Girl’s Hitchcock wants nothing more than for Hedren to be his pet. Of course, neither Mark nor Hitch see themselves as villains; both believe their actions are what’s best for their “girls.” Mark thinks it’s his calling to cure Marnie of her neuroses, while Hitchcock believes his only desire is to transform Hedren into a major celebrity.

At the premiere of The Birds, Hitchcock tells Hedren: “So you see, it was worth it; all the fear and the pain and the loneliness. I know I’ve put you through some hard times, but look at you now . . . [you’re a] movie star.” Whether it’s Mark playing doctor or Hitch playing director, the deluded justification for psychological cruelty is ever-present.

There have been several backlashes against the movies (more so The Girl) in which other Hitchcock collaborators have decried what they see as hatchet jobs. Vertigo’s own Kim Novak went on record saying she never saw Hitchcock harass anybody, and she found it sad that he wasn’t around to defend himself from the slander. But while Hitchcock may not have really been a Scottie Ferguson or a Mark Rutland, a pervert or a stalker, by casting him as such, the filmmakers have given us something better than truth. They have given us a Hitchcockian drama.