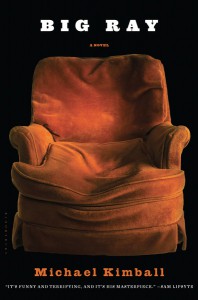 To what degree are we the products of our progenitors — lives inseparably bound, fates and flaws tragically determined? This is among the questions at the heart of Big Ray, Michael Kimball’s subtly arresting fourth novel. In more than five hundred stark, aphoristic entries, unstuck in time, a middle-aged writer named Daniel tells the story of his father’s life, beginning with his death. This is not just Ray’s story, though, nor is it Daniel’s. It is the story of their stories’ inextricability and the consequences of that bond.

Big Ray concerns itself with the leviathan and loud — the title character’s bigness, his temper, the enormity of the shadow he casts on his son’s being — but it accomplishes this quietly. The narration is deadpan and reserved. The verbs are muted, the sentences straightforward. Rather than reach to express the novel’s weighty themes, Kimball’s language bows out of the way. Such minimalism risks leaving the prose understated and flat, but Kimball’s is neither. Colloquial and eerily calm, the style avoids melodrama and imbues the novel with foreboding. “Sometimes,” Daniel says, “I look at the empty space around me and feel like my father is invisible and still surrounding me.” Like the narrator, the novel feels haunted.

Big Ray succeeds most profoundly in its vivid portrayal of a man trying to make sense out of a maelstrom of hate, grief, love, and relief. How is Daniel to feel about the man who raised but also terrorized him, who brought him into the world but was its most potent darkness? How does Ray’s death change this relationship? Kimball does not answer these questions. They are unanswerable, and to act otherwise would be trite. Instead, he compellingly illustrates the confusion so that the reader slips seamlessly into Daniel’s place. In an interview with The Nervous Breakdown, Kimball is clear that the novel is largely autobiographical (the dedication reads “For my dead dad”). He is clear, too, that there are no easy answers for him. “I do not forgive my father for the things he did,” Kimball says, “but I still love my father anyway (and it helps, in a way, that he is dead).”

Given these themes and the fractured structure, Big Ray at times feels so aimless and ungrounded that it seems there is no hope for it as a formal whole. But as the novel nears the end of its page count, it begins to reach toward an actual resolution. In the penultimate chapter, Daniel, having mostly exhausted the sad facts of his father’s life and his pitying appraisal of them, is left with the one story he hasn’t told, which turns out to be the key to everything. “There is something I haven’t been able to say yet,” he writes. “For most of my life, I have been trying to forget about it, and I’ve been afraid to write it down, but I have to include it here or this will not be finished.”

He tells the story he almost doesn’t need to tell, for his unsympathetic accounts of his father’s appetite and lechery have more than prefigured it. Staring the inexplicability of his father’s cruelty in the face, he can be done with his father the living man and handle him as a dead one: unaccountable; all that’s left. The final chapter, though still divided into brief entries, is unified. It’s the longest temporally linear account in the book, and it’s the only one to truly deal with Ray not as a living man and looming shadow, but as Daniel’s now-dead dad. Daniel describes taking Ray’s ashes to Las Vegas for a final round of gambling and overeating before disposing of the remains. “I decided to dump my dad out the window overlooking Las Vegas,” he says. “It was windy outside and some of his ashes flew back into my face.” Daniel lets go of the man but breathes him back in, too, though now dead, dead, dead.