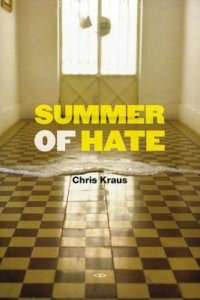 Author and editor Chris Kraus has long been intent on collapsing the barrier between autobiographical reflection and serious political thought. In her first novel I Love Dick, which features a protagonist candidly named Chris Kraus, she asks, “If women have failed to make ‘universal’ art because we’re trapped within the ‘personal,’ why not universalize the ‘personal’ and make it the subject of our art?” I Love Dick was published fifteen years ago, but this question of radical subjectivity continues to guide Kraus’ fiction, criticism, and her decisions as editor of the Semiotext(e) series Native Agents.

This year’s Summer of Hate follows an erudite, middle-aged L.A.-based writer named Catt Dunlop. Like Kraus, Catt is an art critic and occasional professor of cultural studies who sees “no boundary between feeling and thought, sex and philosophy.” The book is infused with Kraus’ self-image and peppered with the likenesses of other non-fictional people, too — Kraus’ ex-husband, the French cultural theorist Sylvère Lotringer, and poet Eileen Myles are christened differently but are nonetheless accounted for.

Emerging rattled from a dangerous relationship with a dominant sex partner she met online, Catt suspects it’s time to leave Los Angeles. She invests in a handful of corroding properties in Albuquerque and moves there to prepare them for rental, seduced by the prospect of tangible transformation. Soon she hires Paul Garcia to work as her property manager. A recovering alcoholic, Paul is on parole after spending two years in prison for “stealing less than an art gallery spends on an after-party.” The first time they speak on the phone, Catt hears in his voice “the rawness and urgency of someone trying to start a new life.” Catt finds Paul intelligent and disarmingly honest, and they begin a romantic relationship.

Eventually Paul is pulled over for speeding and arrested in fulfillment of an outstanding warrant, and the pair embarks on a grueling legal process involving inhumane prison practices and impossible parole stipulations. “How many more obstacles will Paul have to pass,” Catt wonders, exasperated, “before he can live like a regular person?” Back in Los Angeles Catt studies and teaches “all the books about symbolic violence, soft forms of control,” but the forms of control to which Paul is subject are neither soft nor symbolic. Catt feels both grossly unprepared and reanimated, jostled into the present. In any case, the course of her life has fused with the course of Paul’s, and for the time being there’s no turning back.

Albuquerque isn’t a popular setting, but when chosen it’s often meant to signify that the action could be happening anywhere in down-and-out America. Take for example Sunshine Cleaning, in which a pair of struggling sisters starts a crime scene cleanup service, mopping up brains to pay the bills, or Breaking Bad, about a teacher who cooks meth in order to make ends meet after a cancer diagnosis. Here Albuquerque stands not so much for itself as for the anonymous underbelly of the nation, where communities are caught in a mimetic cycle of addiction and debt and incarceration. The city is code for anywhere people leave cars on cinderblocks in their lawns.

Tellingly, many seasons of Cops were also filmed in Albuquerque. Cops is a spectacle of relentless degradation, emblematic of the collusion of the criminal justice system and the American populace’s creepy, punitive voyeurism. Summer of Hate is an indictment of the conditions that give rise to things like Cops, particularly the criminalization of the poor. Interesting that Albuquerque — i.e. the generic American substratum — features so prominently in both the profiteering text and the dissident one.

Kraus makes a bold choice by setting the book in 2004, a period at once too fresh to prompt much critical reflection and too distant to be precisely topical. Indeed, the book risks being quarantined in the ghetto of the recent past. What rescues it from feeling dated is that the systems and processes that intensified during the Bush administration haven’t dissolved since Obama’s election. The U.S. still boasts the highest incarceration rate in the world, military operations continue in the Middle East, detention camps remain crowded on the U.S.-Mexico border, and you can still buy, as Catt observes, “bottles of water that cost more than half the hourly minimum wage.”

Paul’s swerving course takes him and Catt through spaces of helplessness and control inflected with these and other American political realities. Finally enrolled in school despite his criminal record, his unpaid student loans, and the decades-long gap in his education, Paul gets derailed in the infamous Sherriff Joe Arpaio’s Maricopa County, Arizona. As the story proceeds, the series of convoluted and demoralizing disciplinary procedures alternately threatens and strengthens Catt and Paul’s relationship. In vintage Kraus (and feminist) style, there is no possible separation of love and sex from politics and philosophy.

At one point in Summer of Hate, Catt’s poet friend Terry asks with regard to the art world, “Isn’t it weird, how nothing coming out now even mentions what’s going on?” I think one answer is that while many artists are afraid of the widening wealth gap and the darkening clouds of political repression, plenty are even more afraid of artistic irrelevance. Injustice feels so ubiquitous, and the systems that mete it out so indomitable, that often our response ends with a furrowed brow; meanwhile, art that aims to shock us into something more effective than brow-furrowing tends to be self-righteous, one-dimensional and, well, boring. No one wants to be a tired old hippie stomping on an American flag.

But Summer of Hate integrates everything from the appalling treatment of undocumented immigrants to farcical government definitions of torture, and Kraus’ creative edge doesn’t soften for an instant. The book evades the trap by being not just politically frank but also aesthetically canny, emotionally dynamic, and deeply personal. It’s a book about both “what’s going on” on a national level and “what’s going on” in the daily lives of two flawed but redeemable characters, just a couple of people slogging through the mess. It’s a book about sex and love, a book about wealth and poverty, a book about exploitation and addiction, and a book about America — and remarkably it never feels didactic or overdetermined. This achievement marks it as a rare novel. For readers tired of political art’s worn-out strategies, Summer of Hate joins the rest of Kraus’ bibliography in offering an engaging and razor-sharp alternative.