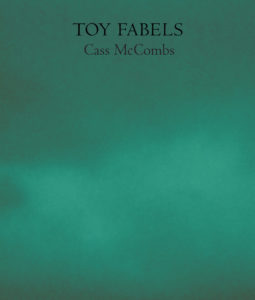 What are the uses of snobbishness? When it’s distinct from elitism, when it’s a principled disdain – could there be a noble snob or even a good snob?

Cass McCombs thinks he’s too good for almost everything but that’s not as bad as it sounds. He loves common life, revels in associating with the underworld of carelessness, drugs, violence, anarchy. His is a moral pretentiousness: he sticks his nose up at comforting lies and abusive authorities: in other words, meaning.

Toy Fabels, his debut collection, alternates between poems, prose poems, and sketches, mixing odes to freedom with jabs at cops and Catholics. Throughout, McCombs’ refrain centers on meaninglessness: “your ‘fate,’ even consciousness itself, is just a gimmick” (“Dialogue of the Shadow and the Echo Belonging to Sade: A Duet”); “however deviant, it’s all a game / no way to justify except that I love to roam” (“We Made Our Mops”); and so on. For someone who finds life so meaningless, McCombs is an oddly earnest writer, which suggests he does have certain loyalties that verge on being meaningful beliefs.

For example, McCombs is serious about hatred: specifically, his hatred of injustice. The below snippet from “Tagging a Church” captures the righteous sneer that drives his jeremiads.

who is the largest owner of real estate of the world?

who takes money from the poor to buy real estate?

who institutionalizes violence toward children?

was I raised catholic?

I was raised nothing

Balancing out his bitterness, McCombs later includes a paean to his heroes, “A Public Mural.” Each figure (from Malcolm X to Gandhi) is an activist fighting for justice.

Martin Luther King  the voice that can carry….

The list goes on for two pages. Admirable as a poem like this is, there’s something impersonal about it; “Mural” is more a series of toasts than anything else. McCombs achieves a true and sustained tone when he writes about freedom, as he does in “A Free Song,” the book’s best poem.

This song is free

I mean it doesn’t cost a thing

And you can’t buy it

Because it’s not for sale

This song is worthless

Got no practical value, no msrp

And it could easily disappear forever

Because it is free

Doesn’t earn anybody a single dollar

And if it was never sung a second time

Free as can be

Free from all money

When there’s nothing to manufacture

Then there’s nothing to defend

And you won’t need to be starting war

Because you’d be free

This song says nothing about anything

Because there’s nothing worthwhile

To sing about when you have nothing to prove

And nobody to fool

Don’t even need to try being free

As easy as turning around

In a world where everything is in motion

He desires a release that’s different than death, which is freedom, uselessness: one’s squander-potential. Equating freedom with nothing, McCombs espouses a dirt-bag vitality: freedom is never freedom to do anything, it is always freedom from some burdensome system (money, war, identity, becoming). Hence his sympathy for misfits and rebels. The way this poem embraces limitation, emphasizing only what freedom isn’t and what it won’t serve, illustrates McCombs’ passionate belief that freedom is an infinite set of limits forever collapsing together to form the smallest possible point.

McCombs is playful, not joyful; trolling, shitposting, ironic past the point of pleasure so that his poetic pranks approach the state of undisguised hostility. His diction lurches from the aggressively pedestrian to a curlicue excess, finding no center. That’s the point. Life for him is a sad game from which you’ll win nothing. His contempt for those who refuse to recognize this truth is nothing less than a pro’s impatience with an amateur. The way to get through life is with a sense of gamesmanship: a healthy remove from all proceedings. Hence his snobbishness: if it seems like McCombs looks down on us, that’s because he’s got some perspective.

This snobbishness doesn’t always land but in the best moments, we see what he means when he says “I gave me a kiss and said a prayer / to protect me” (“The Truck Driver and Malverde”). The contempt is protective and an extension of love for his lonely life.

McCombs emerges in his first book as the child of Charles Bukowski and Wallace Stevens who sometimes wishes Allen Ginsberg were his real dad. In this first outing, McCombs struggles toward spiritual frenzy, struggles toward total casualness, struggles toward artificial grace – yet he successfully inhabits none of these registers. Instead, he’s free.