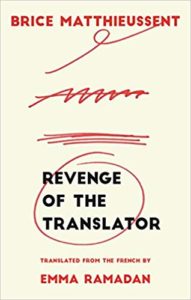 The opening conceit of Vengeance du traducteur (P.O.L., 2009), the only novel yet written by the French translator Brice Matthieussent, is that it is made up entirely of footnotes, written by the French translator of an American, English-language novel entitled Translator’s Revenge. The translator character, eventually referred to as Trad, fills his marginal notes with bitter gripes about the perennial marginalization of the translator. He maligns Translator’s Revenge, too, though its story clearly resonates remarkably with his own life and attitude: it follows an American translator, David Grey, who is struggling to translate a novel by a French writer named Abel Prote, entitled (N.d.T.) (short for note de traducteur, or translator’s note).

If this all sounds confusing, that’s because it is. Abject bewilderment is surely in store, what’s more, for any reader hoping that the book’s confusions don’t extend past — or actively mess with — this basic recursive structure, which, like a set of nesting dolls, at least manages to be organized. Organization be damned, Trad wastes little time in his cramped “lair” at the bottom of the page. Vaulting the thin black bar, he soon intervenes in the main text of Translator’s Revenge. He enters, first as an author-editor and eventually as a character, into the narrative he is supposed to be translating.

Translator’s Revenge, or whatever mutated/expurgated/enhanced/translated version of it Trad offers up, describes a similar interpenetration between itself and the novel within it, Abel Prote’s (N.d.T.). David Grey, Prote’s American translator, grows jealous of Prote’s past relationship with a secretary, Doris, with whom he, David, is now having an affair. He grows indignant, too, that Prote wants him not only to translate (N.d.T.) but somehow to “transpose” it from Paris to New York. He retaliates by installing a virus on Prote’s computer that sabotages the (N.d.T.) file. Prote, in turn, enmeshes David in (N.d.T.)’s text, rigging an elaborate scavenger hunt in his Paris apartment and leaving behind a letter outlining their spiteful pas de deux, a letter he demands David include in the translated edition of the novel. David’s tribulations only multiply when Trad shows up, first in a dream and then in “reality,” insisting that David, Doris, and Prote are themselves fictional characters.

If straightforward realism (or understatement, or minimalism, or modesty, or crystalline aesthetic order) tends to be more your thing, Matthieussent’s demanding and self-indulgent concoction, many-layered and messy like a smashed mille-feuille, might be a bit much. Even readers drawn to experimental fiction and intrigued by the challenge of the strict Oulipian premise — a novel made up entirely of footnotes — might be disappointed to find that Matthieussent is not interested, after all, in pulling off that particular feat.

He is very interested, however, in producing metaphors for translation. Among many other creatures and things, Trad contemplates the translator as: a chameleon; a dumbwaiter; a lazy Susan; a stagehand whispering lines to a struggling actor; a cyclist who rides second in the peloton, supporting the leader; “an indelicate transporter, a clumsy mover, a seedy trafficker”; an airplane pilot reluctantly obeying orders from the control tower; and, in the tiredest cliché of them all, a love-maker. The phrase “translate yourself inside me quickly yes, I’m coming” appears not once but twice.

To  the extent that Matthieussent’s novel also aims to be a commentary on translation, his profuse, almost ecstatic production of conflicting metaphors for it can seem gratuitous, beside his own point. The tensions inherent to translation — between the aspiration to exactness and the acceptance of its impossibility, between absolutism and relativism, erring and merely straying — would be well explored by attention to what specific kinds of meta-phor, what specific kinds of carrying-over of meaning, the translator actually can and can’t execute in good faith. Trad’s notes, written in gleeful, vengeful bad faith, tend not to be about translation, but about ways to get around, or simply ignore, its tremendously restrictive demands. His metaphors and digressions, though entertaining, tend to muddle more than they reveal.

Trad also exudes a toxic mix of machismo and emasculation, and David and Prote are hardly different. Indeed, they come off (perhaps intentionally) as shades or fragments of a single personality, and each of them in turn wantonly objectifies Doris, their professional subordinate. Whatever enigmatic agency Doris wields — she has “a crazy talent for . . . overturning the text’s predictions” — generally the men are the ones seeking and seizing literary and interpersonal authority, and you don’t have to read any Derrida to see that their clashes have as much to do with phallus as with logos. Matthieussent actively courts comparison with Lolita and Pale Fire, but he can’t remotely match Nabokov for style, lyricism, or critical distance from a predatory, pedantic narrator. It seems worthy of note, too, that he has translated hundreds of books by men over the course of his long career, including many by Henry Miller, Charles Bukowski, Jim Harrison, and Bret Easton Ellis, versus only a handful by women. Judith Butler’s The Psychic Life of Power: Theories in Subjection occupies a curious place in his body of translated work.

Matthieussent’s American translator, Ramadan, who is best known for her translations of Anne Garréta’s Sphinx and Not One Day, is a woman. This fact only reaffirms that, especially in the case of this particular, peculiar work-in-translation, the role of the translator must be acknowledged and assessed. Revenge of the Translator, much more consequentially than, say, Gatsby le magnifique, stands a clear, radical step beyond its untranslated analog, revising and expanding the artistic project of the original rather than simply reproducing it for a new audience. Ramadan, like David a French-to-American-English translator, mirrors Matthieussent just as David mirrors Prote; she balances out, and yet also further complicates, the distorted reflections on display in Trad’s funhouse mirror. By the very fact of her translation’s existence, she enters into its dialogue and drama. There may be other translations of Vengeance du traducteur, but only the one in English can truly converse with it, extending its “joli va-et-vient” into a “lovely back and forth.” When David “speaks English” in Revenge of the Translator, he actually speaks English. Trad’s narration, transposed into English, takes on an ersatz, echoing quality that for once, in a translation, comes across as a virtue rather than a failing, a calculated effect of Ramadan’s choice of project and choices of words.

Arshy Azizi, writing in the Los Angeles Review of Books, is right to suggest that, “coming from a woman, [Ramadan’s] translation constitutes a barefaced gesture of subversion.” But Azizi goes too far in stating with certainty which cultural problems, exactly, Ramadan seeks to address via her act of translation, and in asserting that she “seizes the opportunity to insert herself directly into the text.” She does cleverly rearrange Translator’s Revenge into a new title, and, in the final paragraphs, replace a named (fictional) translator of Vengeance du traducteur, a certain Mike Kirkfeld, with herself. But these are fairly obvious moves in the game that Matthieussent has set out, and in general she shows that Trad needn’t have feared what he ultimately fears: “that this Emma Ramadan will be like me.” Diligent and exacting, she matches Matthieussent sentence for sentence, section break for section break. The metaphor of faith is yet another that has passed into cliché, but, in a plain structural sense, her text is faithful to his.

More broadly, we come up against the problem of the invisibility of the translator, the difficulty of ascribing agency and intent. Who’s to say, on the basis of the text alone, exactly what Ramadan has sought or managed to address by means of a translation she has completed essentially faithfully? Not an English-language reader with no access to the French original, and surely this kind of reader ranks high on the list of those the translation — any translation — is for. It is one of the unique triumphs and one of the limitations of Revenge of the Translator that it will be most richly experienced by those who can compare it to its French fraternal, not identical, twin.

Invisibility, unlike vengeance, is a prime, standard goal of the working translator, and, for this reason and others, Ways to Disappear, the recent fiction debut of the translator Idra Novey, is both a stronger novel and a more insightful study of translation than Vengeance du traducteur. Novey evokes and explicates, much more profoundly than Matthieussent does, the actual work, the actual experience of living “suspended . . . in the vapor between languages” — not in the box of the footnote, let alone in the lines above it, but in the spaces of thought and feeling that wordlessly link words to other words, worlds to other worlds. Novey’s author character, a kind of bizarro Clarice Lispector, tells her young American translator, “For translation to be an art, you have to make the uncomfortable but necessary transgressions that an artist makes.” Vengeance du traducteur is full of transgressions that feel completely unnecessary. It’s a credit to Ramadan that Revenge of the Translator, in its entirety, manages to feel like a necessary transgression. You could say that she didn’t do much, didn’t change much, didn’t stray much. But you could also say that it was her most transgressive, subversive move to forego revenge, content instead to disappear.

Alec Joyner is a PhD student in English and Comparative Literature at Columbia University.