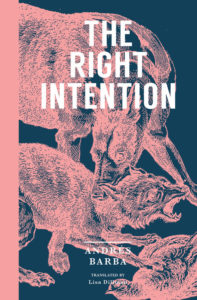 Andrés Barba blew onto the American literary scene last year when Lisa Dillman’s translation of Las manos pequeñas (Such Small Hands) was published last April by Transit Books, a new press dedicated exclusively to translations. A slim book from a foreign author published by a small press could easily have come and gone without much notice, but Such Small Hands became something of a sensation in the translation world, scoring reviews in big publications and the devotion of independent bookstores around the country.

Such Small Hands, originally published in Spanish in 2008, is eerie and all-consuming. The book was inspired by a few lines from Brazilian writer Clarice Lispector’s story “The Smallest Woman in the World” that describe an incident in a Brazilian orphanage in the 1960s in which some girls took the life of a fellow orphan and hid her body for a week, punishing and playing with it. Barba explodes this purportedly true story into a full-blown examination of the inner psyches of orphanage girls, starting with the arrival of seven year-old Marina who is subsequently bullied and adored. The plot of Such Small Hands is fantastically creepy, mysterious, and enticing, but what is perhaps most exciting about the book is not the haunting games of orphanage girls; it’s how convincingly Barba portrays them.

His ability to inhabit the mind and language of his characters is a skill equally present in his second book to be published in the US, The Right Intention. In this collection of stories, Barba crafts four separate worlds using very little description, matched by Lisa Dillman in a hugely satisfying translation. His writing is populated mostly by the inner thoughts of his characters, and from there the reader can imagine and construct all the scenery, the full backdrop to their reading experience. Whereas Such Small Hands was almost otherworldly, each of the stories in The Right Intention feels utterly real. What Barba seems particularly interested in showing his readers is that moment of tension when the character knows they’ve gone too far. They’re already hurtling towards their own demise, or someone else’s. Their mind was most likely made up before the story even started. Marina of Such Small Hands comes up with an idea for a sinister game that results in her own catastrophic end. In each of the stories in The Right Intention, Barba shows us four people on their own road to ruin.

In “Nocturne,” Barba illustrates a love story that never has a chance to succeed because of one man’s crippling self-doubt. The story opens with a the narrator obsessing over whether or not to contact the author of a cryptic personal ad: I’m so alone. Roberto. (91) 4177681. After days of gnawing curiosity and desire, he finally submits and contacts Roberto. What follows seems to be a love story in the process of unfolding, but there are clues that the narrator will wreck everything, whether he plans to or not. Barba is interested in revealing the subtle ways in which people so easily take happiness and distort it into something ugly, the way people allow things that once inspired love to embody vitriol. Roberto’s age, at first enticing, becomes a source of pain as the narrator becomes “aware of the fact that there was a huge part of the twenty-one-year-old boy’s life that he would never be a part of . . . He was young, insultingly young, and always would be.” The narrator, incapable of letting himself go in the relationship, turns his fear of being rejected for his older age into something he despises in his young lover, and morphs his fear into cruelty, treating the boy (as he takes to thinking of him) with utter contempt, forcing an endgame. In under 60 pages, Barba takes us through the full gamut of emotions of someone who finds himself the object of a love that seems too good to be true, and who can’t help but accelerate it into oblivion.

In the middle stories of the collection, Barba tackles the impulse to destroy oneself from the inside out, using physical pain to erase emotional trauma. The characters of these stories drive themselves to physical and mental ruin to escape emotional pain. Barba illustrates how what looks like complete control can easily disintegrate, leaving utter chaos. Reminiscent of Such Small Hands, the tenuous connections between characters are rendered with aching clarity. Barba often traces a clear line, studying his characters’ mental and physical degradation as a result of the very thing to which they have turned as a means of emotional escape.

The final story, “Descent,” zooms in on a woman whose mother is sick in the hospital. We are thrown into the midst of her family drama when old pains resurface as the matriarch inches towards death. Whereas in the first three stories Barba’s characters seem intent from the start to tunnel into their own demises, in “Descent,” Barba presents his character with clear opportunities to choose between allowing her mother some final moments of joy, or enacting secret vengeance. In what is perhaps the least interesting exciting story of the collection, Barba and his translator nevertheless demonstrate a masterful ability to capture the atmosphere of the moment. The characters think thoughts that at first seem cruel, but quickly register as familiar, relatable. For example, as the woman reflects on her relationship with her mother, she compares her family to her husband’s: “When she first met Manuel’s family, she got the feeling that their relationships were completely unreal . . . Discovering later that their affection was genuine turned her against Mamá in a subtle way, because in the same sense that Manuel’s mother had been solely responsible for the love in his family, Mamá must have been to blame for the distance and envy in hers.” This resentment towards her mother culminates in the decision to inflict on her “the ultimate punishment.” Through a mundane story of relatively typical family drama, Barba reveals the surprising levels of cruelty we might be capable of reaching when a lifetime of anger, shame, and sadness morph into something else entirely.

Whether he’s writing about teenage girls in an anorexia treatment center or a man literally running away from his marriage, whether the story is creepy and enthralling or bordering on dull, Barba’s undeniable skill lies in crafting convincing characters that feel like friends, or like enemies, or like people you hope never to meet, whose downfalls feel dangerously possible. Edmund White said that with Such Small Hands, “Barba has returned us to the nightmare of childhood.” Perhaps with The Right Intention, Barba has revealed to us the nightmare of existence.