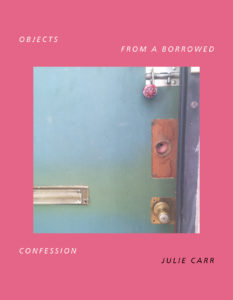 What is a letter unanswered if not a confession? What is a confession if not an attempt to be unrestrainedly seen? What is a name if not a narrative? My heart breaks not for the longing such narratives carry, but for the way all hearts break. The way we obsess and paint our bodies in the cold luster of shame, naming what we don’t understand for some comfort. Language is the salve we rub into our skin. The story we tell of our own unravelling. Violence can’t find the bottom of our inquiry.

Julie Carr is at once a philosopher, a detective, and an archaeologist in her ruminating new work, Objects from a Borrowed Confession. Published by Ahsahta Press this past year, this one-sided epistolary novella explores the fragmentary nature of the human experience in the face of loss. Carr plays with the form of confessional writing, pulling the reader into personal stories of fear and death while maintaining a certain distance, purposefully working against the “I.”

As if to whisper in our ear, Carr writes, “I’m hoping, as I tell of these facts, that you will hear me as a priest hears his confessor — in the dark.” In this investigation of intimacy, empathy, and subjectivity, Carr shows us how we are drawn not only to the act of confessing, but to hearing the confession, or secret, itself. Crossing such thresholds has a cultural impact on one’s identity, and the trickling of the private life into the public sphere is always imminent for Carr in a world of social media and self-exploitation.

In “The War Reporter: On Confession” we get to the heart of the matter, namely, the reasons why we may confess. In Carr’s seamless way of interweaving literature, philosophy, and critical theory into her poetics, she draws from the war reporter Martha Gellhorn’s letters, T.J. Clark’s art writing, and Saint Augustine’s Confessions to analyze, with steady, building precision, the possible motives: “Confessing, does one ask to be forgiven? Or instead, to be recognized, even one could say, made, made something rather than remaining (alone and) nothing? — Confessing do we admit to a failure or a desire?” Confession can act as a vehicle for transmitting one’s fears as much as it reveals the desire to be alive. As much as it hopes to achieve the possibility of truth.

In this attempt at truth or being seen, Carr directs our attention to issues of temporality and violence. The act of confessing requires a recalibration of time in order to render the past and bring the body into the present. In “What do we want to know and how far are we willing to go to get it?”, a series of letters from an ex-lover to an ex-lover’s ex-lover, she connects temporal realities by representing the dissolution of selfhood into that of a stranger. Desire becomes timeless, this suggests, in that we become part of the thread of another’s narrative, even after we leave:

The urge to confess also often lives in close proximity to death. It’s the mystery of death’s impact that stirs a need in us to speak. In the section “Objects from a Borrowed Confession,” Carr explores confession by looking to faces of death. For example, the accidental, merciless death of five-year-old Destin Self. Carr’s re-telling of Self’s memorial in disjointed pieces across large expanses of the page reveals the ways in which grief can disrupt linear narratives. The very name of the deceased boy, coupled with the first appearance of blood in the text remind me of Chekhov’s gun, which is bound to go off, sooner or later. Carr subverts this expectation, however, in that we only learn of the morning after the gunshots, but never witness their fire.

Carr harks back to questions we ask about our mortality as children. The moment we learn we’re going to die is the moment we’ve constructed a precarious notion of self. She asks us: “How could things be thought of as ‘stopping’ at their edges?” This is a sentiment bearing a similar resemblance to the late Akilah Oliver’s burning inquiry surrounding the limits of the body. In this attempt to define the boundaries of self, Carr draws our attention to the fact that the boundaries in question may not exist. The self’s proclivity for envy, which Carr will also deconstruct later in the text, prevents the separation of self and other from occurring. That envy has a doubling effect.

Carr dismantles her readers’ preconceived ideas about confessional writing by rebelling against the form, or rather by creating an ever-changing form. In “Destroyed Works (or Expanded Cinema),” Carr destroys the comma to stretch the sentence, which creates a mesmerizing, musical effect, strikingly different from the rest of the text. This short section in the center shows us that writing itself is a mode of confession, and in Carr’s style, the reprieve is breathless, lulling, and pleasurable in its undulating resonance:

Moods might be transpersonal but then writing might occlude one mood while pretending to offer another just as the sea presents a wave over and atop the one that only seconds before was prominently displayed as its best forward effort and each breath overtakes the last until panting and flushed I forgive myself these compromises for there is no other way.

Perhaps this is “anti-memoir” if one were to name it. As Carr candidly writes: “Immediately upon being asked to write about the self, most women will turn their attention to another. To their mother, perhaps, or lover. Tree bark, whether rough or smooth, loose or tight, like skin to the self has the pretense of only containing, of not really being, the tree.” In “Destroyed Works 2,” Carr seemingly writes the very memoir she alludes to in the tree bark, dispersing the I in fractals: “(Myself, I, I am not seen.)” Its long, cadential sentences and simultaneous brevity creates a disorienting, microscopic world of animated objects and memories. The section that follows, titled “Pity Pride and Shame: A Memoir,” in part derives from Rousseau’s own Confessions, and also slightly resembles Lyn Hejinian’s My Life in its form. If memoir means I have seen, then confessing is the memoir in latency.

Carr returns us back to the epistolary in the last section, “That’s not me: an afterthought.” Only this time, she signs her name. In it we find continued themes of motherhood, shame, and the annihilation of self, for “poetry is always interested in the murder of the self.” Motherhood could be an expansion of the self, or a reminder that the grasp of self is ephemeral. Shame reminds us of our brokenness. This letter, written to Fred Moten, brings up a crucial point, in that shame is a chameleon, and many folks don’t possess the luxury of distancing their bodies from systemic violence:

Just at these moments of division when who you are is so clearly distinct from who someone else is, when your son walks free and her son is shot, there’s a necessary shame in that, in being riveted, just sitting there in a plastic chair with it, your body, what it is or isn’t.

To rivet is to join, to hold, to attract and engross; to direct one’s eyes or attention. Carr presents to us captivating objects under a magnifying glass, only the magnifying glass is a mirror and the object is the dark dense with voices. Her voice from the void, your body an anchor amidst darkness. Listen.

Hannah Kezema is an east coast-born cross-disciplinary artist living in the Santa Cruz redwoods by the sea. She is the author of the chapbook, Three, (Tattered Pages Press, November 2017) available for purchase online (http://www.tatteredpress.org/hannah-kezema).