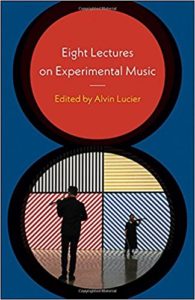 But if we are to have more than this, it will be because our new public for High Culture becomes conscious of itself and begins to show some esprit de corps, insisting on higher standards and setting itself off — joyously, implacably — from most of its fellow citizens, not only from the Masscult depths but also from the agreeable ooze of the Midcult swamp.

Thus, as soon as genre announces itself, one must respect a norm, one must not cross a line of demarcation, one must not risk impurity, anomaly or monstrosity.

—Jacques Derrida, “The Law of Genre”

Between 1989 and 2000, sound artist, composer, and Wesleyan University professor Alvin Lucier invited eight composers whose work he taught in “Music 109, Introduction to Experimental Music” to speak at Wesleyan. In his Introduction, Lucier notes that these speakers have been paid for these talks via a discretionary fund at his disposal as the John Spencer Camp Professor of Music at Wesleyan. He also mentions that each lecture was “recorded and transcribed by a Music Department graduate student, then lightly edited by me . . . then sent to the composer for acceptance, verification, corrections, and additions.” These rather mundane details of the pecuniary and compositional harken to the most striking insights of Eight Lectures on Experimental Music: the fundamental necessity of the university labor hierarchy to foster these creative processes, the inclusive and cloistered networks through which this music lives, and the generational moment these composers and performers anachronously inhabit during the decade in which they give these talks. While by and large, much of the content collected here reads as unremarkable (and at worst irrelevant), brief tangents and stray observations elucidate the contours of a transitory period of American high cultural expression, one wherein the meaning (and sounds) of the genre of experimental music had always already melted into air.

The composers Lucier selected to bring to Wesleyan are his contemporaries, those who had flitted about the same socio-cultural milieus and had by and large found their greatest periods of prominence decades prior to giving these lectures (the youngest speaker, 54, and the oldest, 63). This conjuncture gives a nostalgic structure of feeling to these pieces, almost all looking backwards to the long 1960s and its corollary touchstones. Occasionally, this orientation towards the past finds itself exaggerated ad absurdum. During the Q&A with Steve Reich, the first question comes from a student who asks his “opinions about contemporary electronic dance music.” Reich’s sprawling answer begins with his childhood exposure to Schubert and Beethoven, his first band, his attendance of Coltrane shows, and a consideration of Stravinsky and Weill’s respective injections of popular music into the avant-garde. In the midst of this long response, Reich briefly acknowledges that his eighteen year old cousin has played some techno for him. He has little more to add beyond the claim that samplers and delay pedals represent “our urban folk music” that surely influence the composers of experimental music, without noting any specific artists or styles as influential (similarly installation based sound art composer Maryanne Amacher namechecks Sonic Youth but only to mention their indebtedness to John Cage). Reich misses an opportunity to consider the ways in which his own compositional phasing techniques (tape loops played just out of synch until they devolve into a crowded and frantic soundscape before coming to merge into one another once again) have a repetitive and hallucinatory quality evocative of techno’s hallmark slow burn sonic shifts. The questioner has been able to identify a relational quality that completely alludes Reich who can only reach for reference points from the past, unable or unwilling to hear the present. This answer, however, does evince an operative principle many of these composers seem to hold onto even as they declare its collapse: a distinct sphere of music signified by “experimental.”

In Lucier’s preface, he notes that the use of the term “is problematic” and that “many composers hate the term.” He does outline though what he sees as useful in the category:

John Cage, however, describes it as music in which the outcome is uncertain. Works using chance operations or open forms or that set in motion procedures that are neutral in intent may be good examples of the experimental. Some works even resemble experiments in the scientific sense, in that something is discovered during the course of the performance rather than that a preconceived idea or form is brought into being by the will or skill of the composer.

Experimentalism then, serves here as a means of indexing that which is unique to the compositional and/or performative process, something extant between the purely aleatory and the rigorously planned. This positioning of experimentalism as genre fails to pin down much (if anything) about the sound of this music, the formal characteristics shared by these composers which may indicate a harmonious grouping among them; instead, Lucier’s defense of the experimental harkens to an a priori category, a stable and self-evident exemplification of High Culture, distinct from those “Masscult depths” and “Midcult swamp[s]” so feared by the aesthete critics of the culture industry. Maryanne Amacher, remarking on the homogeneity of a music landscape now avowedly committed to a contamination of genre, suggests a speculative possibility for the future of experimental music:

If art music continues, maybe the only distinction will be that people doing art music might design worlds that somehow are more specialized or exotic or even have watermarks . . . You might make it for one or two people, or one museum, where it would be theirs in this perfect way. It doesn’t have to get played in a million restaurants and bookstores, like poor Bach or Mozart.

In this imagined scenario, the experimental can only continue to exist through a resistance to the public sphere, not via a revanchist countermove but rather through fortifying its retreat. These “watermarks,” little more than a personalized branding, does not avoid commodification as such but rather insists upon a particular mode of commodification, an elite form so removed from the masses as to warrant a personalized key code that only a few possess. One need not wonder for too long as to who these lucky listeners would be, quite obviously those with enough disposable income to pay the artist enough for the composition to be worth their time. This rather dystopian form of availability points towards a revitalization of hierarchy in which High Culture could once again carve out its own exclusive niche, not by virtue of its stylistic idiosyncrasies but rather its utter scarcity in the marketplace.

As minimalist visionary La Monte Young tellingly remarks during his talk, “It’s difficult being a composer who earns his living through his work to ever get caught up on money; it’s a very difficult situation.” Perhaps a materialist account of experimentalism as genre would track precisely how this living was made and its changes over time, the access to funding chains that can sustain a specifically and intentionally unpopular music. Instead, Young’s talk moves between the highly technical (“But the C-sharp could only play alone, or with the D, or with the D and the C, or with the D and the C and the G. The C-sharp could not play alone with the G, it could not play alone with the C, and it could not play with the C and G without the D.”) and the absurd (“For instance, some of you may know that Marian and I live on a very special rotating sleeping-waking cycle. Currently we’re usually awake for about twenty hours and then we sleep for about ten hours. And this goes around, all the time it’s going around.”).

Young does indicate the ways in which this music’s sustainability and proliferation relies upon outside politico-economic structures: “During the recession that we had just in these last few years, you have a good example. There was very little support for the arts because people really needed the money to buy a quart of milk. And when push comes to shove, it’s basic survival. It’s true; you can’t eat a painting.” And while his comment appears directed towards the tightening belts of consumers (or more likely in this case, patrons), the same implications hold true for the composers of this work: the time to make this work must be purchased. If an artist refuses public spheres, the largesse of the private sphere must step in. And while this elite benefaction may help to undergird the lucky artist’s work, it certainly does not offer a hell of a lot of relief to this lost listener who cannot afford their dietary staples (grocery stores tend to pipe in Top 40 and Classic Rock rather than Young’s six and a half hour epic, “The Well-Tuned Piano”).

The most fully realized and ardently composed talk in Eight Lectures on Experimental Music comes from the radical composer Christian Wolff, who at the outset seeks to answer “What is our work?.” Through a discussion of “material survival” that “obviously depends on social networks,” Wolff also acknowledges a tension between “an economy geared to mass consumption on the one hand, and therefore to a homogenizing of our cultural experience, and, on the other hand, an economy that feeds on a privatizing technology.” He usefully frames the experimental as a “sliding notion,” a theoretical marker that strikes me as akin to the “harmonic glissandi” James Tenney discusses in the formal analysis of his own work. Wolff cites Adorno as a guide for imaging this sliding, quoting his maxim that “‘the new [in art] is the longing for the new, not the new itself.’” Wolff’s Marxist account of experimental aesthetics fails to adequately draw out just what that affective possibility of longing may mean for the material reproduction of this genre. He slips into vagueness (“What is experimental? In some ways it is, as said before, a variable notion, differently realized at different times or by different works”) before finely slipping into a tautological definitional gesture (“So what is our work? It is, I believe, experimental music.”). Experimental music then strays just out of our grasp once again, diffusing into an uncertainty of what it means now, even if many of these lectures seem convinced that it surely once meant something. Wolff’s concluding obscurantism signposts precisely what makes this work so confounding and so useful. As the tenability of the experimental became ever harder to discern, one begins to see (and hear) with increasing clarity just how ethereal it was from its inception. Lucier’s famed 1969 piece I am sitting in a room, a deteriorating tape loop of speech that eventually dissolves into the resonant frequencies of the room he performed it in, mirrors this collection itself, less about the content of what has been said and far more about the larger, structural containers of its utterance.