Arts of Living on a Damaged Planet: Ghosts and Monsters of the Anthropocene 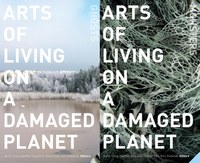 I remember when I wrote you about my interest in writing about climate change for Full Stop, you said there was something courageous about this pursuit, as though I were charging headlong into the eye of a storm. I’m not sure I agree with the attribution of courage (not that I don’t appreciate the sentiment) or of a storm, as I don’t feel particularly gallant or battered in my appraisals. Rather, quite the opposite. On edge and frightened and yet unable to look away, like I’m watching a David Lynch film taking place on a geologic and atmospheric scale.

In reading about climate change, one theme becomes clear to the point of ghostly translucence: the climate crisis’ definitive intellectual, moral, and emotional intractability. It is in fact not even a crisis but a succession of crises, of currents and cascades, each undercutting the last, quietly eroding the relatively stable banks that we have come to expect of our steady and (ahem) “prosperous” geologic epoch, the Holocene. These banks, of course, are the laws of physics and geology, but also the edges of our mimetic expectations and understandings. Reality is principally a set of expectations. And whether we have entered a distinct, measurable “Anthropocene” or not, we are definitely feeling those blundering expectations, the very ground of reality, shifting beneath our feet.

Amitav Ghosh, in his The Great Derangement, says “climate change is often described as a ‘wicked problem,’” a knot of political and moral unwieldiness that belies no solutions. Logos, pathos, ethos — the wickedness of climate change is that it circumvents the scope of all our individuated faculties while overloading all of our communal spheres. It’s hard not to be dire about our prospects. The world of nation-states is hardly a symbiotic community of problem solvers. The individuated world of markets and capital and modernity and subjectivity that got us here has no real plan for getting us back out. Turning around, for that matter, backtracking, is not one of modernity’s defining features. Nor is it one of physics’.

I originally pitched to you a review of this collection of academic, cross-disciplinary essays across the expanded sciences, Arts of Living on a Damaged Planet. It’s a robust collection on the Anthropocene (call it what you will, but the book’s editors are calling it that) that gather scholars, academics, and researchers from fields as various and overlapping as archeology and physics, ethnography, chemistry, microbiology, geology, and conservation. Though its general purview is anthropological, many of the essays expand and undermine anthropocentric models. These are ontological and epistemological accounts challenging the kind of Cartesian dualism and anthropocentric thinking Ghosh points to as giving rise to modernity’s deranged, novelistic view of our world. At the outset I’ll say it’s well worth reading: a frank, luminous set of dispatches from future worlds and fractured pasts.

Edited by ­­­­anthropologists and multi-disciplinary “science art activists,” Anna Tsing, Heather Swanson, Elaine Gan, and Nils Bubandt, the book is arranged as a reversible tête-bêche, with its two different halves meeting in the middle. This form gives it a kaleidoscopic levity and spirit of creative inquisition you don’t often see in academic editions from presses like the University of Minnesota, Arts of Living’s publisher. This isn’t just a formal splash, though, for the editors. They, along with the writers and researchers in the collection, are trying to work beyond the narrow confines of academia toward a more hybrid, relational, and fluid understanding of our world and its connectivities. This world takes many forms at many times; living, as the title suggests, is an art.

The two sections of the book are subtitled Monsters and Ghosts. Introducing the Monsters half, the editors explain the arrangement: “In dialectical fashion, ghosts and monsters unsettle anthropos, the Greek term for ‘human,’ from its presumed center stage in the Anthropocene by highlighting the webs of histories and bodies from which all life, including human life, emerges.” And in the introduction to the Ghost half of the book, they further expound: “While monsters unsettle the conceit of the Individual by pointing to entanglements across and within bodies, ghosts undermine the fable of Progress by guiding us into multiple temporalities that constitute every landscape.” Ultimately a study of entangled pasts and provisional futures, and of unsteady presents, the double-sided monster/ghost coin is a useful one, allowing a wide range of scholars to engage capaciously across scientific and philosophic fields.

A number of the essays stand out for me in the book. To begin with, I find Donna Haraway’s looping inter-disciplinary chapter, “Symbiogenesis, Sympoiesis, and Art Science Activisms For Staying With The Trouble,” a kind of compass orienting the collection’s various trajectories. Have you read Haraway? I first heard of her from Karin, who, as you know, is in grad school for archeology. Although Haraway’s not an anthropologist per se, or not only, she is a key trailblazer in multi-disciplinary approaches to (re)visionary science, impacting fields from feminism to New Materialism to multispecies activism. Most potent, her notion of sym-poiesis — or active, agential symbiotic “patterning” — is downright luminous:

Sym-poiesis is a simple word; it means ‘making-with.’ Nothing makes itself; nothing is really auto-poietic or self-organizing . . .  Sympoiesis is a word proper to complex, dynamic, responsive, situated, historical systems.

Haraway goes beyond previous pioneers in studies of symbiosis, like genomic biologist and scientific feminist Lynn Margulis, to say organisms are not just biotic or symbiotic, but actually quite poietic and even sympoietic — are art as much as they are science. Making, being — Haraway dissolves the distinction between an art practice and a practice of living.

Following Haraway’s chapter are microbiologist Margaret McFall-Ngai’s, “Noticing Microbial Worlds: The Postmodern Synthesis in Biology” and Scott F. Gilbert’s, “Holobiont by Birth: Multilineage Individuals as the Concretion of Cooperative Processes,” which both had me equally exhilarated and perplexed. While McFall-Ngai shows that we are actually far more microbial and cellularly composite than anything resembling a biological “human,” Gilbert follows that by deconstructing many of the most basic arguments for human autonomy and individuality, from anatomy, genetics, and evolution to development, immunity, and physiology. They introduce the concepts of the Postmodern Synthesis—“a new biologic paradigm” in which “organisms are not individuals and Mendelian modes of evolution are moved to the margins”—as well as the holobiont, “an organism plus its persistent communities of symbionts.” Gilbert explains:

The notion of a holobiont is important both within and beyond biology because it shows a radically new way of conceptualizing ‘individuals.’ Recognizing the holobiont as a crucial unit of life highlights process and reciprocal interactions, while challenging notions of genomic purity.

Both of these chapters significantly alter and disrupt anthropocentric conceptions of ontology, crucial work in an era of especially deranged world-making/-destroying. Some of my other favorite chapters in Arts of Living on a Damaged Planet are a queer figural historiography of the symbiotic relations of wolves and humans; a study of salmon domestication in west Norway and its multispecies impacts; a look at collective behavior and communal sensing in desert and rainforest ant colonies; a dispatch about “nuclear spelunkers” and ecological fallout in the Chernobyl zone; a thorough account of recent megafauna extinction, provisional future megafaunas and “trophic rewilding”; and a rumination on nuclear “hauntology” and “spacetimemattering” in radioactive decay and the dispersal of mushroom clouds.

What propels Arts of Living on a Damaged Planet is the question of how we see and understand the world on the one hand, and how we represent and embody it on the other. This is where it relates critically to Amitav Ghosh’s The Great Derangement as it follows up his exposition of our artistic and cultural derangement with a number of intersecting responses, and potential remedies, to that cultural disorder and paralysis. As Deborah M. Gordon puts it in her chapter on ant colonies, “We need to develop new language and sets of metaphors that avoid [the false alternatives of individuation and super-organization] and instead describe collective behavior as a tangle of overlapping connections that is constantly being created, without any locus of control.”

Something that is constantly being created. A tangle of overlapping connectivities. No singular locus of control. This is, deeply, indefinably, a poetics. A kind of poetics that embodies an interstitial relation of sensing. One that elides both our notion of the individual and the collective, and embraces a complicated, nuanced, and profoundly humbled understanding of being and speciation as fluidly embodied consciousness. A ridiculous mouthful, I know, but I’m not sure how else to put it, as I’m not sure modern(ist) English was really developed to speak toward this sort of definitive, non-categorical thing.

I am reminded here, too (and forgive me, cause I could go on and on), of a number of poets and writers who unpack this sort of interstitial multi-conscious webbing in their work. Off the top of my head, I think of the poets Brenda Hillman, Brenda Ijima, Lissa Wolsak and Alison Cobb, among others, as embracing sympoietic approaches. My friend Jamie pointed me to an essay by the poet Jonathon Skinner about Lorine Niedecker and “The Third Landscape.” Neither “pastoral fantasy” nor ordered urban space but “‘acutely compromised situations,” the third landscape is the kind of sympoietic system of entanglements Arts of Living continually investigates: “weedy, cosmopolitan place[s] . . . radically, and rhizomatically, open to the flowers of contingency.” This kind of poetic arts, of sympoiesis, is medicine for living on a damaged planet. Not only is it medicine we desperately need, it’s medicine we (writers, artists, scientists — what’s the difference?) make and need to continue making, to sense a way through the world, a way of surviving.

Sympoietically, from one symbiont to another, xo,

Jacob Kahn is a poet, bookseller and editor at Wolfman Books in Oakland, CA. He’s the author of a poetic guidebook, “A Circuit of Yields,” as well as the chapbook, “Lowest Common Denominator,” and other work online.