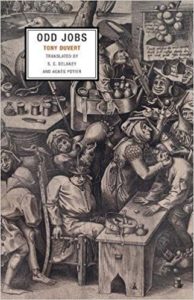 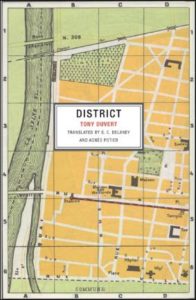 Radical utopian politics is a funny thing. Each iteration is tied to its particular time and place, as much of its moment as the social reality it attempts to overthrow. The upshot of this is that future generations have a tendency to see with clarity the problems and limits of radical thought from the past, and the ways it is part and parcel in creating their own shitty present world (And, yes, I am looking at you, hippies and punks. Thanks a lot, guys.).

But for every utopic vision that gets appropriated by hegemonic social formations, a la the bleed of Sixties and Seventies counterculture into Silicon Valley, and is thus retconned into respectability and legitimacy, there are untold other radical political programs that are swept away by history and forgotten, or that continue to be marginalized.

Tony Duvert is in some ways a figure like this. Best known as the author of Strange Landscape (1973), Duvert explored, in works such as Diary of an Innocent (1976), the social codes of pre-Stonewall gay male desire, particularly as it related to his own preoccupation with and orientation toward pedophilia. In Strange Landscape (1973) and Good Sex Illustrated (1974), Duvert uses these themes to eviscerate the hypocrisies of normative sexual and family values and codes.

On the one hand, these works can and should be seen as the far-left fringe of militant gay liberation politics. However, they also contain explicit depictions of, and sympathetic takes on, pedophilia and child sexuality. But in the Eighties, as the times changed, the radical sex politics and openness to transgressive thought waned. As LGBTQ identities gained mainstream acceptability and became more normative, Duvert became increasingly ostracized by the literary establishment. He ultimately chose alienation over conformity, and died, lonely and frustrated, in the small village of Thoré-la-Rochette, a victim of the changing tides of the radical counterculture that he had helped propagate.

The three aforementioned books, as well as Atlantic Island (1979), have all been translated and released by Semiotext(e) over the last seven years, giving English-speaking audiences the chance to read Duvert at his most garishly and audaciously provocative. Now, with the publication of Odd Jobs (Les petits metiers, Fata Morgana, 1978) and District (District, Fata Morgana, 1978) — both beautifully translated and introduced by S.C. Delaney and Agnes Potier — readers have access to a fuller range of Duvert’s later oeuvre, quieter but no less provocative. These slim (approximately 40 pages each) volumes are put out by the venerable Wakefield Press, whose publication of translations of “overlooked gems and literary oddities” is nothing short of the Lord’s work.

If Duvert is something of a victim of his own sexual desires, and an inability or unwillingness to compromise with normative values, in Odd Jobs and District he leverages this position of a radical outsider to perform scathing and incisive critique of social institutions. Both books are structured almost as a series of encyclopedia or, even, guidebook, entries. The form isn’t too far from that of Roland Barthes’ Mythologies or, more obscurely, the nineteenth century genre of French physiologies. Following after these works, Duvert categorizes the component parts of French institutions, both social (Odd Jobs) and physical/infrastructural (District), although of course the two bleed into one another.

Odd Jobs describes, in twenty-three short chapters, an imaginary French suburban village and the various jobs and tasks necessary to reproduce social life therein. Jobs include “The Snot-Remover,” a man tasked with removing the mucous from school children by sucking it out with a “small reed pipe”; “The Ferryman,” who cheers on those who are drowning in the river, and collects compensation for each drowned body he recovers; “The Snowman,” a child charged with covering himself in snow in order to be violently, physically abused by the other village children; “The Dream Painter,” who paints portraits that “didn’t reproduce the physical model, but made incarnate what one longed to be,” and serve as stand-ins for their actual selves.

While the tone is satirical and the jobs are, of course, over-the-top in their perversity, the portrait presented in Odd Jobs is one of gradual economic intensification. One could do worse than read Duvert — a lifelong libertarian communist associated with Guy Hocquenghem — alongside the autonomist Marxist writings of Silvia Federici, Mariarosa Dalla Costa, Leopoldina Fortunati, and Selma James from this period — writings that first articulated the concept of affective labor. Originally comprising primarily unpaid and invisible domestic labor — such as house-work and cooking — the affective economy has expanded to include such work as customer service jobs, nursing, and even much online advertising and internet traffic-generation. The products of affective labor are often intangible experiences and emotional outcomes. The affective economy works on the body and mood of both the customer and the worker, in the process producing notions of gender, race, and sexuality that are rooted in labor.

Indeed, the labor depicted in Odd Jobs is labor of the body, one which not only makes use of the body and its attendant desires but also shapes and regulates them. Hence, “The Fondler,” a person hired to curb the town children’s masturbation by “lavish[ing] caresses on the child with such devilry that the poor kid, from that point on, would have been hard pressed to obtain such enjoyment alone.” The children, of course, grow to prefer the Fondler’s touch to their own, and seek him out. There’s also the adult version of the fondler (because of course there is), “The Screwer,” a man hired on wedding nights and put “in charge of deflowering the husband while the husband deflowered his wife.” The men of the town, fearful of this wedding night shock, “frantically set to sodomizing each other” to grow accustomed to it beforehand. Inevitably, this develops into a lifelong passion, and the Screwer has consistent business with men of all ages and marital statuses: “this was what made him truly prosperous, for in our village, most weren’t the marrying type.”

In Odd Jobs, Duvert creates a world in which economic necessity and the demands of labor produce desire and sexuality — in other words, a world quite similar to our own. For Duvert, as for the Italian feminist autonomists, capitalist society and sociality comprises a social factory, one in which all facets of life form part of an expanded field of economic reproduction. They show us how the economy produces desires that support it yet, crucially, which it cannot completely control. While the Fondler himself may be doomed to either death or demotion to asswiper, the desire fostered in the children themselves surges beyond control. The Screwer remains both ever-busy and on the cusp of redundancy because the desires produced by his job quickly exceed the intention. Delany and Potier note, in their translator’s introduction, the “strange dystopian/utopian overlay” at work in the society portrayed in the book. Perhaps it’s less of an “overlay” than a dialectic, a negotiation of social forces that masks and mediates an antagonism — namely, that of how sexuality, in particular, and desire and affect, more generally, can be both appropriated by an ever-encroaching capitalist totality, but also how it may exceed its grasp. The rub, as it were, is that this desire, and the person who harbors it, emerges utterly transformed and changed.

District further elaborates the dynamic between stasis and transformation — or, rather, transformation within stasis. Instead of focusing on the social institutions of the small town, this book explores the physical infrastructure of the city and the way in which people inhabit these spaces. Opening with a description of a construction site — the nucleus and cell of the city, the barren beginning of future development — District highlights the shadowy details and underside of urban infrastructure. In many ways, Duvert’s project here is the inverse of Odd Jobs –— rather than deploying an imaginary world to satirize our own, in District he records the urban object world in precise detail, opening it up to reveal the social antagonisms within the solid surfaces. In the staid urban world, Duvert figures the self as merely one object among many, as in “Window”:

You examine the walls, ceiling, furniture, feeling the inanity of it all and knowing that you, in fact, are the same. You’re no longer made of flesh, you are just a heavy, aching mass crushing down on a loose and feeble scaffold of bones.

“Window” ends on a particularly grim note: “Before you leave the room, you glance in the direction of the window…you confirm as you always do that there’s nothing outside, either.” However, the following section suggests that this sense of hopelessness is not all-encompassing. In “Metro,” Duvert’s existentialist defamiliarization takes on more fantastic dimensions:

The male gaze is here articulated not simply as existing within the space of the metro, but as something done because of this space. Infrastructural space creates and produces seedy male sexuality as a form of machinic desire. The division between object and subject, inanimate matter and life, becomes increasingly blurred, as Duvert figures the metro hallway as

long viscera, long belly down which men and women walk subterraneously . . . The corridor ends at the cloaca. A cluster of men spills out of it and disperses, spreading themselves along each sole of stone.

As a New Yorker during the “Summer of Hell” subway season, the imagery of the metro as living beast who shits out passengers is fairly relatable. It’s also illustrative of how Duvert turns the deep, defamiliarizing description of the nouveau roman toward fantasy and even horror. Similar to surrealist dream-imagery or the Situationist detourne, Duvert shows how the vibrantly imaginary, the fantastic, can spring from the quotidian. A later section, “Market,” focuses not on the economic transactions of that space’s daytime function, but rather on the pickers who sort through the garbage after the market closes down for the night. Duvert here shows how detritus and garbage is repurposed, reconstructed, into a new form of life. Utopic might be going too far; but as Dr. Ian Malcolm sagely put it, “Life finds a way.”

And form finds a way, too. Indeed, this concept of the utopic or new buried within the quotidian — the “future in the present,” as CLR James puts it — is not only present in the content of these books, but also in their formal structures and architecture. As noted, they each take the staid structuralist approach of listing and description. But these formal strictures open up, expand, and transform the very things they describe. Ultimately, Odd Jobs and Disctrict are about definition –— both in the sense of giving a meaning to concepts and things, but also establishing the outlines and limits of objects and people. And, in particular, showing how these limits break down and fail. In this way, they have an interesting relationship to Duvert’s transgressive novels. Erotica and pornography always partly deploys the idea of the body as an object — thus, in a genre that depicts perhaps the most intimate, private, or at least taboo moments, the body is utterly defamiliarized, estranged from the sense of self that binds it, normalizes it, regulates it. Odd Jobs and District take these central insights and push them into a wider social field, and a different literary context.

Duvert spent his career writing against such social norms, and spent his life living against them. The new translations of Odd Jobs and District will, hopefully, help to bring Duvert’s writing to the attention of an American audience that could probably use a few ideas about radical utopias right about now.