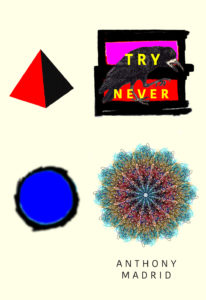 Anthony Madrid’s Try Never is a book of wisdom verse. This is not to say it is a book of epiphanies, those vague realizations earned through the scrupulous piggybanking of sensory details. Madrid’s poems instead revel in the gnomic, the aphoristic. He seems completely uninterested in showing his work, in “earning” it. “I don’t like thinking, I like already knowing,” he declares. Elsewhere he puts it, “I think you’ll agree it’s time we cut corners. We’ll cut / so many corners, the thing becomes a sphere.”

Try Never is a store of polished spheres. All but two of its seventeen poems work in an early medieval Welsh form: three- or four-line stanzas, a couple lines of unadorned nature followed by a gobbet of wisdom. Each stanza of a poem begins with the same phrase (a sort of inverted ghazal — the dominant form of Madrid’s last book). A representative example from the Welsh:

Mountain snow, the stag is in the grove;
very black is the raven, swift the roebuck;
the healthy and free, it is strange that he complains.[1]

To readers of Pope, Hafez, Nietzsche, and the Book of Proverbs, the appeal is obvious. It’s a sort of sagely, sober version of Groucho clowning on Margaret Dumont. The bang-snap of the lines, stark and sudden, becomes addictive when repeated over a dozen stanzas.

These cherry bombs of wisdom work much like famous modern epiphanies — Rilke’s “Du mußt dein Leben ändern,” Wright’s “break / into blossom” — exploding out of contemplative silence, except here they emerge not from an individual’s wandering thoughts, but the landscape itself. They are spoken in the cosmic voice (“A Voice from the Unfathomable,” Madrid calls it), and so the words feel older and wiser than any mortal poet.

In Madrid’s hands, the form keeps its bulletins-from-immortality tone, but the mountaintop proclamations become zanier, drunk on rhythm and crackling with sound effects:

Injured bone. Blynken and Nod.
Visor your irises, handle with tongs.
We all think the Mandate of Heaven belongs
to him who gets-away-with.

Throughout Try Never the role of snow and stag is played by scraps of the vernacular, by Heart and Steely Dan and bits of Eighties nostalgia. And actual nature too, birds and trees, but relocated from Wales to Chicago, with its hellish traffic and humid summers. Most of all, though, is the rhythm.

This is unsurprising from Madrid, one of our sharpest critics of prosody. For him meter is the heart of poetry’s magic. He has a soft spot for magic spells and nonsense (he is perhaps Edward Lear’s greatest living champion) — “The metrical charms would’ve never been written / Down if they didn’t work.” Image and reference often take a backseat to rhythm and rhyme. This approach results in some choice Learish nonsense:

Hole in the floor. Their own stupid fault.
Headed to Lethe and in with a splash.
Trash is my ethnic identity.

Kiṣkindhākāṇḍa. Nice and soft.
Maya from Iowa quoting Rousseau.
I’m ashamed to admit that my shut-up-and-show
Has finally shot up and went.

Pleasantly brash though it is, this could be nothing more than a grad student’s bathroom scrawls, a golden ear attached to a tin brain. Fortunately Madrid has an unerring bullshit detector, and no more so than taking faddish writing to task (“Three quarters of modern memoir is just / Saying things in the wrong tone of voice.”). For all Try Never’s tomfoolery, there is method in’t. Consider “Brake Light Out,” which opens the book with the purest example of its form:

Brake light out. Kid singing along.
In a turn-only lane, you don’t have to signal:
Being in the lane is the signal.

In this way he teaches us the rules before introducing variations (like Bach!). And whaddya know, the poem itself is about rules, the untaught and unspoken ones of Chicago traffic. This is also a pre-emptive apology to the reader. “Brake light out” — that is, this may be hard to follow.

Or look at how “Siebenundvierzig” addresses the pathos and uncertainty of aging from a dozen different angles:

Siebenundvierzig. Riding the waves.
My co-pay is fifty fadom deep.
I wish it were true that the best is best cheap,
But the best is better expensive.

Here Madrid borrows medieval balladry and his own insurance card to make the final stinger instruct as much as delight, which then deepens every other line in return. Thus he sneaks the dread epiphany into post-Ashbery razzle, and both look better for his trouble.

There’s an interview with Ashbery somewhere where he says that “Self Portrait in a Convex Mirror” is meant to feel like falling asleep during a lecture. Try Never often feels like falling asleep at the feet of a guru: some of its wisdom is purest truth and some makes no sense outside the dream, but the pattern of speech is unchanged. Compare the above lines to something like “Like holding your ear to the side of a hill. / If it sounds like the ocean, you know it’s a shell.” If an aphorism like this means anything, it is only to say that we take our cues first from the sound of things.

This is the argument of the book — the cosmic, the Unfathomable Voice gains its authority primarily through rhythm, meter, and form. What it actually says, however true, is an afterthought. It cuts corners, short-circuits rationality. Madrid explains more succinctly: “If you choose to believe it — you don’t.” This may account for the lines Madrid nicks from Shakespeare, Campion, Marvell, Nashe, Swift, Nietzsche, Whitman, Waugh, “Sir Patrick Spens,” Heywood’s Proverbs, and the Bible en Español. These guys understood that rhythmic voodoo, he says, so well that they can be plopped in here, miles away from their context, and still work.

Not that it all works. There is some danger of tedium here, and of gimmickry. It is so with all strong styles. “An Essay on Man” gets annoying as hell after a while. A few stretches of Try Never feel underdone, like a class exercise where every student has to write a stanza with the same first line. “Kiṣkindhākāṇḍa” makes a series of intolerable dad-puns on “didgeridoo” whose grating unfunniness must have amused their author but is not contagious. Of course, Madrid has a ready answer:

. . . This is
the thing they don’t know about magic. It’s
Just not in its nature to work every time;
If it worked every time, it’d be physics.

As far as poetic excuses go, this is as charming as “very well, I contradict myself,” and unlike Uncle Walt, Madrid has brevity on his side, too. The book whips by like a Ramones set, fifty pages with plenty of welcome to spare. And when you finish, those rhymes, those rhythms are there to draw you back to the start.

And the words. Like the lines he quotes from his elders and betters, Madrid’s don’t just shimmer at us without substance. They are graspable, made for use. They lodge in the ear at first reading and cry for memorization, for trotting out to friends (I’ve used “the hollow authority of the hot” a dozen times now, easy). Despite the esoteric references, they are also often ordinary-human-life scale:

Brake light out. Kid turned on by a doll.
Send me two links and I click on neither.

The basketball held underwater
Wants violently to come up.

The lines become ours as much as Madrid’s, the effect not I never thought of that before but yes, it is so. Rejected thoughts, alienated majesty, etc. We’re not thinking, we’re already knowing. This is the same trick Dr. Johnson used to pull. The tone is detached, unhurried, superhumanly confident, yet somehow personal. Not in the ways we typically make poetry personal — there are no confessions here, few strong feelings at all, really. It is personal because it is friendly, and so we trust it. Even when he’s using the Unfathomable Voice, we are invited to have fun with Madrid, not merely sit in awe of him. Those who have ears, let them hear.

[1] Tr. Kenneth Jackson. This, and all the examples I’ve seen, comes from the Red Book of Hergest, which Madrid himself clued me into.