There Should Be at Least One Thing in This World We’d Set Ourselves on Fire For: Sasha Fletcher in Conversation with Rita Bullwinkel 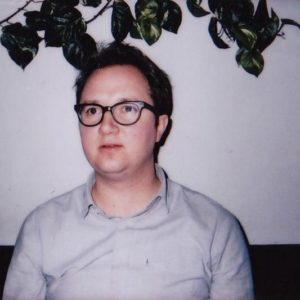 I’d know Sasha Fletcher’s writing anywhere. If Sasha Fletcher wrote a menu, the food options would be described in vivid, winding sentences that ended with the image of the food doing the exact thing that you never thought food could do. Then the food would be lit on fire. It would make dining an ecstatic, all-stakes-in experience. Every restaurant in the world should hire Sasha Fletcher to write their food descriptions. I know that I, for one, would love to feel like it might be the end, or the beginning, of the longest, most mythic war whenever I am putting anything in between my teeth.

A ceramicist turned sculptor of words, Fletcher approaches sentences with the brute force of a line backer. I can see him barreling through his long, connected clauses, pushing through to the victory, which may explode in ecstasy, in the last word, or the last phrase of a line.

Despite these two titles differences in genre, both books possess a core essence of the fragility of the human experience, and a shared symbolic vocabulary of sunsets, fire, American decay and love. Fletcher and I recently wrote to each other over email. Our conversation is below.

What is the most beautiful sunset you’ve ever seen?

I like sunsets for their easily relatable beauty, and also because when you watch them over an ocean, they almost look like they could burn your life to the ground.

What is the biggest thing you’ve ever seen lit on fire?

Once I took the draft of a book I was working on out back and lit it on fire in the grill in the yard and I held up my laptop so the poems could see what would happen to them if they didn’t get better.

What is it like to be Sasha Fletcher and to be in love?

I don’t remember if there’s a scene in Punch Drunk Love where the overhead lights come on above him like a light bulb, but it isn’t unlike that. I don’t know. I keep trying to write poems about it. Honestly, it’s probably a lot to deal with.

Who was the last person with whom you were in love?

The last person I was in love with was an Episcopalian who taught me about Joy Williams, and who is maybe the only person I have ever written a decent poem directly about, to, and for.

Language is just a trash fire we use to try to get a point across.

How do you keep going in the face of human-made atrocity?

As a depressive who feels like they have stuff to do in spite of the disaster they’ve made of their own life, my tendency is to get up, make my bed, make some coffee, and try to find one thing to sincerely give a shit about that day. Spite works too. Look at what LBJ got accomplished.

What is your stance on ecstatic feeling?

I get that there are other ways of feeling, I just don’t think they’re very good.

Who is going to save us?

When I was, I think, 12, my family was up in Vermont for the summer visiting family, and I was riding my bike down a hill, and I hit a patch of loose gravel. My left hand got caught in the spokes of the wheel of the bike and slammed against that forked thing the handlebars sit on, and my right calf got caught in the gearshift and got all ripped up in the skin part, and I got all this gravel stabbed into my chest. And so, being probably 12, I was laying in the ditch that I fell into waiting for my parents to come find me, and after five minutes or however long it takes for a life to happen, I realized nobody could hear me, and limped my ass up out of the ditch, and fell into the shower, where my mom found me an hour later covered in blood and mud. The knuckle of the middle finger of my left hand is funny from the calcified pus to this day.

What should we light on fire?

The moon; Fascists; The idea of Breakfast for Dinner; Our endless fear and loneliness; Everything you can see, because property damage is one of the few concrete ways to damage the state, which will never love you; Your beautiful fucking heart; The sunset and its cheap symbolism; Symbolism, in general; The conviction that our hurt makes us special and is a thing to hold tight at night when you need to remind yourself who you are; And sentiment. We should burn sentiment to the fucking ground, and then have a cookout, because the sun has gone down, and we could all use one more thing to live for, we could all use something in this world that we’d be willing to set ourselves on fire for, like in that Springsteen song, even if it’s problematically melodramatic with its sentiment and symbolism: there should probably be at least one thing in this world we’d set ourselves on fire for. I swear to God.

Rita Bullwinkel is the author of the story collection Belly Up (forthcoming from A Strange Object in May of 2018). Her writing has appeared or is forthcoming in Tin House, VICE, NOON and Guernica. She is a recipient of grants and fellowships from The MacDowell Colony, The Drue Heinz Foundation and The Helene Wurlitzer Foundation. Her story “Passing” was a finalist for The Conium Review’s Innovative Short Fiction Prize judged by Amelia Gray. Her story “In the South the Sand Winds are Our Greatest Enemy” was selected by Joyland Magazine as one of their top five favorite stories published in 2015. Both her fiction and her translation have been nominated for Pushcart Prizes. She lives in San Francisco.