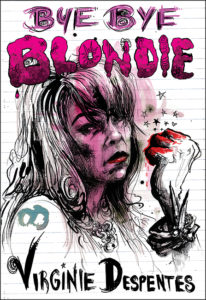 Virginie Despentes’ 2010 feminist polemic, King Kong Theory, was a bit like drinking a bitter, black potion steeped in rage and fury concocted by a kind but brutally frank fairy witchmother. “I am writing as an ugly one for the ugly ones: the old hags, the dykes, the frigid, the unfucked, the unfuckables, the neurotics, the psychos, for all those girls who don’t get a look in the universal market of the consumable chick,” Despentes wrote, delivering a manifesto for women who felt alienated and cast-out from the rhetoric of liberal feminism and its framing of gender equality via the spectacle of consumer and celebrity culture. The female protagonist in Despentes’ most recent novel to be translated into English, Bye Bye Blondie, is also one of the girls who don’t get a look in the universal market of the consumable chick. Gloria is getting older and angrier, and the novel is a narrative of that rage and its specificity rooted in Gloria’s position as a working-class woman in France. Published by The Feminist Press and translated from French by Siân Reynolds, Bye Bye Blondie is a blistering account of a woman’s attempt to exist as a person in a capitalist, spectacle-driven, misogynist society while also trying to honor her love for a man and the deep connection she shares with him. Like Chris Kraus in I Love Dick, in this book Despentes too seems to have set out to solve the problem of heterosexuality.

When we meet Gloria, she’s trying to hold off on totally succumbing to one of her depressive rages, a vortex that she knows will pull her in and send her rattling through the city, taking out her anger on anyone who slightly sets her off. Her most recent boyfriend has just left her, and life once again seems devoid of any hope or pleasure. What she has to look forward to: continuing to debase herself to the state bureaucracy in order to receive her benefits check, and hanging out with the same old group of people in her local bar in Nancy — some of them good friends, no doubt, but all of them in the same situation of being unable to see a future that takes a different shape from what they’ve been used to all their lives. At this precise moment, on a rainy day after she’s just been dumped, Gloria runs into a beautiful man named Eric whom we gradually learn was Gloria’s boyfriend when they were both runaway teenage punks. Eric is now a TV personality while Gloria works a string of minimum-wage jobs.

The first half of the book details Gloria’s teenage life and the blossoming relationship between her and Eric. This reveals one of the key incidents in her life that has contributed to who she is: as a teenager, Gloria was institutionalized by her father because she was too rebellious and unable to be domesticated under patriarchal control. This is where she met Eric — a sensitive, charismatic, lovely young man who hailed from the upper classes — but it was also a turning point in Gloria’s life; she becomes aware of how it is to be utterly powerless in the face of mechanisms in place designed to break the will of a person who doesn’t abide by bourgeois society’s standards. “Here, they dribbled, they raved, they pissed themselves, they cried a lot, they groaned in the night when they weren’t howling. Nothing funny about it, nothing poetic,” says Gloria about the reality of being captive in an institution that circumscribed and controlled the lives of people deemed mentally unstable, without helping them find a way to live within society. After a period of being held without any information, and being forbidden to see her own parents, she’s taken to see a psychiatrist:

At Jeanne d’Arc Hospital, she’d been taken into the office of this handsome elderly man, graying at the temples, aged about sixty. She imagined the Nazis exactly like him: calm, free of doubts, perfectly satisfied with themselves, sitting in elegant surroundings where everything was tasteful, clean, impressive.

The psychiatrist does not approve of Gloria’s punk aesthetics. He tells her that she intentionally makes herself look ugly and asks her why she does this. Even in the midst of being politely humiliated by an older man in power who is meant to help her, Gloria maintains her sense of humor: “On the other hand, she wasn’t setting out to appeal to ancient psychiatrists with white hair. You can’t please everyone, but this man was convinced that if she didn’t look attractive to him, that was her fault.” In King Kong Theory, Despentes writes that around the age of thirty, she stopped drinking and started seeing “analysts, healers, and other wise men.” She writes that they all told her the same thing: “You must reconcile yourself with your femininity.” Despentes said she was compelled to sincerely try to find out more about “this femininity business.” In Gloria, we see a young girl with an iron core of self-respect. In some ways, she is the ideal teenage girl many of us would have liked to have been. She sees through the bullshit and doesn’t reconcile herself with the status quo. In these segments, Gloria appears as wish fulfillment for a feminist who looks back on her life; but it’s very hard to stand upright and keep fighting when disciplinary society is trying to whip you back into shape, especially when you’re young, and especially, like Gloria, when you’re isolated from your family and friends. These are some of the more far-fetched aspects of the book where certain long, narrative sections start to flounder: it feels a like reading a comic book about a superfeminist teenage hero fighting the radical fight against the bourgeois order.

But Despentes gets back on even ground again in much of the second half, which comes to present-day Gloria and her attempt to reestablish a relationship with Eric after a long period of non-communication. When Eric asks her how she’s really doing, all those boring money issues aside, she tells him, “I’m on benefits. That affects all the rest. I’m in debt up to here.” There is no outside of the debt, no existing outside of her material reality, that allows the true and authentic Gloria to emerge. Her lack of wealth shapes her life and Eric doesn’t quite get this. This is the problem between Eric and Gloria: Eric has never wanted for anything, Gloria has nothing, and despite that, they love each other. She goes back to Paris with him and lives in his apartment, and while she participates in his high-profile celebrity life of parties and dinners, she doesn’t compromise on her own worldview shaped by early years in the institution and her subsequent life as a working-class woman. Every dinner party brings about an inner battle for Gloria. Here she refuses to surrender whatever dignity she has by making nice and accepting the social code of conduct set by the rich and profligate. In this article on affective labor titled “Why Are People Being So Nice?”, Martha Rosler writes:

The social pressure to be nice goes far deeper than an imperative for good neighborly      relations. It speaks to a demand, in neoliberal economies, for the wholesale invention,     performance, and perpetual grooming of a transactional “self.” “Really nice” really means “frictionless,” or “low transaction cost.” A basic tenet of neoliberalism was famously expressed as “There is no such thing as society.” This means you are fully responsible for all outcomes, whether in respect to illness, job success, or friendship.

This, too, is Gloria’s central problem: “Everything seems normal to [Eric], the compromises he has to make every day to keep his job, not to have problems with his neighbors, to get on with his friends, and earn plenty of money. Everything he’s prepared to tolerate in the way of stupidity, lies, bootlicking.” Part of the reason why Gloria can’t keep a job long enough to have a career and to make enough money is because she simply refuses to make nice; she refuses to perform the transactional self. Gloria observes that in these gatherings for the rich, most of the men are old and ugly and unpleasant but young, pretty girls circulate like prized commodities. “Everyone in this room is hooked on appearances,” Gloria thinks, “because only the facade is on their side: beauty, wealth, recognition.” She rails against the whole useless charade even as she tentatively puts one foot in when she starts to develop her own screenplay and is courted, professionally, by one of Eric’s industry contacts. Her reasons for this are no different from anyone else’s: she really needs the money.

Things don’t work out in that respect. This is expected; in a book by Virginie Despentes, one doesn’t expect a happy ending to come out of having found a job that gives you money. Her labor is exploited, she’s taken for a ride. In fact no one emerges clean or unscathed in having to sell their labor power under capitalism. But Bye Bye Blondie makes a case for not having to endure all of that shit alone.