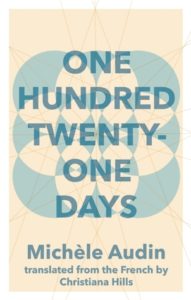 Michèle Audin is a member of Oulipo, a group of French authors and mathematicians who experiment with writing under self-imposed constraints. The most well-known example is Georges Perec’s A Void, written entirely without the letter “e.” One Hundred Twenty-One Days (translated by Christiana Hills) is Audin’s first novel. Knowing Audin’s Oulipo membership, it’s impossible to read this novel without asking what constraints Audin imposes on her work and what effect they have. What does Audin say with and through those constraints that couldn’t be said as well another way?

The main Oulipian “rule” Audin follows is that each chapter is written in a different form. She uses fairy tale-like storytelling, diaries, newspaper clippings, interviews, research notes, letters, descriptions of photographs, psychological reports, and more. All these methods are in the service of following a group of mathematicians in France and Germany as they make their way through World War I and II and the years afterward.

To the extent that there is a protagonist, it is Christian Morstauf (although the spelling of his last name varies, indicative of his shifting characteristics) who grows up in Senegal, is educated in Europe, and then gets wounded in World War I and has to wear a mask to cover facial scars for the rest of his life. Also important is Robert Gorenstein who suffers a traumatic head injury that leaves his mathematical ability intact but leads him to murder three members of his family and live the rest of his life in a psychiatric institution. Robert’s niece Mireille is the reason for the book’s title: she has 121 days of happiness in love with the mathematician André Silberberg before he disappears during World War II.

But there are many other characters — enough that the book’s “Index of Proper Names” comes in handy — who weave in and out of the narrative in its multitude of forms, adding up to a fascinating picture of the various ways academics and their spouses and families survive, or fail to survive, the wars. Some become collaborators during the German occupation of France, some lie low and try to wait out the war, and some end up in German death camps. Behind all of these stories is an unnamed historian who gathers documents, writes notes, and transcribes interviews that then become chapters, and who is an unknown but crucial guiding consciousness.

Audin’s many modes of writing allow her to show how form creates the story, and in many ways is the story. In the first chapter, the narrator tells us “A fairytale is one way to recount history,” and so we get Morstauf’s life told in generalized terms, with a simply-drawn setting, good and evil fairies, and larger-than-life characters. As he grows up and his life becomes more complex, however, a new mode is required: “The story will have to find other forms, other methods.”

The plural “forms” is crucial because the novel argues that one form is not enough to capture the complexity of experience. The good and evil of fairytales can’t communicate the moral ambiguities of Morstauf’s life. So following the fairytale is the diary of Marguerite Janvier, a nurse who treats both Gorenstein and Morstauf and marries the latter, and who offers a highly personalized perspective on events. Then comes a series of newspaper articles, ostensibly objective reports — although containing their own biases of course — of developments in the war and of Gorenstein’s mental collapse. These are followed by a report on Gorenstein’s status by a psychiatric doctor. And so the novel proceeds from one form to another, looking at people and events from different perspectives and angles, peeking into characters’ minds and then gazing at them from afar, creating a sense of depth.

Especially relevant to this novel about mathematicians is the chapter called “The Numbers,” which tells the story in numerical order, starting with negative numbers:

-25, the temperature (in degrees Celsius) in Upper Silesia in January 1945 during the evacuation of Auschwitz

From there, the chapter moves to higher and higher numbers, each with accompanying commentary, written in simple, affectless prose. But this pared-down commentary is gut-wrenching:

6th, Artillery Regiment, the one in which Gorenstein was serving when he had the sense knocked out of him . . .

14, years old, Claude Yerson’s age when he was looking for his uncle’s remains on the battlefield . . .

Having the facts laid out before us in simple terms is moving, but it also creates powerful juxtapositions: we learn that in 1821 the poet Heinrich Heine “evoked the books burned during the Reconquista” and then a few lines later that in 1933 Heine’s own books were “joyously burned in public squares.” The presence of these facts in a straightforward list highlights the ironies and cruelties of history in a manner traditional narration cannot.

One Hundred Twenty-One Days is also preoccupied with the ideologies lying behind the study of mathematics. Heinrich Kürz, a German Nazi, brings the murderous possibility of numbers to life. He praises systemization above all else. He lauds a man for his efficiency in transporting large numbers of Jews and for whom precise and pragmatic numbers alone have significance: “In our century, systematic men like him will be the ones who make history.” His goal is to bring German “rationality” to everything, even the streets of Paris. Morstauf, as a collaborationist and a friend of Kürz, agrees: “What we want is a France where order, work, and hierarchy prevail.”

In contrast to this chilling devotion to numbers as pure and abstract is André Silberberg’s love of a different kind of mathematical language; he values “the irrational, the complex, the transcendental.” For him, numbers can help describe the world, not control and conquer it. Other characters are concerned about how numbers can be put to heartless and cruel uses, as in exercises in multiplication and division that devalue human life:

-The construction of an insane asylum costs 6 million Reichsmarks. How many detached houses at 15,000 Reichsmarks each could have been built for that sum?

The numbers themselves are not terrifying, but as the unnamed historian later remarks, adding the words “mentally ill patient” and “cost” can make calculations murderous.

As important as mathematics is to the novel, though, the making, recording, and recounting of history is an even deeper concern. The process of reading the novel is an experience of seeing the present turned into history, first in the form of historical documents, and then in the historian’s attempts to recover and interpret those documents. What in one chapter is lived and felt experience later becomes archival materials there to be examined — or not — by future scholars: Marguerite Janvier’s conflicted feelings about Gorenstein and Morstauf appear early in the novel in diary form and the engaged reader feels her ambivalence right along with her, but this diary later becomes a scholarly puzzle, a piece of evidence, one of the many stories that form “a sort of chain that holds the threads together — the very fabric of history.”

What is at stake is memory. The historian battles against “the irresistible tide of forgetfulness,” and through great effort keeps primary texts and archival documents alive and available. This novel does little to transform those historical documents into a coherent narrative, however; in fact, the historian admits defeat:

I’ve realized that I probably can’t comprehend the true nature of the relationship between the Catholic nurse and the broken face, the exchange of pain and sacrifice . . .

Audin gives the task of creating meaning, to the extent that it’s possible, to the reader. While reading the novel, we are, in a manner, historians looking at the evidence before us, trying to piece it together to our own satisfaction. To accomplish this requires some effort; this novel is short but demanding.

One Hundred Twenty-One Days is a novel about how we understand the past, and particularly our wartime past, since so often war accounts are subject to political pressures and they change as power structures change. Morstauf the collaborator during World War II becomes the man who receives the Croix de Guerre and the Grand Croix of the Légion d’Honneur and whose 100th birthday receives an official celebration, complete with military parade. Audin wants us to think about how our stories get told and how our history gets constructed. She never lets us forget that her novel is first and foremost an artifact; she has put its pieces together artfully, but its unique form ensures the artifice is on display. Audin’s Oulipian constraints implicitly argue that wartime narratives — and ultimately all narratives — are necessarily partial.