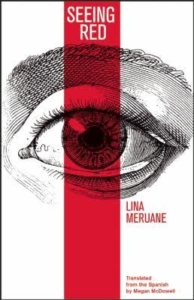 As he was losing his sight during the last stages of AIDS, Derek Jarman produced his final film, Blue: a 72-minute meditation on poetry, art, mortality; on his deteriorating health, encroaching blindness and imminent death. Blue consists of a single shot of saturated color: the blue after-image of the eye specialist’s shattering bright light, an unchanging background that is alternately calming and maddening. “I have to come to terms with sightlessness,” Jarman announces, but the film is more elegy than reckoning: a whole world — a whole reality — has been lost. The body fractures, abandons old forms. Coming to terms with sightlessness means inventing new terms: blindness demands not just a different way of seeing or moving, but an entirely new way of thinking, of being. This is what Jarman is after: “Thinking blind. Becoming blind.”

The effect of blindness on the whole body is at the forefront of Seeing Red, Lina Meruane’s English-language debut. Blending fiction and autobiography, Meruane’s powerfully disquieting novel follows a young Chilean writer and graduate student as she grows increasingly blind. The loss of sight precipitates other losses, too: language becomes unmoored, memory blurs, identity unravels. Just as blindness transforms Jarman’s relationship to film and forces him to reimagine the limits of the form, here too, it overflows, it spills out, it overwhelms. Meruane writes further into, rather than through or around, blindness. Her language pulses with the psychological terror of the body’s betrayal; it pulls at the seams of the self, unleashing something deep within. This is not a fictionalized memoir of transformation and recovery, but a book that burns in your hands, something sharp and terrifying that bites back.

Though Lina, a fictionalized version of the author, has been following her post-Soviet eye doctor’s impossible precautions for years, the worst has always been inevitable, and the veins behind her retinas burst at a late-night party in New York. Blue is the color most associated with melancholy, but red is the color of blood, of rage, and it’s red that Lina sees. Blood fills her eyes: first one, then the other. Only she can see the streaming red, which is at once beautiful and horrifying, terrible and transfixing. Anger mixes with fear, and the threat of permanent blindness sends every synapse firing, triggering in Lina an animal instinct for survival.

After days spent “awaiting her misfortune,” Lina is finally able to get an appointment with her eye doctor, only to learn that she must wait a full month for an operation that will either restore her vision or guarantee its loss. If Meruane begins with horror — the profound shock and discomfort of the blood-red burst — she quickly descends fully into terror, into the tormenting fear that the blindness will be permanent, the anxiety of which threatens, increasingly, to drive Lina mad. Seeing Red focuses less on Lina’s changing physical relationship to the world than it does on what takes place in her mind, the psychological devastation wreaked by uncertainty. If the ability to see the surrounding world guarantees a certain amount of security — mostly, the ability to believe that things really are what they appear to be — the loss of vision transforms the familiar into the frightening, the unknown. The world is no longer as safe as it once seemed, and Lina’s blindness threatens to unravel everything she thinks she knows. It overwhelms. Meruane’s writing, too, builds through accretion, enclosing us in a reality haunted by disembodied voices, unreliable walkways and a faltering memory.

And so blindness attacks not just the eyes, but the mind: it makes Lina unrecognizable to herself. No longer able to read, she spends her time listening to books on tape. No longer able to write, she suspends her graduate research and abandons work on her unfinished novel. Raquel, a friend and poet in Santiago, scolds Lina: you don’t just write with your eyes and hands, she says, and orders Lina to start writing in her head. But writing has always been a manual exercise for Lina, too much rooted in the physical body: “It wasn’t the actual events that drove me,” she says, “but rather the words, and it was my hand that pushed the words, that built them up and then broke them down to forge the phrases again.” Language becomes something that exists mostly in the mind. It loses its physical form. Even as words and their rhythms remain, so much else is lost: landscapes, colors, faces, eyes. This, we can only imagine, is not only devastating but disorienting. As language falls away from its bodily experience, something similar happens to thought, to memory. Lina loses her anchoring, begins to forget herself. Thinking blind, becoming blind: she begins to feel herself disappear, begins to worry that she is being reduced to pure biology.

Trying to stay connected to the external world, Lina listens to the radio and television. But disconnection becomes an inescapable reality of her blindness. She can barely navigate her apartment, let alone the city streets, on her own. Cut off from the life that had, until so recently, been hers, she becomes increasingly isolated and withdrawn, trapped in her own mind, which now, in blindness, is as dark and treacherous as the world she finds herself struggling to hold onto. Angry and frustrated, her moods become increasingly erratic and volatile. She is inconsolable.

At the same time, Lina grows more and more dependent on her boyfriend, Ignacio. He guides her through the busy streets of both New York and Santiago, takes her to the hospital, fills out paperwork, provides as many answers to the secretary’s barrage of questions as he can. The nature of their relationship changes as they become, by necessity, inseparable. His friends mockingly call him her “seeing eye dog,” and Lina herself, recognizing and fearing the burden Ignacio so willingly takes on, begins to call him her “professional slave.”

Illness brings out the labor in love: love is actual work that becomes even more exploitative under the demands of a health care system that relies so heavily on external, mostly uncompensated labor. And even though Ignacio’s care is so freely given, there’s nothing redemptive about his fierce devotion. Love, in its upper limits, transforms into something that begins to look a lot more like terror: it is insidious, it is overbearing. It is too often invoked as people demand the cruel, if not impossible, of each other. The same attachments that were once life-sustaining become suffocating, and dependency, at its maximum, becomes fatal.

Lina’s reaction to Ignacio’s unwavering support is less gratitude than it is greediness. She needs more and more from Ignacio as she attempts to cling to her old life with a desperation that turns nightmarish. Lina’s blindness, after all, changes the workings of not just her body, but of her mind too. Meruane’s novel plunges into the dark recesses of the psyche, the unruly and ugly feelings that take over when the body is threatened with its own betrayal. Lina is, after all, seeing red. When the work of sustaining one life involves the sacrifice of another, Meluane’s novel asks “Would you do anything for love?”

Anna Zalokostas is a reader living on the east coast. You can find her at @azalokos.