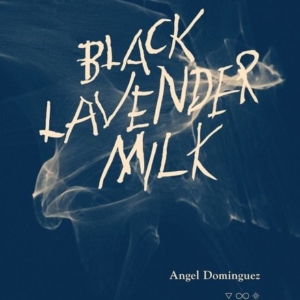 It doesn’t matter. Or: not always clear.

I was introduced to Angel Dominguez as a poet. The label though, as with other hybrid or genre-bending poets like Bhanu Kapil and Ronaldo Wilson (both of whom Black Lavender Milk speaks directly to), is vexing. Dominguez is a poet, sure, but he is also (and perhaps more instructively) a failed novelist. He terms his debut, Black Lavender Milk — a book tumbling between dream requiem and pastoral ritual, a retracing of Dominguez’s Yucatec Mayan family heritage and a fragmented elegy for a grandfather-like figure, Xix — a “failed novel.” Over and over, Dominguez writes of this “novel” he is writing, and not the one we’re reading. Over and over, he references a “book” not present here, of which we glean perhaps glimpses, there and then there, the book he is failing to write from which Black Lavender Milk — like the shadow of a shadow, the shadow of a liquid, say black lavender milk — arises. The book becomes the book’s protagonist. Its metaphor. Its wound.

I write the book before falling apart; I fall with the pages.

This is the book’s apology, its admission:

The novel that was never a novel but an orchard; the manuscript was always just a hole in the ground.

Black Lavender Milk is a book haunted by itself. It charts its own would-be novel writing, attempts it and notates the rupture, the static, the failure, while stretching (and thus collapsing) the mimetic distance between writer and reader, writer and book. The writing, oddly, is aware of the difficulty of being written, often speaking of itself in the third-person, belaboring the “book” or “novel” or “manuscript.” And so too does Dominguez seem mired in the difficulty of the process of what we typically think of as novel writing: narrating, inhabiting, enlivening. Instead, Black Lavender Milk is a novel that purely embodies. It forgets before it remembers, blurred by its own narrative pretensions, sharpened only by the restless body inhabiting its liminal psychic space. Does this make it poetry? Either way, it becomes a story really of that body (and voice — though not always intertwined) trying to articulate its story, restless, invocative, and deeply somatic.

The sentences are creaking with the way they hold water. The weight disbursed between the book and the body holding the book. I build a tension to let go. I forget how we approach writing and start with what’s missing. I get lost and tell no one. I let the book sink until it is another form of emptiness. I’m more interested in its lack.

Black Lavender Milk is a book haunted by its lack. Its lack which is its origin. It is, I guess you could say, an origin story. An origin story but also a story of prodigal, or at least imagined, return. A book wedged, or suspended, as so many “novels” are, between origin and return. “I keep waiting to arrive to a point in my life,” writes Dominguez, “where the air is hot and thick with ancestral-familiarity, where I stare back into a portal or a space of recollection, clear as sky.” That recollection (emphasis on “space of”) oscillates between the “novel’s” main staging grounds: his grandfather’s orchard in the Yucatán and an airport/airplane where Dominguez seems to be neither arriving nor departing, but stationed in wait, perhaps for both, and perpetually.

Oscillating so often between opposites, stationed between them, Black Lavender Milk wedges itself in the pressurized cavities between spatial and perceptual tensions: orchard and airplane, arriving and departing, waking and dreaming, diving and flying, dim and bright, crystals and clouds, speaking and failing to say. The pressure is equally geologic and atmospheric. Parallel forces — aren’t these pressures on some level the same? The writing gains energy, gains urge and élan from this symbolic modulation, this confusion (or implosion) of mode, tense, form, frame. So thoroughly spun out at times, so warped by its own weight and labor of reclamation, return, mourning, loss, the book becomes rapt with a type of vertigo searching for the “novel” it is trying desperately to write. Think about it as motion sickness leading to a type of narrative amnesia. But isn’t that poetry? This dare-I-say lyric vertigo replays itself in Black Lavender Milk’s airplane/airport motif, a dizzying turbulence and pressure the book, “in transit” as it were, can’t seem to shake. One of the sections or chapters, “Vestibule A: Appendix 1,” even finds its justified edges literally squeezed, narrowing from a wide prose block over six pages to a center-justified poem at its conclusion. Here, as elsewhere, the form constricts the contents, the book constricting the “novel.”

The effects of this pressure and blurring, this narrative rerouting, give the book its ambient lyricism, while the scenes in the Yucatán are clearly the narrative fodder for the figmental “novel” behind the book’s shapeshifting curtain. These briefly recollected autobiographical fragments are the somnambular snippets Dominguez refers to as “aisle memories”—moments recalled in transit, glimpsed like amorphous clouds, passed over, passed through. One of these recollected scenes comes when Dominguez describes a Dzonot (“the indigenous spelling of the Spanish word: Cenote”), a series of pits or interconnected sinkholes in the limestone foundations lining the Yucatán peninsula:

Dzonots are portals to Xibalba, the Yucatec Mayan underworld. Here, the bodies from which my blood originates would toss offerings, or offer themselves in hopes of invoking a livable future. Sometimes, a body would emerge from the waters with a message from below.

Early on, in what lingers as the book’s most intuitively narrative passage, Dominguez recalls his “first dzonot,” depicts his “American, hot-blooded and ignorant” self running toward it and jumping haphazardly, though perhaps instinctively, in. “The water was clearer than any memory could possibly reproduce,” this older self notes, and it is this clarity of being, this centered point of ancestral-familiarity that the “novel” spins out from—rhizomatic, to borrow Dominguez’s portrayal of dzonots—and attempts to return to, to recreate. Of course, he preempts this scene in the “novel,” by anticipating and thus forestalling the very artifice he is trying to engage: “I keep imagining this moment in which the book or, rather, the introductory essay on dzonots arrives.” By forestalling that artifice, Dominguez wraps it in a present tense of murky recollection and fragmentary investigation, makes it notes for the novel, a poetic collection of sorts, strained from the clear narrative it is trying to compose.

For Dominguez, to return to, to recreate, “to offer [oneself] in hopes of invoking a livable future,” all seem the same anticipatory, somatic operation. A body emerges with a message. A body is invoked. A body is invocation.

Black Lavender Milk opens with an invocation, to “Pour a glass of water, at night,” and the invocation never really ceases. Again and again, Dominguez composes through forms of invocation: he uses somatic rituals that resemble CA Conrad’s; he produces numbered lists of instructions; he writes (his way) out of dream sequences that propose different outcomes; and he writes through epistolary and elegiac pleas, invoking ancestors, family, former and future selves. It is a book of invocation. Less the “novel,” the invocation of the novel becomes the book.

I don’t want to write a novel anymore.

I built you a dzonot instead: an airplane

More than anything, Black Lavender Milk is a book haunted by its you. Its spirit. Its Xix.

I disclose a syllable you’re not used to saying, though I’ve said it like a prayer all my life: Xix.

A body invoked, invoking, Xix is the figure for whom Dominguez builds his “dzonot,” the book’s guiding spirit, its Virgil, ancestor, and addressee. At its most literal, Xix takes on the role of the speaker’s grandfather. At times we see a “snowy-headed Shaman, tending to his garden,” a poor migrant washing pots in Hollywood, a watchmaker in LA, a figure among poor immigrant dwellings, a man returning to his mother and family. But Xix, without a constituent pronoun, without a way to be broken down, is more than the speaker’s grandfather. Xix is the book’s element, its “colloidal materials to form a constellation,” its underlying helix. Twining and untwining origin and return, invocation and evocation, reclamation and mourning, Xix is the song of all these, the hymn Dominguez recites in the face of the novel’s “failure,” its irresolution and ambivalence.

Despite that lingering irresolution, Black Lavender Milk strikes me as distinctly courageous. It is courageous in its grief, living inside its loss, undeniably lost in it. Perhaps that is its lesson: it is courageous to grieve — or as Dominguez puts it, “to keep returning to a space in hopes of it holding itself when you are not with it: that is an orchard; that is an airport: the ability to designate a state of distance, with a language not of your own language.” The “novel” may fall apart, but Dominguez keeps returning to his wreckage, to the orchard and airport, to grieve, to continually invoke it.

Jacob Kahn is a poet originally from the Rocky Mountains. He currently lives in Oakland and teaches at an elementary school. A poetic guidebook, A Circuit of Yields: Conventional Wisdom for Giants (2015), is recently out from E.M. Wolfman Books in downtown Oakland. Other work can be found in MARY, Spork, and 580 Split, as well as an interview on the SF Weekly The Write Stuff blog.