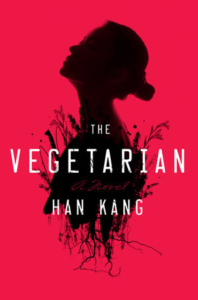 Kafka saw a fish swim at the Berlin Zoo and announced he no longer ate meat, and so the critics have pronounced Han Kang’s The Vegetarian — the tenth of her fifteen books, and the second translated from Korean to English — by turns “Kafkaesque,” “terrifying,” “upsetting,” “hypnotically strange,” “hypnotically serene,” “drenched in hypnotic oddities,” “mouthwateringly poetic,” “bloodcurdlingly beautiful,” “violently erotic,” “phantasmagoric but emotionally true,” and — the cake-taker — “like a room full of large flowers, where the musky odor takes you by the throat.” I had a hard time moving past the praise; it’s not a little ecstatic. I don’t usually go in for flowers or heady odors, but I did begin to recall, while reading the novel’s first movement, the subtle atmospheric smell of Kafka. Reading “The Stoker,” say, is like sitting constricted in a room as the faintly sweet smell of laughing gas floats bluishly in from the vents; it thickens and takes you hilariously by the throat, particularly in Michael Hofmann’s translation. Is this true of Han’s novel? Is The Vegetarian, devastating as it doubtlessly is, funny?

The question feels almost perverse to ask, but only because the novel begins in the brilliant tradition of high, scrambling Kafkaesque comedy and then turns sharply away. The first of the novel’s three narrators wakes up at four in the morning, his throat dry from the past night’s soju, walks into the kitchen and finds his wife standing motionlessly in front of the fridge. “’What are you doing standing there?’” he asks. “’Hello? I asked what you’re doing.’” “’I had a dream,’” his wife responds calmly, and his irritation escalates: “’A dream? What the hell are you talking about? Do you know what time it is?’” His wife, Yeong-hye, exits the room; he falls back to sleep and wakes up late for work, angry at Yeong-hye for not rousing him. He finds her not in bed but once again in front of the fridge, stooped close to the ground, surrounded by packages of meat, the kitchen so littered he has nowhere to step: “Beef for shabu-shabu, belly pork, sliced eel that my mother-in-law had sent us from the countryside ages ago, dried croaker tied with yellow string, unopened packs of frozen dumplings and endless bundles of unidentified stuff dragged from the depths of the fridge. There was a rustling sound; my wife was busy putting the things around her one by one into black rubbish bags.”

In Yeong-hye’s dream she’s in a barn, pushing her way through “blood-red gashes of meat,” still dripping blood. She flees the barn but can’t escape the meat: people are laughing and barbecuing in the woods, her clothes are blood-soaked, and she recalls, distantly, stuffing her mouth in the barn with red meat that may or may not have been her face. She comes to and becomes a vegetarian, or an equivocal sort of vegan: no dairy, but she’ll eat kimchi. Her husband is outraged. Vegetarianism in South Korea, while becoming more faddish (as characters in the novel repeatedly remind themselves), is rare, to the extent that Yeong-hye has no idea how to prepare a nutritious vegetarian meal (she removes the meat from her lettuce wraps so that it’s just lettuce and soybean paste; the beef and clams from her seaweed soup until it’s just seaweed) and subsequently wastes away. She attends a business dinner party with her husband and scandalizes the room, declaring bluntly when presented with meat that she won’t eat it. Her husband invents a medical condition for her and the room settles into casting scorn on voluntary vegetarians.

‘Well, I must say, I’m glad I’ve still never sat down with a proper vegetarian.’ . . . ‘Imagine you were snatching up a wriggling baby octopus with your chopsticks and chomping it to death—and the woman across from you glared like you were some kind of animal. That must be how it feels to sit down and eat with a vegetarian!’

The oppressive comedy follows Yeong-hye to her sister’s house for a family reunion. Her husband, by this time, has made the calls; his wife’s family has expressed their humblest apologies; everyone is upset that Yeong-hye is a vegetarian, and that she’s growing frailer by the day. At the family gathering they try intervening, but Yeong-hye doesn’t budge. Her mother holds oysters in front of her mouth until her arm hurts. Her father insists she eat pork.

Until this point, the novel is peculiar comedy: an inscrutable central figure makes a drastic decision and is assailed on all sides by an immediate and absurd furor, revealing how Yeong-hye’s vegetarianism threatens patriarchal social structures: her husband can’t eat beef in his own home! Her father’s injunction has not been obeyed! (Han has said she doesn’t see the novel as an indictment of “the ‘Korean patriarch,’” but it takes at least a glancing shot, titling anew an old perverse psychoanalytic type: the carnivore superego.) The comedy is in the inventories of meat, the parable-like procession, the inflated indignation at vegetarianism, and the first narrator’s bland, impersonal, pathetic voice, all ego and internalized superego, no id, all reality principle, no pleasure: “Ultimately, I settled for a job where I would be provided with a decent monthly salary in return for diligently carrying out my allotted tasks, at a company whose small size meant they would value my unremarkable skills.” Ultimately, settled, provided, decent, in return for, diligently, allotted, my unremarkable skills: the first 15 pages, in which Yeong-hye’s husband introduces himself and his wife, add up to astoundingly boring comic contractual excess. But the end of the family gathering shows comedy the door. Yeong-hye’s father smears pork across her shut lips, strikes her and shoves in the pork; she spits it out, recoils, grabs the fruit knife and cuts herself.

After page 48 there’s really no more Kafka, or at least no more Kafka content, where comedy and tragic absurdity, orientation and befuddlement, are always fitting into a compacted configuration; instead, what hangs on is something of the slight formality, the clause-balanced politeness, the spare ordinariness of Kafka’s style, which can perhaps be thought of as the wonderful supreme style of no style. “No ‘style’” is how Hofmann characterizes Kafka in the introduction to his translated volume, Metamorphosis and Other Stories, before quoting Philip Rahv on Kafka’s “’ironically conservative tone.’” Ironically conservative isn’t a bad description for Han’s first narrator, Yeong-hye’s husband; the second narrator, Yeong-hye’s brother-in-law, drops the irony and moves into a confused romanticism; and the third, Yeong-hye’s sister, bares language to an unadorned poetry. Yeong-hye, aside from a few italicized dream sequences, never speaks; it’s a shared narrative with a shared object, looked at from different views. The three narratives advance in time and culminate at various extremes; they work together and apart, and in South Korea the three parts were published as serial novellas.

By Yeong-hye’s sister’s narration, Yeong-hye is in the hospital. She escapes into the woods and when she’s brought back she’s renounced humanity, feeling instead an affinity for plant life. In 2000, Han wrote “The Fruit of My Woman,” a story in which a woman turns into a plant and is stuck in a pot and tended to by her husband. Now, at the end of The Vegetarian, Yeong-hye does headstands in the hospital ward, having discovered in the woods that trees stand upside down — she no longer wants to eat, because she’s decided to become a plant.

It’s a story of ironic renunciation, one critics have compared to “Bartleby” and Kafka’s “A Hunger Artist,” along with, to quote Joanna Walsh, a Western tradition of “dwindling and disappearing women . . . from the lives of the saints (try Rudolph M. Bell’s Holy Anorexia) to Margaret Atwood’s The Edible Woman and beyond.” Han’s protagonist dreams herself into a radical pacifism, a rejection of sex and violence that becomes a rejection of life. “It was a body from which all superfluity had been whittled away,” as Deborah Smith translates it, and the scraping away of superfluity seems like the novel’s main aesthetic and imaginative imperative, to the point where it becomes caricatured philosophy, an interminable posing of floating, answer-less questions that keeps on being upstaged by a resurgent reality, both social and existential. In the end, Yeong-hye lies in an ambulance, rounding mountains on the way to Seoul’s main hospital, where once again the doctors will insist on her eating, and, once again, she’ll refuse. The novel’s final move is into a slow, contemplative style of attrition, and it’s a testament to Han’s stylistic range that by the end the impression of Kafkaesque comedy, too, has been whittled away.