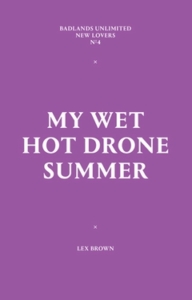 Grinding to dance hall music, and swirling her hips from side to side for hours a day, attracted the attention of the men and more than a few women passing by the gym’s window. She was an expert with her body and used to people watching her use it. That was one of the things Will had always been attracted to in Mia. That, and her radiant brown skin, cute nose, full lips, and deep-set, molasses-dark eyes.

She stretched her hands back and over her head as she pushed her butt into the air, making herself a temptation for the sexy stranger. [. . .] She turned her ass out for him to see, wanting him to.

The premise of the novel is straightforward: Mia, an attorney, and her smokin’ hot stepbrother, Derek, are on a road trip to shadowy Cerón Solutions, headed by the enigmatic Xavier Cerón. Mia, who is working to fight police brutality in her native Miami, needs to acquire blackmail footage that she suspects Cerón holds. Derek is trying to sell the company a super-advanced chip that allows the beholder to see through walls, an entirely unprecedented development in surveillance.

For the last decade, the United States has conducted drone strikes in Pakistan, Afghanistan, Syria, Yemen, and Somalia. Though the U.S. drone strike program is intended to target and kill only identified militants, nearly 90 percent of people killed in drone strikes are civilians. There has been a large, public outcry against drone strikes since their inception during Bush’s presidency. Yet in recent years, and despite President Obama’s ramping up of drone strikes in the Middle East, drones — generally defined as unmanned aerial vehicles — have lost their negative connotation. With the development and popularity of smaller, friendlier UAVs, used for aerial photography, rapid deliveries, or other quotidian purposes, drones now have a reputation in public consciousness that belies their ongoing, fatal government use.

Visibility, voyeurism, and surveillance fill the pages of Drone Summer. The characters, in fucking, conjure imaginary scenarios: in an early sex scene Mia imagines she’s being watched, and places her body in both line of sight and as viewer. Later, discussing the encounter:

He leaned in closer, “I can tell you’re getting turned on right now. There’s no one out here. You want to touch yourself while I watch?”

This motif of an image, moderated through layers and through the web of drone technology that gives rise to such non-stop surveillance, culminates in the demonstration of Derek’s chip, the LRX. While Mia runs, jiggling, through the Cerón Solutions headquarters looking for the blackmail footage, Derek, Wes, and Cerón follow her progress on an AR4 drone, aided by the LRX chip, which can see through walls, barriers, and even clothes:

Her full breasts rose and fell with her heavy breathing. Her ass curved deliciously out as she pressed against a frosted glass door. The three men were silent, each getting harder watching Mia slamming her body against the jammed door, trying to heave it open. Her dark nipples were barely visible as a pixelated image on the screen. She turned around to try another door and Derek could make out the neatly cropped hair covering her pussy. If the camera focused in any closer, they’d be able to see her actual sex organs.

Stripped down by the drone camera, Mia becomes a purely visual object, arousing the three men who see her without touching her. It’s reminiscent, uncomfortably, of the way media makes a spectacle of the black woman’s body. But this, like many other instances of redoubling in the book, is also Mia’s moment of triumph — in using herself as a bait, she’s also able to discover the location of the blackmail footage.

Sight, and recording of sight, are the twin threads that link the wet hot erotics of Drone Summer to its explicit political message. It is the seeing of a thing that brings Mia to Cerón Solutions; it too is the seeing of a thing that allows her to take down Xavier Cerón and leave him gloriously zip-tied and ball-busted in his own headquarters, in a pulpy scene that’s a mix between auteur film and torture porn. Yet just as endless clips of police brutality or violence viewed through bodycams begins to feel useless as the evidence piles up without due change; just as Mia’s efforts for justice only succeed in her translation of sight to action, Drone Summer declares: we have seen enough. Now bear witness.