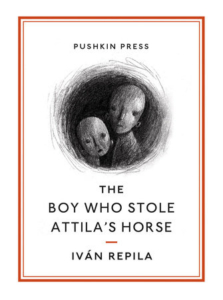 The Boy Who Stole Attila’s Horse, Iván Repila’s second novel and his first to appear in English, is short, sharp and blackly humorous. The premise is simple: two brothers are stuck down a well. One is Big, the other is Small. They are trapped seven meters below the earth, somewhere in the middle of a forest. We aren’t told how they got there, whether they fell or they were pushed, only that this is now the reality they face. They have a bag of food, some fruit and cheese they were bringing home to their mother, but they don’t eat it. Instead, they eat bugs, maggots, whatever roots they can find in the dirt at the bottom of the well. They drink dirty water, and “everything tastes like dirt.” Wolves appear around the edge of the well at night, sniffing for blood.

The book progresses linearly, each short chapter occurring a little further into their ordeal, each chapter title a prime number which corresponds to the number of days the brothers have spent in the well. Days are filled with activity; Big exercises, honing particular muscles, keeping his strength up, while Small searches for food until he is too weak to do so. The nights are quieter but darker too, home to fever dreams and insomniac visions, suicide attempts and self-internment. The brothers’ most intimate moments often come at night, flashes of a sincere fraternal bond, but they usually appear as the result of a particular ordeal, the drained, emotional climax to an acute suffering.

And what suffering there is. Repila appears to take a viciously sweet pleasure in the slow, painful degradation of the brothers’ bodies, and Sophie Hughes’ translation renders it with a brutal force. Their second attempt at escape is a suitably disastrous example. It is their second day in the well, and they know that simply standing on each other’s shoulders is not going to get them out. Big decides to throw Small out of the well, grasping him by the arms and spinning round and round as he works up speed. Every rotation is elaborated upon during a single, page-long sentence and the anticipation grows. Small already knows what’s coming. Upon release, he “smashes, literally smashes” headfirst into the hard, clay wall of the well with “a dull crunch”. He leaves the impression of his body in the wall, and a few teeth, before landing on the dizzy body of his brother, “like a circus act that ends in a bundle of piled up flesh, and no applause.”

The impact of this final simile is cataclysmic; it concludes the sprawling sentence with all the graceful, witty panache denied its protagonists. Reading it, you become aware of the rhythms that have preceded it, and it is the first example of the delicate balancing act Repila performs throughout the book. The physical torture the brothers endure, with Small suffering in particular, has to be meted out carefully. Too much and the story becomes tediously gruesome, too little and the characters become disembodied, floating through their imprisonment. We have to be reminded of their physical toil, but there must also be a bit of humor along with it, a spot of tenderness amid the violence. They might be pissing blood and succumbing to all sorts of afflictions of the skin, but they’re also playing “osteo-vegetable music” on their bones for laughs. The push-and-pull is essential. “Small goes on dying for days, and his brother goes on keeping him alive. As if they were playing.” This is Repila’s game, and he’s good at it.

For all the brothers’ bodily torment, their mental well-being faces even greater challenges. As the days pass in the well, both become prone to flights of fancy, trances, visions. Some are mere escape fantasies, while others descend into spirals of violence and rage. The most heart-breaking are those during which the dreamer appears to have lost all touch with the reality of the well, when their unstoppable imaginations have taken them beyond their own experience into bottomless pits of nightmarish insanity. While Small is unconscious with fever, Big imagines all the things he might tell him if he were awake, devising lessons about the world, elucidating everything from maths and physics to botany and cooking, telling tales of their grandparents, moons, lakes; “of houses with eyes where the windows should be, and which weep tears of wine when their owners leave.” The sweetness of the intent runs unstoppably into the unhinged digressions of a trapped and lonely mind.

Again, Small is the more tortured of the two. As Big admits, Small is the more “self-absorbed” of the pair, and he envies him “all the shades of grey his world seemed to contain.” These shades of grey, this ability to think in abstractions, is ultimately the greatest source of pain for Small. When he loses his mind, he really loses it. He imagines turning the well into a “blood mill” to better grind the bones of his brother, a team of oxen turning his brother into a sacrifice to be offered to the gods in hope of rain. One of his delusions gives the book its title; he steals the titular horse to make shoes from its hooves. His feet and the hooves seem to become almost one, a black hide that “smelled like the shell of a dragon’s egg, or like the skull of an idol.” Whenever he walks over the same ground twice, it turns black. If he walks on a person, they die; “Their bodies turned brown and red. It looked like a poor man’s rainbow: lustreless, born out of a candle and a puddle of urine.” He feels important, he says, “like a painter.”

This is not Small’s only reference to art and creativity, though it is perhaps the most damning. Deep in a fever, he says he will in future carry pens and paper around with him at all times, because they are “tools that will allow him to attest for all time the miracles of his enlightenment. To translate the unpronounceable.” He plays music, he acts in farcical plays and curates mini exhibitions at “The Well Space,” an imagined arts center at the bottom of the well. In one of his worst moments, which is also one of his funniest, Small loses language itself. He begins to speak in gibberish, and becomes angry as Big laughs in his face, uncomprehending. “Raturl! Filiff doan gon huturl! Gon huturl dop unterme!” he shouts. “FOTON DUCRUZZER!”

This breakdown, and the slow, pathetic rebuilding of his lexicon, is perhaps the pivotal point in Small’s transition from a base stability sometimes rocked by feverish patches of insanity, to an altogether deeper, more lasting madness. After this, there is almost a calm about him, a stillness laced with dread. His madness now is cool, sharp. He has a clear-minded conversation with himself about escape from the well, a prophetic splitting of some internal atom. He sees with the clarity of the blessed, he is a man on a divine mission; to leave his mark on the world, to be remembered, to take the unbearable loss of his childhood and turn it into a revolutionary truth, an all-conquering justice. He wants to regain the earth, to have his say. Muttering to himself in the dark of the well, Repila gives it to him, igniting his prose with an almost religious fervor, a demonic possession.

It is no great leap to see Small’s story as that of an artist in an uncaring world, stymied by the dark and unforgiving walls of capitalism, kept in a cage and forgotten. But the story succeeds because, while possibly allegorical, it is neither parable nor fable. All the book’s shadows never collapse into an easily circumscribed moral imperative; never does a clear target make itself known. It is more about the sensation of oppression, of deprivation, than the ostensible causes of those sensations. Capitalism, climate change, war, the plight of the artist in modernity —- the book could be about any or all of them, but it thankfully never feels like it when you’re reading.

The story’s final confrontation shows Mother’s bag of fruit still intact, though rotted beyond recognizability. Small wields it as a weapon, as a sign of how the brothers “overcame every urge.” This is the method of their triumph — to repress desire, to stay disciplined, to never surrender — but it is also its cost. Big’s strenuous exercise regime has warped his muscles and disfigured his body. Small’s mental state is irreparably damaged; he is barely more than a gibbering wreck, a survivor of multiple suicide attempts. Their young lives are essentially lost to the challenge of survival, their minds and bodies rotted by the toll of their repression.

They never succumb to desire, but the effort breaks them. They become mercurial, inhumane. They become almost saints, more idols than living creatures, and here you sense Repila’s attraction to such a figure, as well as the danger he surely knows is latent in them. Just because a messiah might be the galvanizing, inspirational force necessary to overcome the roots of oppression — capitalism, war, art — it doesn’t mean one shouldn’t fear the destruction that will inevitably come in their wake. They are a certain type of madness, beautiful and terrifying. Such a figure inspires both desire and repulsion, hunger and disgust; words that might well describe the feeling of reading this book.

In the story’s final moments, when Small stalks the land like the painter he imagined and a faceless mob rises around him — frightened, sickened, fascinated by the eyes in which “it is still possible to see the well” — Repila moves again into that mad, semi-religious tone, that language of icons and saints, of fire and brimstone, and in the darkness shows us the sparks of an era to come, the first flames and the long shadows of an awesome and terrible insurrection, a revolutionary plague; inspired by madness, and so madness become.

Ian Maleney is a writer from Ireland. He writes about art, music and books for the Irish Times, The Wire and Gorse, amongst others. He’s on Twitter: @ianmaleney