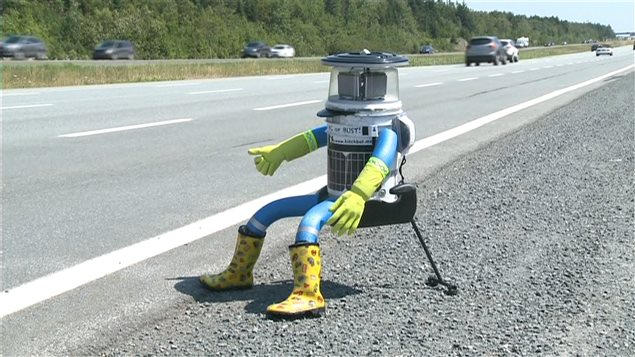 With two flexible “arms” and two flexible “legs” attached to the cylindrical torso, a neon-red smile with a blinking heart on the side of its otherwise transparent dome-head, there wasn’t a lot to Hitchbot. It would not be totally inaccurate to say Hitchbot was little more than an embodied GPS. But to the researchers at McMaster and Ryerson, and to the millions around the world who followed or aided the bot’s journeys across Canada and Europe and most recently the Northeast, the social experiment meant something.

On Sunday, the world learned of Hitchbot’s tragic demise. The Bot, which had traveled across North America and Europe previously, and recently had made it to the City of Brotherly Love from Boston (through New York), had been brutalized in Philadelphia. As the world mourned and sought meaning in the loss of this social robotics experiment, Philadelphia reacted differently, with a cavalcade of glib defenses and gallows humor, further trivializing Philadelphia’s acceptance of casual violence and further frays our tattered urban commons. Hitchbot didn’t say much, but what happened to him in Philadelphia spoke volumes.

Clearly, as the outpouring of international grief suggests: Hitchbot belonged to the world, which is another way of saying he belonged to no one person. His value was in no way connected to his electronic viscera or physicality but rather an idea and belief in the fundamental goodness of people everywhere. Internationally, it calls to mind the memory of the very tragic Pippa Bacca and the disturbing end to her social experiment, which like Hitchbot also aimed to promote peace and promote trust in other people. Domestically, Hitchbot’s demise calls to mind something else entirely, our stained history and heritage. Elfreth’s Alley, where Hitchbot was planted the night of his ‘death,’ is the oldest street in a colonial city which helped nurture American democracy, and also a tourist-friendly reminder that something is rotten and wrong with the American experiment. It is altogether fitting that Hitchbot’s journey ended where “privatism” was born, that quiet Quaker inwardness that gives rise to individual ascent through acquisition, rather than on collective well-being, rather than the concept of a ‘commonwealth’. As Hitchbot’s optical sensors beheld the gimmicky redbrick seatwall of America’s colonial Epcot, he probably lamented that the colonists committed to that historical course.

The media’s dismissal of Hitchbot’s purpose as a “social experiment” fails to recognize the underlying principle that has allowed the bot to travel across two continents. For those who care to delve deeper, the bot’s strategy is essentially a cooperative game where players (i.e. drivers) agree to support a mutually-agreed upon outcome (getting to the next stop) in exchange for an equitably distributed compensation. Here’s where the miracle of the game emerges: the compensation that Canadians, Germans or non-psychopathic Northeasterners gain is simply a sense of well-being, for having cared and shared, and perhaps offered a seat – for the possibility of being a part of something bigger and better. These satisfied drivers make up what mathematician and logician John von Neumann called “the grand coalition” whose basic care for Hitchbot constitutes the stable set of shared behaviors in society. Of course, a person may choose to upend this stable set by exiting the coalition and by privileging their own private profit over the good of the collective. One doesn’t have to be a logician to see that this behavior augurs poorly for other realms of the shared commons – the public spaces – we all once gave a shit about.

In the wake of Hitchbot’s unfortunate demise (or disappearance, more on this later), Kickstarter campaigns have emerged to rebuild the backpacking bot to the derision of those who cast the pummeling as a sort of acceptable form of blowing off steam – “Better a robot than a real person.” But imagine for a second it’s all one cloth: that all violence, all desecration against the commons begins with a perception of weakness in the other. In this case the robot and his keepers were other; Hitchbot was a symbolic representation of trustful collaboration – the bedrock of the open commons. He represented a mute blinking critique of the violent, narcissistic, hedonistic, and consumerist culture that leads to this kind of event (the same ‘Culture of waste, consumption and consumerism’ Pope Francis derides) and how this connects to the ‘Problem of the Commons’ in urban America). Philadelphia detective Joseph Murray quickly proclaimed this an open and shut case of Old City revelry. In the great hierarchy of Philly violence, attacking some geeky boom box with legs is fun and a wonderful way to show this city’s grit. “Nothing here that seems like the death of Jason Sweeney, a young, innocent Fishtowner lured to a lonely lot to be beaten to death by ‘friends’ bent on getting his paltry paycheck,” they all collectively say while lecturing us about the sanctity of human life over the inanimate. Yet this is precisely how the death of urban America has occurred through the thousand cuts of apathy: we rationalize violence and destruction according to categories of social acceptability, leaping to condemn some while writing others off as just part of the cost of living in an increasingly urban society. What we’re suggesting isn’t that cracking up some helpless robot is superior or more imminent and urgent than violence, racism, or hit-and-runs; but rather that it’s part of the same condition. The same day as Hitchbot was found beaten beyond repair by a vandal, the Washington Post published an article that got little mention on the Sunday news programs: a report by the United Nations Children’s Fund, on the well-being of children in 35 developed nations found America ranked 34th out of 35th in in relative poverty among countries surveyed, below all of Europe (except Romania), Canada, Australia, New Zealand and Japan. Around the country violence is up, compared to Europe and Canada it’s off the charts. Internationally our schools are not performing well and we still have millions without healthcare. Perhaps most alarming, the level of wealth disparity in our nation at this moment is virtually without historical precedent, worse even than the gilded age by almost all measures. No vast distance exists between violence towards some collective good and violence towards our citizens and our once-sacred institutions. While there are echoes of this all across the US (notably water rights and fracking), Philadelphia, which is one of the most segregated and violent big cities in the United States, is a particularly striking example.

Imagine that NASA sent a probe to a distant planet – Philadelphar – to see if there’s intelligent, civil life there. Upon arriving, the probe was beaten beyond repair, to NASA’s horror. Imagine too, that upon realizing what had transpired, a collective of Philladelpharian natives built a new drone and sent it back to Earth, while others mocked its destruction and the intent of the probe to begin with. NASA could rightly conclude that the goodwill of the small collective of natives represented the decency and intelligent civil life they had hoped to find, but NASA would also be wise not to visit.

Rebuilding Hitchbot is a nice thought and hopefully it happens, but it also misses the point. The experiment (at least in this phase) has concluded, and it ended with Hitchbot’s destruction at the hands of erstwhile human collaborators. The point, “it could happen anywhere” seems silly when put in conversation with the fact that, “yes, it could have, but it didn’t. It happened here. Not in Boston. Not in New York City. Not in Germany. Not in the Netherlands. Not in Canada. It made it through all of those places unscathed. It happened here, in the heart of an American city. A city located conveniently between this nation’s political and economic capitals.” Sure, it’s an inanimate object. But to cling to apologism, to write and laugh this off is not only insulting to Hitchbot’s creators and fans, it misses the opportunity to learn from Hitchbot’s last lesson.

Hitchbot’s creators have not released the final footage, perhaps as it would needlessly traumatize his international fans. According to their website: “We have no interest in pressing charges or finding the people who vandalized HitchBOT; we wish to remember the good times, and we encourage HitchBOT’s friends and fans to do the same.” It’s important to remember that Hitchbot was never about individuals; it was about people generally, and it would be wrong to focus on any one person now. So while we may not know the specifics of what happened in the early hours of Sunday morning, we do know a few things: it happened in a major American city, one of our oldest and most defining American cities, halfway between our nation’s financial and political capitals. We know it happened in the oldest part of this colonial city. And we know it was a tale of two robots: one, an embodied GPS designed to rely on decency, generosity and collaboration, the other, a Philadelphian — it could have been a UPenn grad student or an intoxicated Eagles fan; a developer or a drug addict, it makes no difference here. Programmed by wealth inequality, insecurity, anger, ignorance and likely intoxicants, someone went off on Hitchbot. Some speculated that Hitchbot was torn apart to harvest the material value of his parts, (which would not have been worth much), or maybe Hitchbot was killed because someone thought it would bring momentary satisfaction and a few laughs. Or, as looks increasingly likely, maybe the social experiment was hijacked by a few pranksters in an attempt to get a few more YouTube hits and free publicity. We don’t know. But this fact is undeniable, these two robots met, one walked away alive, and humanity lost.

Perhaps too much has been written on this incident already, but it would be a shame to miss out on Hitchbot’s last lesson. People around the world and throughout history have time and again proved, when given the option, humans overwhelming choose decency and collaboration, even when it doesn’t always make sense. On Sunday, a few individuals reminded us that culture and place can deform, that mis-education and circumstance could be toxic. But the Pope is coming! So let us find Hitchbot’s remaining feet, wash them and reflect for just a moment, and remind ourselves and each other: when confronted with something other, with something different – when in doubt, let us remember to err on the side of decency, and listen…

Special thanks to Jon Lawhead and Dan Estrada