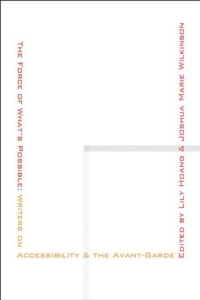 “Higher than actuality stands possibility,” wrote Martin Heidegger in Being and Time. Though this statement is part of an introductory comment on phenomenology as a method, its implications for the constitution of human being echo through the book, the existentialism it inadvertently unleashed, and beyond. Heidegger’s now-famous decree could suitably serve another purpose: as an axiom of the literary avant-garde. By definition, the avant-garde’s interest lies not in the actual, but in the possible: not in what is, but in what is to come. The avant-garde is always asking: What’s next? Other questions necessarily attend this one: What’s the meaning of what’s next? How can what’s next expand or subvert what’s here? What’s the point of it all — the now, the next, and the question? The avant-garde, in prizing the possible, is always asking about — everything. Possibility and asking: fundamentally, the two intertwine.

The Force of What’s Possible: Writers on Accessibility & the Avant-Garde dwells in this essential intertwinement by asking about the possibilities of the literary avant-garde. The book, edited by Lily Hoang and Joshua Marie Wilkinson, collects more than 90 short pieces from living experimental writers. The editors aim to re-awaken the avant-garde by interrogating it. “I am interested in expanding the discourse,” writes Wilkinson in the introduction, “finding new modes of thinking through what writers do, and trying to interrogate the assumptions about the practices of writing.”

This anthology is oriented by questions; the method of inquiry that stands behind it makes this fact explicit. The editors solicited contributions with a note filled with questions, prefaced by two brief polemical statements: one by literary critic Marjorie Perloff, the other by philosopher Alain Badiou. Perloff’s: “by definition, an ‘avant-garde mandate’ is one that defies the status quo and hence cannot incorporate it”; Badiou’s: “It is better to do nothing than to contribute to the invention of formal ways of rendering visible that which Empire already recognizes as existent.” The five questions that follow ask about the avant-garde and its relationship to accessibility, politics, the unconscious, and artistic practice. These questions animate the entire collection.

As for the answers: the responses vary to an astonishing degree, which is a testament to the power of Hoang’s and Wilkinson’s initial inquiry. Perloff’s and Badiou’s theses echo throughout the book without drowning out others: some of the contributors address their claims directly, others incorporate them subtly, and plenty ignore them entirely. The breadth of the questions posed allows each writer to focus on whatever most immediately concerns her. Stylistically, the pieces range from expository essays to incantatory prose poems. Because of their thematic and formal diversity, the contributions resist easy categorization, and the editors wisely chose to arrange them by the authors’ names — alphabetically, thus agnostically — which allows the reader to evaluate each piece on its own terms, rather than as reducible to a mere set of positions.

Amidst the polyphony of perspectives, certain suggestions recur. One is the notion that the writer, in the act of writing, must be single-mindedly absorbed in the work, separated from any direct contact with abstract questions of accessibility, political responsibility, or an “avant-garde mandate.” Dan Beachy-Quick writes, “A poem’s formal life is my primary concern, never the same twice.” Jeremy M. Davies emphasizes “surprise and pleasure and form.” Alta Ifland puts it the most bluntly: “I write neither for the ‘avant’ nor for the ‘post’: I simply write.”

Innumerable other threads carry through the collection, illuminating the editors’ questions from varying though often overlapping angles. But the most powerful and revelatory moments in The Force of What’s Possible are those in which the contributors renew and expand the terms of the questions themselves. Many contributors consider the fraught implications of concepts that might appear simple and already understood. Take accessibility. Joanna Ruocco argues that when we ask whether a text is accessible, “we’ve already accepted without resistance a particular understanding of texts. They are locked. I may or may not have the key.” Her alternative? She writes, “I try to see the text as a structure that always stands before or behind me, that brings a site into being which allows for the event of my reading or writing.” Others find the idea of accessibility fertile rather than limiting. Craig Santos Perez and Aurelie Sheehan each separately note, “Access is power.” For Perez in particular, this makes the question about avant-garde writing’s accessibility a political one with a political answer. He writes, “Poetry is a site of sharing, struggling, and recognizing the coloniality and aesthetics of power.” Elsewhere, writers interrogate the term avant-garde itself, from its historical usage in art movements to its military origin. For some, the term empowers; for others, it restricts.

The collection’s interest in questioning the terms of its own inquiry connects directly to its greatest direct contribution to the contemporary American literary conversation: an argument for the avant-garde’s ability to promote social justice. Recently, conceptual poet Kenneth Goldsmith highlighted the way in which avant-garde writing can support white supremacy when he performed an edited version of Michael Brown’s autopsy report as “The Body of Michael Brown.” As has been convincingly argued elsewhere, Goldsmith appropriated black suffering to further his own white artistic renown under the guise of artistic experimentation. He is not the first and likely will not be the last avant-garde writer to think himself somehow beyond the trappings of racism, sexism, classism, homophobia, transphobia, and other intertwining systems of oppression. But The Force of What’s Possible demonstrates that avant-garde writing can and should help us move beyond the systemic injustices of the status quo.

The avant-garde’s radical political potential suffuses the collection, but it’s realized most explicitly in two pieces: in TC Tolbert’s, and in the one coauthored by Amber DiPietra, Jen Hofer, and Denise Leto. The latter reinterprets accessibility in terms of the privilege of being able-bodied. In part, it’s an argument for the importance of difficult work in a world that is unbearably difficult for many who inhabit it: “Can we imagine a response other than ‘difficulty,’” they write, “in the face of what we think of as the givens: a world where the privileges of the few are maintained through inexorable and violent means, at the expense of — literally — everybody?” Tolbert’s piece gives an account of the importance of avant-garde work in the process of gender transitioning. These lines astonished and moved me:

It is not an exaggeration to say that I transitioned (from female to something less visibly so) partly because the avant-gardes . . . gave me permission to interrupt the narrative, the confidence to experiment with form. Trans and queer coming out stories are important to me, but even more encouraging, and less prescriptive, has been the work of Gertrude Stein, Stéphane Mallarmé, Marcel Duchamp, Trisha Brown, Shen Wei, and C.D. Wright.

These accounts suggest that the avant-garde is not merely another tool for the privileged to continue oppressing. Rather, the avant-garde — as a subversion of the status quo — demands that we fight against the systems that perpetuate such oppression.

Of course, not all of the pieces are as good as the ones I’ve discussed — or at least I did not find all of them useful. Some I found pretentious, un-generative, or ungenerous. Different pieces will, I think, speak differently to readers at different places in their thinking. As many of the anthology’s contributors remind us, what’s “accessible” depends on context. What this book has to say to you will be in part determined by your familiarity with the history of literature, philosophy, and criticism. But each moment of opaque erudition is an opportunity as much as an obstacle: the writers quoted or alluded to in this book could comprise a potent list for further reading. And the book demands further reading, for it answers its questions mostly with more questions. If, as I’ve suggested, we can understand the avant-garde’s vitality as coincident with deep, original, and productive inquiry, then The Force of What’s Possible suggests that the 21st century avant-garde is alive and rich with possibility.