Things I Read in the Last Month (or So): am i being revolutionary yet

Fiction:
Is the novel dead?

I’ve been a gamer for a long time — longer than even I knew, for a while influenced by a bullshit definition of gaming as playing first person shooters or racing games. Or, at least, the Sims. I know so many women who love to play games and struggle for recognition from both the video game industry and the toxic, boiling sea that video game fandom can sometimes be. Being, in my head, a “casual” or “non-social” gamer, I worried naming myself a gamer would somehow work against their fight for respect. But I was wrong. As my friend Ezra told me: someone that likes to play Magic, The Gathering on their iPad as much as I do is definitely a gamer.

Okay, this is me, I’m a gamer. I’m still incorporating that into my full sense of self. But I’m not casual, I play games every single day. And I really, really like text-based games. I’ve played/read three excellent text based games in the last month (or so), an obsessive track kicked off by A Dark Room. A role-playing/resource-allocating mystery game, A Dark Room is available on iOS or browser. You play by clicking the screen in various patterns. You begin with a black screen and words appear: “the room is cold.” then “awake. head throbbing. vision blurry.” then “the room is freezing.”; the only thing available for you to do: light fire.

After lighting the fire, a stranger appears out of the darkness, declares herself a builder and a friend. The game begins as you stoke the fire, gather wood, and build huts to attract settlers. It isn’t until you’ve got a village going that you start to notice that the world is slightly off, slightly sinister, and what seems like an ancient setting is actually a dystopic future. The narrative of the game unfolds like a mystery, as you explore the land surrounding your village and try to figure out who — or what — you are.

I recommend A Dark Room for people who like: The Road by Cormac McCarthy, Ursula K. Le Guin, Joanna Russ, “I, Robot,” or anything slow-burning and creepy.

I played A Dark Room obsessively, beating it twice on iOS and once on Google Chrome to check out the different play experience. Then I watched videos of play-throughs. After you beat A Dark Room once on iOS, a new section appears with audio commentary about the development of the game and its narrative, well worth a listen.

After A Dark Room, I switched to a couple of browser games made using Twine, a tool for text-based game development. The first, Sacrilege, was developed by Cara Ellison who said of the inspiration for the game: “I wanted to make it about the heart stopping drudgery of being heterosexual in a world where heterosexuals are conditioned not to talk to each other, or listen to each other, or really have any idea what they are doing.” You play a young woman in the club, presented with four choices of dudes to seduce. To approach any of the men, the game directs you to click the following text command: “initiate fuckplan.” Fuckplan is the best new word I know.

The text in Sacrilege is rendered in text/gchat-ese, or poetry. No capitalizing, words sometimes in paragraphs and sometimes in staggered lines. The background is pink and the text is black or yellow. Sacrilege is a short game — you can play through all of the possible scenarios in well under an hour — but it’s also sharp. Heterosexual dating as a woman sometimes feels like an unwinnable game, and Sacrilege captures the desolation and desperation of a system that traps you in a cage.

I recommend Sacrilege for people who like: Emily Gould, The Love Affairs of Nathaniel P., the British version of “Skins,” and House of Mirth.

In Depression Quest, you play someone who is struggling to maintain a job and healthy relationships while bogged down by depression, the intensity of which waxes and wanes depending on your choices. The most striking feature of the game is that at the end of each page, when it comes time to make your choice about how to continue, at least one potential course of action is crossed out, to mimic the way depression makes it impossible for people to perform the healthiest or most positive behaviors. If you grow more depressed in the game, more choices become unavailable. As I played, I felt more and more pained that I couldn’t choose the best for my character. Sometimes, I made healthier choices in the game than I would normally make in my real life, and I felt a wave of guilt. I wondered why I was doing better by my character than myself.

The background color of Depression Quest is gray and each page contains around 200 words of text, more than any of the previous games I’d played. With extra room for scene-setting and characterization, the narrative pulls you in more deeply.

I used to love Choose Your Own Adventure books. For a period of time when I was a child — I can’t remember how long, but it was significant enough to stay with me all these years — I would go to the library once a week and check out a certain set of books: one Sweet Valley High book, one Nancy Drew book, one “regular” book, and one Choose Your Own Adventure. I would spend so much time on each Choose Your Own Adventure, marking my place with fingers and pieces of paper, so I could go back to different points of divergence. My goal in reading them was to follow every single possible path at least once. I considered that “reading the whole book.” Two decades later, I’m the same person, and I read text-based games the same way as I read those books. 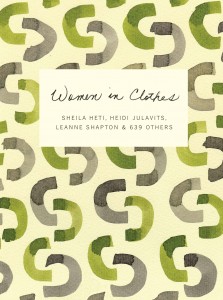 Another reason I have a hard time identifying as a gamer is because I’m a dilettante and identifying myself as having a strong interest in anything is dangerous because my attention may shift. People still think of me as “into beer” after I spent three solid years swimming around in that scene, even though now all I drink is white wine and clear liquors diluted with soda water (or sometimes a pickleback).

Right now, for example, I’m really into my clothes — and who knows how long that will last? For years, I dressed horribly out of a kind of negligence and dislike of my body’s shape, but was always kind of into “dramatic pieces.” In the past couple of years, though, I’ve really started to pay attention to what I wear. I’ve turned into a full-fledged clothes person. Dangerously, because this interest might go away at any time, I’ve been talking about clothes a lot — especially the past month, as I’ve slowly been making my way through Women in Clothes, edited by Sheila Heti, Heidi Julavits, and Leanne Shapton. The idea for the book came from Heti, after she fruitlessly searched for a nonfiction book where women she identified with talked about how they dressed. She teamed up with Julavits and Shapton over Skype, at first, and they pulled together a volume made of short segments in the form of conversations, essays, survey answers, or images-with-captions.

In my last column, I wrote about how, in the specific, a writer can capture the universal. This happens in Women in Clothes. The scope of Women in Clothes is huge; the variety of voices represented is enormous. No one book can be everything, but Women in Clothes makes ticking a lot of boxes seem effortless and emotionally/narratively necessary instead of like, well, the perfunctory ticking of boxes in the name of some kind forced diversity. There is nothing in Women in Clothes that feels forced. The voices given their own stage, their own space to speak, (importantly: edited by Heti, Julavits and Shapton, but not expressed through those women) include the voices of trans women, women of color, lesbians, voices of women from dozens of countries and six out of seven continents, queer women, women who dress in certain ways for religious reasons, women who work in the fashion industry, women who work in the garment factories where all the clothes are made, and so on. The feeling this tenor invokes in the reader is one of universal sisterhood (sorry, dudes); a profound and earnest connection. The connection between you, the reader, and every other women does not feel like something new that has been created, but instead like something ancient that you have been reminded to look at once in a while.

Reading Women in Clothes, I felt calmed. I have a very anxiety-ridden, racing mind (probably there are no signs of this in my prose), and so I covet the occasional book that has a narcotic effect. Does “narcotic effect” make this seem like a negative thing or a defense mechanism? I mean it entirely positively. I like to be calmed; it happens so rarely. Women in Clothes has this effect on me. It’s unusual for something so feminist not to make me feel angry and helpless, so I appreciate that as well. (And if you are looking for something else to dull the panic, An Everlasting Meal by Tamar Adler also did the trick.)

Women in Clothes inspired me to make a strange little playlist of three songs: “This Woman’s Work” by Kate Bush, “Celebrity Skin” by Hole, and “Supermodel” by Jill Sobule (from the Clueless soundtrack). The best way to consume this playlist is to learn all the lyrics and sing along at the top of your lungs, performing your best imitations of Kate Bush, Courtney Love, and either Cher, Dionne, or Tai as you like. If you follow these instructions, you’ll find yourself, as Molly Lambert put it, “embracing duality, like all women.” This will make you feel whole.