The Bad News is Good News 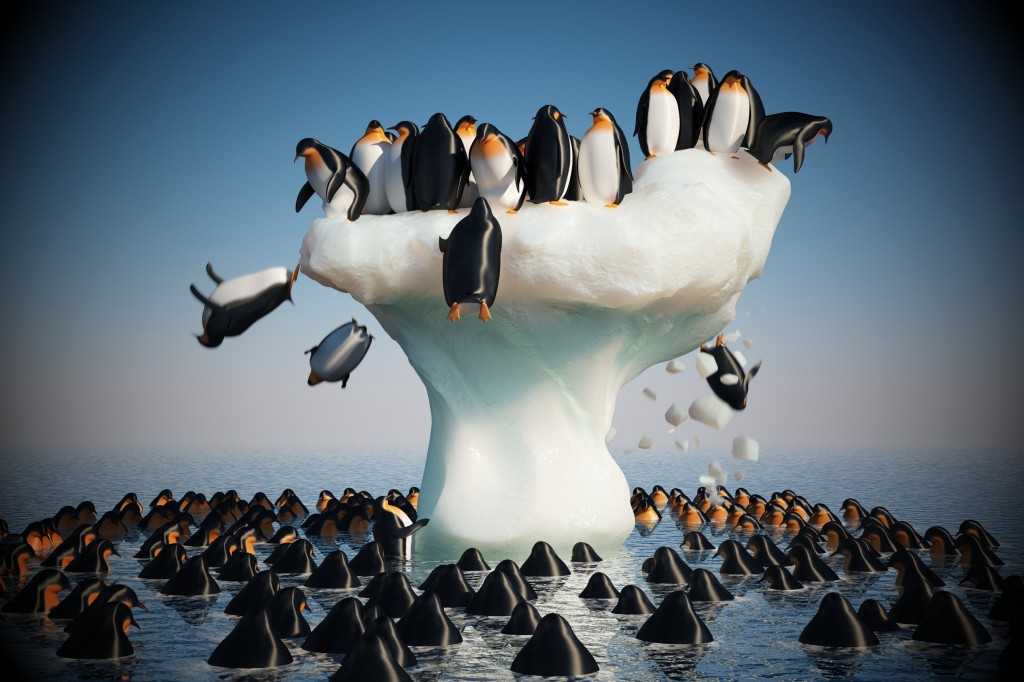 Two years ago, on this very blog, I wrote that worrying about climate change in an apathetic world was driving me crazy. I compared the feeling to living inside a Kafka story: it is clear to you that the apocalypse is coming, but everyone around you is acting freakishly normal.

That feeling hasn’t disappeared completely in 2014, thanks to the Republican party’s stupendously ignorant stance on the subject. But things have changed in the last several months. On the scientists’ side, The International Panel on Climate Change (IPPC) released its latest and most dire warning in three parts starting last September, generating a flurry of headlines each time. The American Association for Advancement of Science (AAAS) launched their unprecedented “What We Know” campaign, designed primarily to inform Americans about the scientific consensus on climate change.

On the journalism side, the New York Times’ climate coverage included “Rising Seas,” a stunning combination article and photo gallery documenting the effects of climate change as they are already being felt around the globe. Showtime began airing its climate documentary series “Years of Living Dangerously.” And on Earth Day, The Nation devoted 100 percent of its content to climate change.

And in politics, just this week the White House released its remarkably polished and modern-looking National Climate Assessment, which President Obama himself publicized on Wednesday when he was interviewed by weather forecasters from around the country. His message: climate change is not just the future; it is affecting us now. On Friday, he had solar panels installed on the White House roof.

Well, actually, a lot of the news is horrible: we are racing toward climate disaster and have less than a decade to formulate and implement severe fossil fuel reform before the worst damage becomes inevitable, according to most reputable scientists. But it is good news that the country’s information aggregators are picking up on the urgency: the “news” is getting better at disseminating facts and ideas about climate change.

For me, the sudden flood of climate change stories generates relief, not terror: the world is finally acknowledging, on front pages and in top stories, the truth that scientists have known for a long time. Media representations are aligning with reality, even if that reality is still invisible or only barely discernible to non-scientists. I feel less alone.

But how climate media affects me doesn’t matter. I’m the choir.

What matters is whether the new density of climate news is reaching people beyond the core of climate nerds and, more importantly, whether the new information is causing people to change the way they think and behave. Unfortunately, I don’t see much evidence that the heightened volume (in both senses) of climate warnings is having much impact — yet.

The right wing pundits respond by adding a ring to their increasingly outrageous denial circus, as a core of them will continue to do come hell or (literally) high water. They are paid to deny and are therefore a lost cause. Watch “Years of Living Dangerously,” though, and you will see that some conservatives, from pastors to politicians, are starting to accept the science behind climate change. But of course, although I watch “Years of Living Dangerously,” I can’t get my boyfriend to sit down with me for a single episode. It’s possible that a lot of people just skip the climate headlines, too — that people who aren’t predisposed to be interested in the climate don’t read far enough to discover how dire the situation is.

Even worse, there are the thinkers and writers who have read some of the news and have succumbed to despair. I am thinking especially of Katha Pollitt’s oddly flaccid Earth Day column, which is titled, rather obviously, “Climate Change Is the Tragedy of the Global Commons.” In it, Pollitt essentially says that we are too late and the planet is doomed to suffer. She writes: “When I see a long article…about melting glaciers or flooded coastal plains or disappearing species or deforestation or desertification, I skip it. Why? Because I already know what’s happening and about to happen.”

What arrogance! More importantly, what nonsense! Pollitt is not too wise or too sensitive to inform herself about the damage that we humans are inflicting on the earth and on ourselves. She just doesn’t want to take the time to trouble herself. Imagine if someone said the same about racial injustice, or the right to abortion or contraception: too hard! Let’s give up. Pollitt takes the same attitude toward climate change that one of my flailing 18-year-old students took this semester, as I wrote recently: the problem is too big to solve, so he wasn’t going to bother trying.

Fortunately, significant portions of the younger generations, which will have to live longer with the consequences of climate change than Pollitt, are less lazy and more optimistic. Thanks to the efforts of the student group Fossil Free Stanford, that university has now pledged to stop investing in coal companies. The student group Divest Harvard is refusing to be silenced by that university’s draconian administration and last week blockaded a campus building in an effort to get a public hearing. The public will to fight climate change is getting stronger in this country, not weaker.

In a recent NPR interview, climate warrior and 350.org founder Bill McKibben was asked whether he thought climate activism was on a downhill track. His response gives me shivers: “Five years ago, I was utterly bleak about the prospects for change. No longer, because I’ve seen people in every part of the world, but especially this part, start to rise up and find their voice.”

Two years ago, my voice on this subject was bleak, solitary, terrified. I’m still scared now. We all should be: the work required to solve this problem is vast and strenuous. But with every passing month, it feels more and more as though we’re in this mess together, as though our perceptions are aligning with reality. Bad climate news in the media is good news for the growing climate movement.