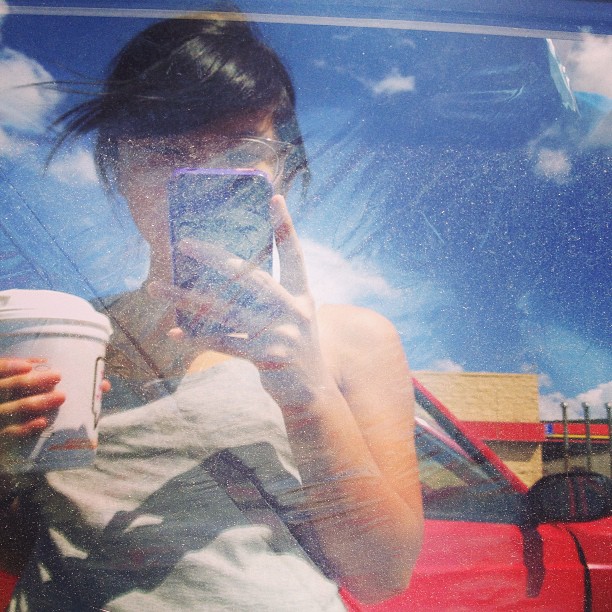 I am standing on a dirt trail that winds up a lushly forested hill, somewhere in Wisconsin, holding my iPhone in one hand and my friend Cameron’s car keys in the other. I tap the screen, pointing the camera at my white sneakers and the red dust that’s beginning to settle on them, then pan to the trees and the trail, recording my halting progress up the hill until it gets too steep and I have to use both hands for balance, scurrying like a mountain goat up the overlook. Cam is waiting at the top, hand shading his eyes surveyor-style, his phone out, too.

“Sorry it took a while,” I tell Cam, handing him the keys. “It’s steep, and I was vine-ing.” The six-second loop is still playing in my hand, while we’re talking. My feet, the trees, the path, the achingly blue sky. “There’s no service up here, though.”

“This is great,” Cam says, meaning the view. We’re at the Black River scenic overlook, in Wisconsin, on day two of a five-day race across the country. We’d stopped at the overlook to take a break from the road, but disappointed by the paltry view available from the official observation point, we scrambled up this hill, our shoes slipping from lack of traction. It’s my first roadtrip through middle America, and I am entranced. As a primarily coastal child, there is so much of this country I have never seen before. To make it official, I snap two photos: one of our sneakered feet, planted on a rock atop the crest; another gathering the dim blue horizon, the waves of forest below, and the crown of trees that surrounds us in every direction. 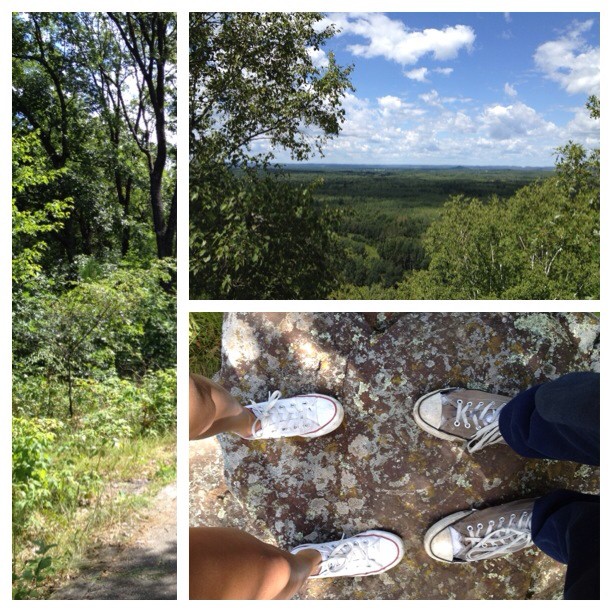 Then I put my phone away and the two of us breathe in the clean air for a little bit, in silence, until it’s time to go back down through the woods again.

“How’s our insta game?” Cam asks, as he turns the key in the ignition.

“Strong,” I say. In the passenger seat, I’m collaging the photos together, applying a filter—“Caption?” I ask.

“I was thinking—something like, ‘They’re not hiking boots, but they’ll do,’ referring to our shoe photo?”

Miles away, on phones and laptop screens, Cam and I are popping up every few hours, our smiling faces, the landscapes we see, the songs we played, the videos we took playing on endless loop. The friends who couldn’t come with us send us their love—or at least, their likes. I compile an album on my phone: “Snaps of America,” it says.

Through Minnesota, we roll the windows down, I stick my phone outside, and we play dance music so loud it makes our ears hurt. Playing the six-second video back, there’s Cam’s grin, my face reflected in the side-view mirror, the echoing rush of freeway and the endless house beat repeating itself, looping again and again. Our nighttime arrival in Cleveland is commemorated by a video of the illuminated car dashboard, backed by The National’s “Bloodbuzz Ohio.” In Indiana, we drive past a field of sunflowers, the first I’ve ever seen, and I rush to take a photograph, tweeting it a few minutes later.

The whiskey we drank, the sunflower seeds we ate and spat, the places we slept: all make it into the digital backlog forming behind us, a froth of pixels left in our wake. My phone becomes part of the ritual of the road trip. Every morning, when we leave our chosen city at eight or nine, I nudge Cam to lean over from the driver’s seat. “Lean in,” I say, “We snap.” I always grin, he pulls a grimace, I caption it with something, and we send it off to our friends. We’ve saved everything we sent, too, so that we can scroll through all the oddities of the trip together, months from now, I imagine.

I am acutely aware of how technology informs memory, how it constructs it. Throughout the trip, I became the de facto archivist, collecting and displaying the bytes of our lives on at least four different social mediums: Instagram, Twitter, Vine, Snapchat. Does that sound millennial to you? Are you cringing as you read this? Do you, perhaps, feel as though we lost our trip as we were experiencing it? It’s impossible not think of that Wendell Berry poem, “The Vacation”:

Once there was a man who filmed his vacation.
He went flying down the river in his boat
with his video camera to his eye, making
a moving picture of the moving river
upon which his sleek boat moved swiftly
toward the end of his vacation. He showed
his vacation to his camera, which pictured it,
preserving it forever: the river, the trees,
the sky, the light, the bow of his rushing boat
behind which he stood with his camera
preserving his vacation even as he was having it
so that after he had had it he would still
have it. It would be there. With a flick
of a switch, there it would be. But he
would not be in it. He would never be in it.

The first reading of this poem is a cynical one. The man, filming his vacation, fails to have experienced it: “He showed/ his vacation to his camera.” The boat is swift and the poem itself is swift, reads swift, the enjambment forcing you to keep continuing, line after line, until the vacation is finished. And you are left with the dull end: “But he/ would not be in it. He would never be in it.” The man, then, has preserved something completely outside himself. Reading this poem, we shake our heads—silly man, should have lived his vacation to the fullest. Experienced it completely. Now he’s gone and left it in audio/visual. 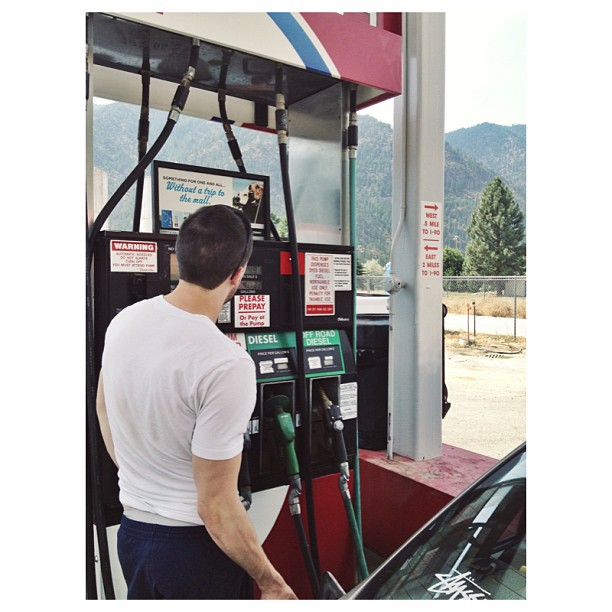 On trips, I often have the uncanny sense that I am creating a narrative as I live it. Maybe part of this is from just writing so much—it becomes how you do things, how you frame and construct your life. But perhaps it is also a natural way of interacting with new space; making this new territory your own. You ascribe stories to your surroundings so that they feel like yours. Jotted notes from a train station in Paris, or in my case, thumb-tapped notes on my iPhone of the sunsets we drove into, five nights across America. Without a narrative, spaces collapse. Even events need to fold themselves into some kind of order: Cam is a philosopher, and if I ever argued with him about time, he could probably convince me that it doesn’t exist. I mean to say, chronology is just as arbitrary as anything else in this grand and disjointed universe, so why not make a story, to hold it all together?

So, over five days, Cam and I created our narrative. From the beginning, we knew it was one that has been played before: the American road is far from untrammeled. But in that creation we found real joy in the experience—in the preservation, in the interaction. Our places became special to us for what we did in them—the creepy motel in Portage, WI, where I asked him at least three times if he was sure, really sure that we weren’t going to die there; our lazy, makeshift dinner of carrots and hummus under Montana moonlight. What we saw, around us, above us. Even now, in writing this, I am adding a veneer to it, the shape of the thing. And when I wish to remember it, which is often, I can turn to the various feeds that our images are stored on and unspool the adventure the way we did it, just in reverse.

I am not in many of the pictures, it’s true. Cam, as driver, had his hands busy. There are a few photographs: with friends we met up with along the way; a shot of me perching on a lookout, on that crest in Wisconsin. And in the landscapes, where we moved as swift as Berry’s man on his boat, there is no trace of us: just the open road, the wide expanse of America. Fields of corn, swells of fat, grassy hills, dappled summer deciduous forest, the sheer and striking evergreen mountains that make up the Northwest. Through a car’s windshield, you can capture everything; if you leave out the frame of the vehicle, it becomes the untouchable canvas of the country, unmarked by story. That’s where our memories come in; where they prove most invaluable. 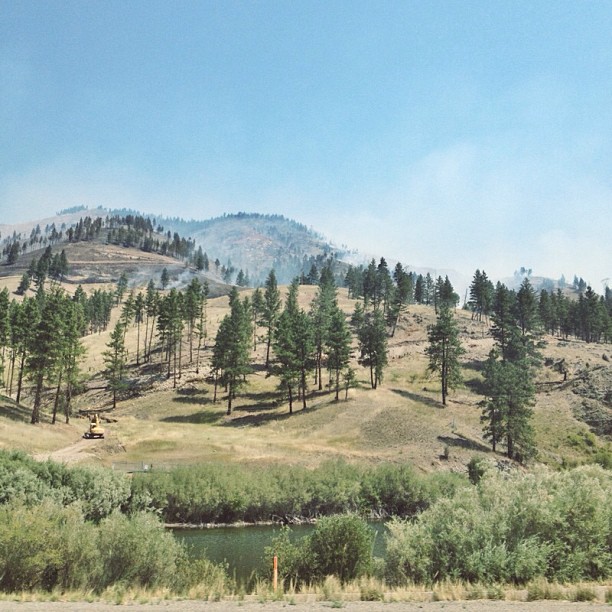 I think of the line in the Berry poem, before the jab of the finish: “after he had had it he would still / have it. It would be there.” After we had had our trip, we will still have it. “With a flick / of a switch, there it would be.” The poem is still cynical, but as long as my (digital) memory holds, that statement is true. In the face of relative existential impermanence, it’s comforting. There will still be the things that we saw and did that I did not put into the digital ether. For the rest of our lives, I will still be able to turn to Cam, and say: “Remember that time in Montana, when we…?” And on our last leg of the journey, driving from Billings clear to Portland, Oregon, I was so astounded by the beauty all around us that after taking as many photos as I could, I gave up.

Sometimes, the camera does not function like the eye. The first red sun I’ve ever seen, the startling rock faces that wrap around the freeway as you drive west. Sometimes, you must leave certain gestures and landscapes to memory. I think about Montana a lot. I think about the hills and the sky. The motel we stayed at; the tiny rabbit we saw walking back from Albertsons, crouching in a parking lot. There is no documentation of this except for what I have told you now. But we did live it. And I did live it. And we constructed it, it’s true, but we have also constructed it with more love than one constructs most things.