The Case of the General’s Thumb – Andrey Kurkov 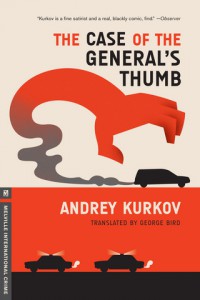 Tr. from Russian by George Bird

Throughout the often-confusing, character-stuffed crime novel The Case of the General’s Thumb, Russian-born Ukrainian writer Andrey Kurkov subtly and astutely comments on post-Soviet Union life. Originally published in Russian as Igra v otrezanny palets (Игра в отрезанный палец, literally “The game of the severed finger”; Russian does not distinguish fingers from thumbs), the book is out in a first English translation by George Bird. The translation has some inconsistencies — in translation versus transliteration of names, for example. Kurkov’s writing itself is unembellished, but Kurkov has a sharp sense of Slavic mood and culture, sprinkling his novel with accurate and slightly satirical commentary that is not easily recognized unless one is familiar with eastern European culture:

Zanozin jotted it all down, smelling strongly of fish.

One who knows Ukrainian culture well will immediately make the mental leap from fish to beer; many Ukrainians eat strong-smelling dried fish while drinking beer together. Offhand comments of this kind appear throughout the novel, lightening the mood but maintaining a cynical air: “Its thirst for petrol was of the order of a Slav’s for vodka.” I have been living in Ukraine as a Peace Corps Volunteer since September 2010, and these details strike me as only too true.

This undercurrent of cultural commentary carries General’s Thumb farther than the story itself, which is convoluted and confusing due to the masses of characters and lack of a clear premise. Alternating between the viewpoints of two characters, Tadzhik Nik Tsensky and Ukrainian/Russian Viktor Slutsky, the reader must try to keep each man and his cast of associated characters straight while also attempting to understand why they are investigating the murder of Bronistky, a former general and Presidential Defense Adviser. At the end of the novel I remained baffled as to why this man’s death mattered. What was the point of this book in the first place? The only comfort comes from the fact that Nik and Viktor are just as lost, “Like lost dogs. Lost, despite still having masters and food.” And indeed we are all led on a bit of a wild goose chase — or at least a chase for the wrong thing: “It’s billions we’re after, not killers.” Oh, is that what this was all about?

Set in 1997-98, less than ten years after the breakup of the Soviet Union, General’s Thumb, though overcrowded and often incomprehensible, does a commendable job of highlighting post-Soviet political corruption, ongoing Ukrainian-Russian tensions, and the infiltration of capitalism and western culture:

As in the Soviet past, bright new futures were elusive. Which didn’t mean that they wouldn’t come, only that some cost was involved. And in these infant days of Slav capitalism, anything good — bright future included — was extremely pricey. Free, gratis and for nothing was a concept of the past.

McDonald’s appears and reappears as a motif for the West’s influence and convenience-related lifestyle. Kyiv, Ukraine’s capital and the focal point of the novel, comes alive under Kurkov’s pen, though anyone unfamiliar with the city may remain lost.  The political situations and implications are also nearly indecipherable for someone not well informed on eastern European politics. Mystery men tell Nik and Viktor what their next steps should be. Despite being the central characters, they are really just pawns of some bigger, higher powers.

Kurkov takes us on a European tour of sorts, from Ukraine to Germany, Luxembourg, France, London, Cyprus, Greece, and back to Ukraine via the Black Sea and Odessa. We encounter language barriers that are realistic; Ukraine is making a big push to learn English, but there is still a long way to go.

While I was mired in the novel’s plot, the cultural and political commentary struck a chord with me. Living in Ukraine 15 years after its publication, I can understand a few of the undercurrents that Kurkov subtly brings to the fore.