The Book of Life – Stuart Nadler 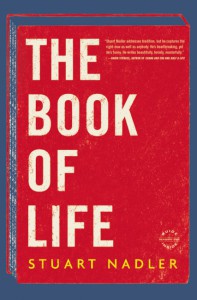 While each story of Stuart Nadler’s The Book of Life centers on a different man, the man is always fundamentally the same. He has lost something, is looking for something, and is hemmed in by the inevitable complications of his relationships. He is surrounded by uncertainty, sadness, and cheating. Catherine sets a trap for her artist boyfriend Henry to cheat on her with one of his nude models, convinced that this is the only way to see if he really loves her. Lewis sorts out his troubled relationship with his wife, who is sleeping with a man that lives in their house, amidst the return of their college-age son over Thanksgiving. Jonathan takes an awkward car trip with his estranged son whom his ex-wife has all but prevented him from developing a relationship with for the past 15 years. In each story, the man struggles with trust in his own way: in the bedroom, through secrets, between siblings, friends, and generations. But whether we are untrustworthy, distrustful or trusting, Nadler reminds us that there is always a connection, no matter how thin or how fraught, that threads people’s lives together.

Nadler also places emphasis on each man’s connection to Judaism, which appears as an anchor in the midst of the chaos of their lives. For the characters, no matter what occurs in the stories that compose The Book of Life, it is presumed that there is something larger beyond themselves; something none of these men seem to have found. They practice traditions in the hope that an external force exists that will give meaning to their empty endeavors and forgive their mistakes — or at least lessen their troubles.

And yet despite these themes of faith and trust, none of the stories offer their characters a conclusion or provides a moral. Each story ends as if with ellipses. The protagonists weather the storm and end up about as unhappy and as unchanged as they were at the beginning. Daniel represses the guilt of disavowing his family’s Jewish faith, only for it to return to haunt him after cheating on his wife. Abraham is seduced by his best friend’s 20-something-year-old daughter, only to find that his wife has slept with that best friend. Like these characters, we may or may not take away any lessons. But perhaps a book filled with stories from our own lives would leave any reader feeling equally as unaffected. Nadler shows that a book of life is not grandiose; it can be simply an amalgam of life’s banalities.