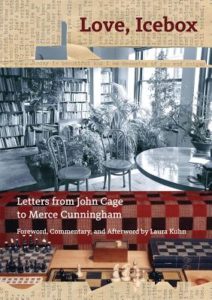 A successful collaboration is an unusually opaque and difficult organism, seemingly fantastical in its inception and even more improbably sustained. On its surface, any good collaboration arouses our irrepressible curiosity: How did it happen? How did it work? What did it feel like on the inside? This curiosity only intensifies when the collaboration also happens to be a romantic one. Love, Icebox: Letters from John Cage to Merce Cunningham lets us into one side of the storied 20th-century partnership between the composer and dancer/choreographer. As a collection of beautifully presented photographs and transcripts, the book expresses the foundation of the couple’s relationship, the development of Cage’s creative life, and the inevitable merging of the two.

The book comprises letters written from Cage to Cunningham from 1942 to 1946, forming a sequence of narrow but deep glimpses into the beginning of what would become a 40-year-long relationship. It also intersperses photographs of the couple’s art- and plant-filled loft — a space which will be familiar from late interviews with Cage or Cunningham. The scenes feel warm and lived in, filled with traces of their occupants: a table with three chess sets (small, medium and large), a well-used kitchen, the finish on the floorboards well worn in front of the sink, and James Joyce taking up a lot of space on a bookshelf. There are also smaller photographs throughout the book of objects from their apartment at the time of Cunningham’s death in 2009: A tiger, given to Cunningham by Jasper Johns, Cage’s mushroom hunting basket, and various books such as The Mushroom Feast, the I Ching, Synergetic Stew, and Wild Mushroom Recipes.

Through the images, our experience of Cage and Cunningham’s life together straddles two temporalities: its beginning, through the letters, and its end four decades later, through the photographs of their space and objects, which lend to the page an impression of their shared life. Many of the letters are also included as facsimiles, and are equally delightful as objects as they are deliverers of content. One photograph shows the contents of an envelope postmarked July 12, 1944, containing three cut-out strips of paper:

Through the photographs, the letters take their place as inhabitants of the space and pieces of the world of details that made up Cage and Cunningham’s life. As Cage wrote: “your last letter is so beautiful I cannot answer it, only read it and lie on it.” (July 12, 1944). The book aptly communicates the power of the letters as charged objects, capable of reaching across distances to let you touch something the one you loved has touched.

The book moves chronologically through its intertwining narratives. The beginning of their romantic relationship shares the foreground with a familiar narrative of an artist at the beginning of their career: working through doubt, the inability to work, and translating theoretical concepts into practice. As Cage begins to confide more in Cunningham, we see further into his interiority as an artist. Cage confides his many ups and downs with his muse (Calliope) and of the way he is beginning to be perceived: “i don’t like being great. it’s not good for my relation with calliope, who by the way, is not female, and looks exactly like you.” (July 22, 1944)

The early letters are playful and erotic, and still very much mixed with the quotidien aspects of their lives. Cage sends him medical articles to translate from Spanish (which both of them did for a little extra money) and forwards his mail. In between, there are moments that peek through the mundane: “I say I’m unsentimental but I’m sitting at one of our tables and looking at a mirror where you often were.” (June 28, 1943) Cage variously addresses his letters: Merce, Lover, and Prince or “Prince des Montanes,” his nickname for Cunningham while he was in the mountains teaching at the Perry-Mansfield Workshop in Steamboat Springs, Colorado. It will not be surprising to anyone who has read Cage that he can write about love in his own endlessly charming way. One particularly endearing example is filled with kenning-like compounds: “would be god-like to be in mountain country with you but am chained to city rock making music-fire. am having muse-luck, but like you beserk from lack of sex-love—letters are my bed and dream-stimulating. would fly by night if I could lie in your arms and explode against a tautness. need you.” (July 13, 1944)

The letters move from the playful and erotic into lonelier terrain, and as their connection deepens, the more he reveals the way he works (in spurts for long hours) and what bothers him (the heat, not sleeping). Cage also becomes haunted by his extreme loneliness and doubt about Cunningham’s feelings toward him. The sequence of letters ends sadly with two heartbreaking letters that, without our knowledge to the contrary, would seem to signal the end of their relationship: “That it would ever end, I never suspected, or could have believed. Your hating me is enough, I suppose. God knows what I will do with that and these feelings of love. No room is small enough for me to lie in.” (undated, probably hand-delivered)

Laura Kuhn, editor of the book and founder of the John Cage Trust, also includes accompanying notes that help fill in the abbreviated story the letters tell. Her notes diagram the web of acquaintances and encounters that is continually referenced, filling in a picture of the community of artists that Cage spent time with. The notes are simple enough to not dry out the emotionality of the letters with pure biography, but add enough so that those who have not memorized Cage’s long list of impressive friends will have a sense of the characters that appear. Occasionally, the notes also add her own anecdotes about her time with Cage toward the end of his life, providing moments of external perspectives on the otherwise entirely private correspondence.

It is impossible to separate the work of the artists from the shared life of two men in love, and this pairing is present throughout the book, both in its inclusion of visual details as well as its content. One exemplary moment is especially succinct: “need you deliciously. gas bill came but is nothing; do not worry about it.” (July 22, 1944) It is refreshing to situate the work of these two legendary creative figures in the midst of a real life. One particularly illustrative confluence is a paragraph that is handwritten on the back of a program for one of Cunningham’s performances: “I washed my rugs in bathtub (took 2 days). They are finally dry and look cleaner. I finished second piece for orchestra and am searching for the 3rd one. The lily shot up a foot and 1/2 + bloomed fragrantly.” (August 19, 1946)

The book is more a commemoration of Cage’s idiosyncratic charm and a celebration of their connection than a complex theoretical text. Instead, the private space of the letters offers a sense of his encounters with the ideas he would come to be known for and how they were situated among the other aspects of his life, and the scenes and company in which they took place. He describes listening to Satie’s Socrate with Virgil Thompson, which sparks a recurring concern about expressivity in music. He first writes: “There is no expression in the music or in the words, and the result is that it is overpoweringly expressive.” (July 3, 1944) Later he amends: “In one letter I said absurd things about inexpressivity; obviously wrong, but what i meant was that high expressivity often comes about through no attempt to make it or to express anything.” (July 22, 1944) The letters, through his closeness with Cunningham, are a way to see these thoughts form, rather than arrive at them already crystallized and certain.

Cage also thinks through his own compositions, describing almost day by day his progress in 1944 on each movement of what would become A Book of Music, a piece written for two prepared pianos. To Cunningham he is sometimes joyful, sometimes despairing. The relief of finishing the piece includes a relatable dose of self doubt and is immediately followed by the practicalities of the composition process:

“I HAVE FINISHED MY TWO PIANO MUSIC! And the curious thing is I am ready to start something else; my feelings alternate between thinking i have made some beauty, and think i have failed utterly. I will reserve judgment for you to make. Actually I won’t hear it until you do, because now I have to copy it on transparent paper which will take approximately 10-14 days (50 pages) and then send it to printers (another week) and then to painists (at least another week): so it is now a thing of the next month or so as far as ears go. I ran through the movements yesterday and although I couldn’t play the part worth beans we could see it was alright and has shape.” (September 1944)

A similar merging of the creative and quotidien occurs around the prepared piano, which appears in the letters as not as creative concern but jokingly, as a practical one. His neighbor tells him “..i should patent the prepared piano for apartment houses because it doesn’t bother them downstairs.” (August 2, 1944)

Even with our knowledge of the future, it is easy to fall into the intensity of the narrative as it unfolds, and the gut-punching heartbreak of the final letters. It is therefore comforting to arrive at the book’s ending: the afterword “Some 40 Years Later” by Kuhn. Along with photographs of Cage and Cunningham together, she describes the “established rhythms” of their long partnership and life together. Kuhn shares many of Cage’s wonderful idiosyncrasies through her own anecdotes, and ends on a surprisingly affecting and wonderful last moment (so affecting that I won’t do it the injustice of summarizing it here).

The afterword is an apt pair for the book’s first document: a stained, slightly rumpled note delivering a joyously exclamatory list of vegetables (“I have watercress! rugula! radishes!”) signed “Love, Icebox” —aptly chosen to lend the book its title. It is not the most communicative piece of correspondence in the book, but returning to it a second time, it suddenly expressed the heart of the book’s celebration of the connection of two larger-than-life figures. It is a note that, unlike the taut separation surrounding the letters, divulges the closeness of a life long lived side by side, told through all of the little pieces of the world that were just theirs.