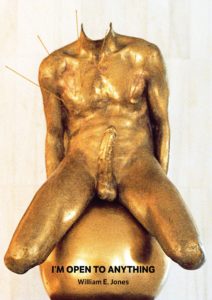 After calling for an ambulance, the narrator returns to the bedroom to stare at his father’s naked body. A long paragraph is devoted to describing his father’s penis: the coloring (darker and pinker than the rest of his flesh); circumcised or uncircumcised (foreskin intact); and length (at least eight inches long and six inches in circumference). The narrator notes the presence of a “drop of moisture” on the tip of the urethra, and contemplates the possibility that his father died with an erection. The reader is about to receive an estimation on the size of the testicles, but this calculation is interrupted by the arrival of the paramedics, who have difficulty navigating the gurney into the house. While assisting the paramedics through the garage — the front door proves too narrow to fit the gurney — the narrator realizes how small his family’s house is, how the “hallways were cramped, the doors narrow, the walls close.” “What an inappropriate thought to have in an emergency,” he thinks.

I laughed the first time I read this sentence. The narrator’s ascription of “inappropriate” to the realization of the narrowness of his home — which, on a logistical level, seems pertinent to the scene — and not to the extensive detailing of his father’s genitalia, seemed immediately humorous. And yet, after reading the sequence multiple times, I began to second-guess my own judgement. What was inappropriate about the narrator’s appraisal of his father’s naked body? And isn’t the shame of class, or rather, the fact that class and capital as a system makes us feel ashamed, inappropriate?  This reading experience provided a directive for how to read the book: leave all of your assumptions — sexual, aesthetic, you name it — at the door.

I’m Open to Anything is film and visual artist William E. Jones’ first novel. Jones, who works in a variety of mediums, has shown his work at the Tate Modern, MoMa, and the Louvre, and is the author of several books of nonfiction, most recently True Homosexual Experiences: Boyd McDonald and Straight to Hell, which examines early queer ‘zine culture. Provocative is one word you might use to describe Jones; he recently arrived to a reading wearing a t-shirt bearing the slogan “Make America Gape Again” printed over a photograph of a well-stretched asshole oozing out a wad of semen. It’s not surprising, then, that Jones’ first novel is narrated from the point-of-view of a fist-fucking top.

This argument obviously applies to the publishing industry as well, something which the narrator is fully aware of: “I imagined an academic or commercial environment rejecting what I wrote as pornography, yet I was compelled to write these unwelcome texts in my own way and on my own terms.” Although set in the late 80s, this sentiment still holds true: despite the recent success of some queer-themed novels, one is hard-put to find a novel with detailed scenes of kinky queer sex that has garnered mainstream attention. Materially, in 2019, I’m Open to Anything seems self-aware of itself as an outlier commodity in a literary marketplace; the cover is an image of a golden St. Sebastian, pierced with arrows, and equipped with an erect (and large) penis. The book, both in its physicality and content, poses a challenge not to conservative forces who would immediately shut it down, but rather to progressive and “open-minded” people who support queer writing — but only if it’s “literary” and respectable.

Most troubling are the racial elements of the book. The narrator states early on his affinity for working class men, an interest he developed from watching porn. Consequently, most of the men he fists are working class Latino men, particularly immigrants. The narrator himself operates under an unmarked whiteness, and the novel flirts with the question of racial fetishism: the narrator seems to have a proclivity for Latino men, and some of the Latino men only want to be fisted by white men. Racialized fetishism has been explored before — the work of Gary Fisher and M. Lamar come to mind — but Jones doesn’t do the work necessary to explore and critique racialized fetishes, or to ask how they exist in a society saturated by white supremacy. What the reader is left with is an unnamed White male narrator whose racialized sex remains critically — and problematically — unexamined.

I ultimately walked away from the novel challenged and amused, but also wanting a more fully-fleshed out book, one that spent as much time on its characters as it did thinking about film, history, and pornography. The irony was that in a book so laser focused on debates about what makes a piece pornographic or artistic, the novel often skimps out on the stuff that makes a novel a work of art: character development, plot, a narrative arc. Of course, all novels don’t share these elements, but wouldn’t it have been just as radical for the novel to fully inhabit the world of the sex radicals it so ferociously defends? In a recent interview, Jones said he’s at work on another novel. I’m open to seeing where he goes from here.

Joshua Gutterman Tranen is a queer Jewish writer. He lives in Durham, NC, with his dog, Maggie.