Where the Bird Disappeared – Ghassan Zaqtan 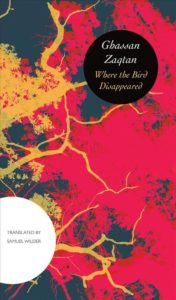 Samuel Wilder is a relative newcomer to Arabic literary translation: Ghassan Zaqtan’s Where the Bird Disappeared is his second book-length work. His first was also by Zaqtan: Describing the Past, which appeared in English in 2016. Both are startlingly brilliant re-creations of a prose that is at once eerily otherworldly and intensely earth-bound.

Another publisher might have paired an august writer like Zaqtan, one of the greatest living  Palestinian poets, with an august translator. After all, Zaqtan and Fady Joudah were co-winners of the prestigious Griffin Poetry Prize in 2013, for Like a Straw Bird It Follows Me. It was Joudah who suggested Wilder, a PhD student at Cambridge. As it turns out, the suggestion was inspired: the union of Zaqtan and Wilder produces a musical prose that should be held up to one’s ear to catch all its whispers and echoes.

If Zaqtan’s Describing the Past was a new sort of Palestinian autobiographical novel, then Where the Bird Disappeared, published in Arabic in 2015, is a new sort of historical novel. The book’s twenty-six slender chapters take us from just before the 1948 Nakba, going backwards through layers of time, and before a flash-forward to a time that might be our own. But time isn’t linear, and it’s in this way that the book resists both nationalist and anti-nationalist narratives about how a Palestinian people have progressed or failed. All times continue to exist inside the book, the pasts and the present interpenetrable. The characters don’t develop alongside a nation-state, but instead move along the paths dictated by their personalities and the landscape around them.

The narrative opens just before the fall of 1948, when more than 700,000 Palestinians were driven from their homes, and is built around three people who hail from the town of Zakariyya. The character who bears the same name as the town also bears the candle of the story. The other two are his dear friend Yahya, and Yahya’s beloved Sara.

When it opens, the three young people are headed off to a secret hideaway inside some ancient ruins. Yahya is an intrepid naturalist and explorer, and is often seized with a desire that carries him away from the village, “chanting like a moving tree.” He brings the other two to a monastery hideaway in Nuba Karam, the ruins east of town. When they crawl inside, they find a mosaic of Mary cradling her son on the ceiling, as well as a statue of Saint George, or Khidr, impaling the dragon.

In this moment, Zakariyya recalls the Mary sura in the Qur’an. “As he moved to each new verse, he felt another stone stair appear under his feet. Then the story emerged, like something found not invented, the calling of simple names that hung on the place like deep tattoos.”

In an act of friendship and generosity, Yahya “gives” the hideaway to his friend Zakariyya, saying to his him, “You are better than me, Zakariyya.” They are young, and in the next chapter-poem, we learn that Zakariyya itches to travel. He wants to go west, to one of the bright coastal cities, like Jaffa.

But then everything changes. In the chapter-poem titled “The Vineyards of Beit Jalla,” the town is suddenly “migrated.” The people congregate together outside the village, ghostly and changed. They are near their homes yet impossibly far. In “Ways of Return,” the ones called “creepers” head back into the village, while armed immigrants from Hungary, Russia, Poland, and England stand at barricades. The “creepers”:

…opened locked chicken coops to let the birds look for food, and freed calves, mules, donkeys and sheep from their cages and sent them to pasture. They loosed traps forgotten by boys in the fields and buried the dead they found in houses, vegetable gardens, village squares and fields. They locked gates and arranged the furniture in the rooms where they slept.

Each of these characters, both the creepers and those who remain outside, are caught between expulsion and return, in an endless no-man’s land.  Idris is the first among the creepers to be “sieved with bullets and coated in mud caked by gravel and straw[.]” This is also where we meet a number of Arab Jews, such as a Palestinian Jewish girl named Rivka, an Iraqi Jewish translator, and a Moroccan Jew who is known to us as “the digger.” These characters inhabit a space between the non-Jewish Palestinians and the other migrants, more visible and knowable, although ultimately also distant.

In a move that’s reminiscent of W.G. Sebald, the narrative animates the histories of the buildings and objects it touches. When we see the citadel, we hear that, after World War I, “British troops were drying their underwear in the windows of their barracks in the Ottoman citadel at Artouf, where they slept on beds left behind by the long-vanished Turks.” Soon after, we see Israelis driving the army trucks of the English, the insignias not yet changed.

Unsurprisingly, Yahya is one of the creepers. In “You Must Tell Sara,” he is caught by the immigrant soldiers and shackled inside the citadel for three days. After his death, his head is removed and placed in a citadel niche.

The man we know as “The Digger,” who had “dark skin and a large wart on his forehead,” silently conspires with Zakariyya to allow him to sneak up and bury the head with the body. Memory persists in sharp flashes, and Zakariyya—who forgets many things—cannot forget the feeling of Yahya’s head in his hands.

Like Sara and many others from his village, Zakariyya journeys to the refugee camp at Arrub. This is a place Zakariyya might have loved, he says, except that it’s not his town. Somehow, the place he wanted to leave now commands him. “Like an untiring and bewildering hammer, it beat against his rest, cracked his former desire to leave, as if it were exacting revenge for his dreams. It turned everything into a strange yearning to return.”

Many things are transmogrified into other things: people change into horses, or sometimes into plants. Young Zakariyya’s name is changed into numbers on his refugee ID card.

He can’t bear to stay in the refugee camp. Instead, he travels to Jericho, where he finds work drying salt. There is a beautiful chapter-poem titled “Names of the Sea,” where we hear different things the Dead Sea has been called: “The Sea of Lot,” “The Salt Sea,” “The Sea of Mists,” “The Sea of Pitch,” “The Overturned Sea,” “The Sea of Sodom and Gomorrah,” “The Petrified Sea,” “The Sea of Zughr,” the “Sea of Satan,” among others. But it’s also “the Lake, as it is called by those who live in the cities and towns around it, with the indifference and familiarity caused by proximity.”

After this moment, sixty years pass in the flip of a page. In the chapter-poem “I Am Looking for the Grave of a Boy Named Yahya,” the town of Zakariyya is now called “Kffar Zakariyya.” It’s become a twenty-first century town of new houses and clean streets. Zakariyya is in his eighties, and he arrives at last, looking for Yahya. To him: “The scene seemed cold and dead, like a ruse, as if it might come loose at any moment from the place itself.”

Then he finds, on a bench, the same man with a wart over his eye, who once allowed him to sneak Yahya’s head into his grave. This elderly man excavates his Moroccan Arabic to tell his story, “as if he were bringing forth from his heart a fragile cargo that could be easily destroyed, to uncover it under the high sun, to let it breathe and run.” He remembers where Yahya was buried; the place has since become the site of a bus shelter.

There is neither forgiveness nor anger between them. Zakariyya “was past anger, satisfaction, curiosity, fear and regret. He had arrived where nothing happens.” The old digger’s sole desire seems to be to tell his story. And yet his story can’t end, as, “There are events that possess no power to reach completion.” To end the book, we can only go back to the beginning, to Yahya and Zakariyya and the ruins outside of town.

There are no great massacres in Where the Bird Disappeared, nor great wars. Even when the Nakba occurs, we are not there for the fighting. Instead, we turn a page and find the village “migrated.” One ruling power takes over for another, slapping their own symbols on the trucks, putting their names on the buildings, while the people try to keep hold of what dignity and memory they can. We experience the small, human losses that happened after the Nakba. Since these losses continue, there is nothing to be turned into an epiphany or narrative arc. The post-Palestinian happily-ever-after that Zakariyya encounters in his hometown, many years after the Nakba, was not an ending, but “a ruse.” Zaqtan’s narrative, in the end, suggests neither great triumph nor great loss. Instead he brings individual stories forth as a fragile cargo, while Wilder transmogrifies them into a clear, consonant English.

M Lynx Qualey writes for a number of publications, including The Guardian and Al Jazeera. She is also the editor of ArabLit (www.arablit.org).