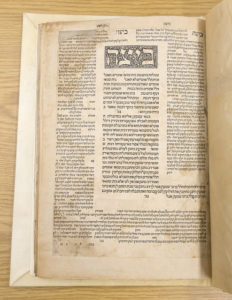 “The opening page Masechet Beitzah from the Bomberg printing of the Talmud” by Tom Thompson is licensed under CC BY 2.0.

“A woman is acquired by three means: money, a marriage contract, or sexual intercourse.” This is the opening law of Kiddushin, the tractate of Talmud dedicated to Jewish marriage law, and the tractate that my all-male yeshiva chose to learn in my second year. After my rabbi concluded his first lecture on the opening sequence, in which he provided proofs and biblical sources for each method of “acquisition,” I approached him, troubled. I had listened carefully throughout his lecture, hoping to hear him arrive at the conclusion that we no longer “acquired” wives—that this was an outdated nuptial model, now rejected for ethical reasons. But this conclusion never came. How, I asked him, could we justify purchasing another human in marriage, the same way—and with the same language—one would purchase a plot of land? My rabbi stared back at me, unfazed. His answer? Create a chakirah.

Chakirah: the term that had defined my first year. In yeshiva, where a student’s intellectual acumen is the only quality that matters, and where knowledge operates quite literally as power, creating a chakirah that can withstand Talmudic scrutiny is the ultimate goal. Formulated in late-19th century Russia as part of the “conceptual” approach to learning Talmud, the chakirah is a theoretical distinction drawn from any surface-level rabbinic disagreement. A chakirah refuses to take any legal argument at face value, but instead seeks to define the ulterior, often structural motives for any given legal position.

My memory of my first year is of spending countless hours agonizing over rabbinic texts, attempting to turn a seemingly procedural rabbinic argument into something deeper: for example, an argument over whether one is obligated to relight the Menorah candles if they are blown out became a theoretical disagreement over the nature of light. Much of this agonizing revolved around the weekly yeshiva-wide lecture, delivered by one of the four senior rabbis. On the morning of the lecture, source sheets of citations were placed in the center of the learning hall. Preparation involved pulling numerous volumes—many of which I had never heard of—from library shelves and attempting to decipher the arguments they contained.

If the weekly source sheet was a practice in improving our skills of reading rabbinic texts and attempting to guess the chakirah that would be introduced in the lecture, it also had another effect: it showed, through the sheer brunt of information, what we younger students did not know. Lack-of-knowledge shaped the backbone of the yeshiva ethos, where students were afraid to approach the most senior rabbis, and small seminars were handpicked and reserved for the brightest thinkers. Our unworthiness in the face of immense knowledge—a knowledge those rabbis possessed—created an environment where it became natural for an eighteen-year-old student to dance and sing a rabbi to his house on the night of a holiday, the verse great is he whose strength is in Him! ringing in the air, becoming confused about the referents of “he” and “Him.”

But something changed for me on the day my rabbi told me to make a chakirah to alleviate my question. By doing so, he let me in on a rabbinic practice to which I had not yet become accustomed but immediately feared: the use of rabbinic analysis to ignore an ethical impasse. The rabbi’s answer to the problem I presented was to theorize it away—not to address it, but to sidestep it, using the same tools of rabbinic analysis I had spent hours learning to attain. Before that moment, I had believed that Jewish law was meant to be a sustaining, moral force and that the critical interpretation of it served that same end. My rabbi’s suggestion threw this conviction into doubt. Once I watched my rabbi turn his back and refuse to address a problem, to use his authority and knowledge not to aid my inquiry, but to redirect my attention elsewhere, I began to notice this tactic deployed elsewhere. And elsewhere. And elsewhere.

This week, I was reminded of chakirahs and their power of abstraction as I watched the conversation about Avital Ronell, a theorist at New York University who was found guilty of sexually harassing one of her former graduate students, unfurl online.

Hours after the New York Times article detailing the case was published, a letter of support for Ronell, signed by many prominent feminist theorists, began to circulate through my Twitter timeline. In hindsight, I should have expected this; there are always support letters for the accused, and they are almost always hastily written and signed. What I did not expect was what followed: the number of queer theorists who not only voiced their support for Ronell, but published theory-driven accounts in her defense. In what has emerged as the most-discussed essay, one senior theorist argued that by focusing on this specific case, we overlook larger structural problems, as if we are only capable of investing energy into one endeavor and cannot do both. The essay also argues that the emails that were used as evidence against Ronell could be interpreted as a type of boundary-transgressing queer sociality, one that straight university administrators would not recognize.

Reading this essay and the supportive testimonies of other senior scholars, I felt gutted. Many of the individuals who I now read in horror had been some of the first theorists I’d encountered in my initial transition from rabbinic study to queer theory. I found this shift easier than one might imagine, because the two seemingly disparate enterprises are, in fact, shockingly similar. Theory and chakirah-driven Talmud study are both methods of abstraction that, dissatisfied with the singular event, seek to uncover the more fundamental actors and structures at play. Both methods trade heavily in citation and reading practices, in aligning different thinkers with different conceptual terms or fields. Both value novelty: the chakirah is the rabbinic equivalent of the scholarly intervention. And both, as it first dawned on me this past week, are practiced by individuals who are by all accounts brilliant but who can, at their worst, become blinded by their power, and through that blindness, wield that power to silence those who disagree.

I watched with dismay as my heroes posted their essays and tweets and as I began to comprehend the number of graduate students or untenured faculty who want to speak out against these scholars but are afraid to do so. In a moment of surreal déjà vu, I recognized in the actions of these scholars a version of what I had seen years before: the harnessing of their method’s rhetorical skills and training to unethical ends. I was watching the deployment of theory and institutional power to defend a harasser, defame a graduate student, and condescend to those who disagreed.

It took me several days to place this hurt, to fully understand why I was so consumed with the conversation surrounding the Ronell case, why it felt so personal whenever a new tweet or essay was posted. I hadn’t realized until this week how much of my rabbi worship I had transferred to these scholars, and how much they themselves were using their stardom and methodological expertise to influence others. It felt just like it had in yeshiva.

This is not an essay about abandoning theory, because theory is not an enterprise I see the need to simply abandon. From the beginning of this incident, prominent queer theorists—as well as many less powerful thinkers and academics, despite possible ramifications for their careers—have not only spoken out against Ronell, but have gone head to head with those who have deployed queer theory to defend her. These theorists have shown what Keguro Macharia, writing in The New Inquiry, described as “moral clarity” in a moment where so many seemed hellbent on obfuscation, and paved the way forward for theoretical conversations about sexual harassment that do not abstract or deflect from the problem at hand. Academia can at times feel monolithic, but it’s not rabbinic Judaism. For that, we should be thankful.

Betrayal leaves the betrayed at the crossroads of abandonment but does not make the final decision. In yeshiva, I saw no future for myself in rabbinics, no way to justify the ethical wrongs I saw around me. So I left. That is not the case with theory. Like every system of knowledge production, theory has the potential to do tremendous harm. But it also has the potential to liberate, to make new worlds seem possible. When I first read José Muñoz, I described it to a friend as a spiritual communion. In the time after I left Orthodoxy and found myself newly secular, queer theory offered a road map to understanding not only myself, but the institutions and systems I had just left. Like many other commentators on the Ronell case have noticed, what makes this case so upsetting is that it is the very theorists who have given us such lucid accounts of power who are now abusing their power. But this criticism also contains a kernel of hope, as it indirectly lays claim to what the enterprise of theory is, or should be: to trace how power operates, and to work toward defending those with less power. In that spirit, I offer whatever critique is embedded in this essay not out of malice, but out of both hurt and respect. Our teachers have taught us well, and it is for this reason that we demand better from them.

I do not know how this will all play out. What I do know is that in yeshiva, I was taught to pose a question until I found an answer. So here’s a sequence that might have no answers, or only ones that will be continually deferred. Either way, I find the questions’ open-endedness comforting in the possibilities they invite and the responsibilities they remind me of: Why are we theorizing; for whom; to what end?

Joshua Tranen is a queer Jewish writer and recent college graduate. He lives in Durham, NC, with his dog, Maggie.