But if all the world were a stage, what was backstage, what lurked in the wings, and where were the actors and the actresses when they weren’t on, and why did everybody talk all at once, and the people playing at war shout their lines while the people playing at peace were trying to read theirs, and why were only some shows sold out to an audience more often than not anxiously fanning their faces and drinking booze, because wouldn’t they be participants, too? And would there be music coming from the pit?
— Middle C

Every darkness is different.
— The Tunnel 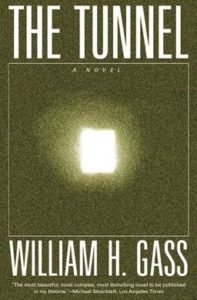 The death of William Gass in early December brought with it the sort of summing-up and oblique critiques that attend the loss of any significant artist. In the case of a “difficult” writer like Gass, this includes more than a little excuse-making for not having “gotten” or having even cracked the covers the writer’s works. Gass himself had a sense of humor about this kind of thing. In his introduction to a later edition of William Gaddis’s The Recognitions, he slyly acknowledges that the book gives its readers yet another opportunity to leave an elephantine novel with a convoluted plot and too much dialogue unread. The passing of so committed an artist and critic—as equally committed to both non-fiction and the advancement of the novel as was Virginia Woolf—feels as if it marks the end of an era. Though Gass glossed himself as a “decayed modern,” he was a forward-thinking figure who was a rock-ribbed traditionalist in many ways. He pledged his allegiance to modernist aesthetics in a distinctively American, postmodernist register.

Despite the veneer of difficulty in Gass’s spiraling, digressive, iterative sentences, both his shorter works and the three novels evoke many familiar writers in the canon. Gass’s often-noted admiration for Finnegans Wake provides a clue to the importance Gass placed on the music of language: consider the Joycean gymnastics of Gass’s On Being Blue, a romp through the cultural associations and history of a single color, in which the prose takes on a life wholly its own without resorting to abstraction. Yet the broad outlines of the novels themselves recall the familiar contours of the high-school syllabus. In Gass’s ouevre, the Edenic, Hawthornian fable of Omensetter’s Luck sits next to Middle C’s reverse-passing narrative of Joseph Skizzen, who masquerades as both a Jew and an academic, set in Sherwood Anderson country. Gass’s longer narratives recall no one more strikingly than Dostoyevsky, whose major novels’ plots turn on crime, transgression, or disguise. In addition, Dostoyevsky provides Gass’s profoundly damaged narrator of The Tunnel, middle-aged historian William Frederick Kohler, with a monological model in Notes from Underground.

Aside from the issues of assessing Gass’s prose itself, the subject matter of Gass’s most significant work, The Tunnel, presents even greater problems for the reader in its account of Kohler’s struggle to reconcile his life with his historical account of Nazi Germany. The book exists as its own object, which itself, sometimes playfully and sometimes sardonically, acts as both historical testimony and litany of personal obsession. In Robert Alter’s famously scathing review of the novel, he argues that the narrator’s textual preoccupations—his ruthless recounting of professional slights, his disgust with his and his wife’s bodies, his recollections of his dismal Depression-era childhood, all in addition to his alternately flippant and harrowing observations on the meaning of the Holocaust—threaten to turn everything into so much text, equating mere annoyances with gargantuan atrocities. Even more to the point, the conceit of the text recalls that postmodern flower of evil, Lolita, not simply in its maniacally precise language, but in its demand that the reader understand and to some degree sympathize with a central character whose hatred for everyone, including himself, pervades even his most idle thoughts, no more so than when casually composing limericks about Auschwitz with his equally jaundiced colleague, Culp.

That Gass reduced everything to prose is not the real issue; rather, it’s Kohler’s suspicion that all moral meanings assigned through historicization cannot be trusted. If everything needs to be understood in its specificity, in that very specificity it risks utter meaninglessness: “Can I believe I’ve any hold on history,” Kohler asks, “when I find my memory is made of marimba music, sack trash, and teapot trivia?” In comparison to the enormity of the Holocaust, who is Kohler, and who is anyone, to draw or assign lessons from it? In the end, there is only testimony, only brutal facts that can take the scope of colossal anguish, and in the end, that anguish evades naming. As if to explain his own hatreds, Kohler finds an ironic avenue of attack on the problem of American discontent through his creation of the “Party of Disappointed People,” complete with doodles of uniforms, belts, medals, and flags—a neo-fascist movement for the ones left behind by cultures, with nowhere to place the hate that they feel for their abandonment. Perpetually out of fashion, the PdP has no agenda other than the disenfranchisement from the cultures they think they used to own. In the mid-1990s, this appellation made little sense when applied to American culture at large: the pre-Internet economy was booming, a broad third-stream political consensus was in vogue in the US and Europe, and it seemed that totalitarianism had been finally defeated. However, Gass clearly saw this deeply ingrained anger born of isolation brewing in the middle of rural America, a preterite people nourished by the politics of enmity in a countryside where nothing was stable:

…there was another storm coming, then another and another, so that tons of topsoil blew out of Iowa and Kansas; in North Dakota the earth, as though souled, rose whining toward hell in its new location. And in the Midwest, that’s where hell is, if there’s any—outside the inside of its inhabitants. I mean, but why shouldn’t they be stiff and sour sometimes, suspicious, stingy, shut in, but murderous and catatonic. They can be friendly, too, when the sky’s not falling, but look at what lives over them, at what they must endure.

Gass’s suggestion that the monstrosity of the Shoah could easily arise from much smaller gestures of hate no longer seems, in the present, like a trivialization of genocide—it is a field guide to the unchecked regions where only anger can find reliably fertile ground. The Tunnel concludes with a narrative whimper, as Kohler’s wife Martha sternly admonishes him to clean all the drawers where he has been hiding the dirt he’s dug out of the basement. Like the little boy he still is, Kohler sheepishly mumbles the book to a close, realizing he (and the reader) have rolled in the mud too long, and that he will ”[w]rite no more propaganda for the PdP.” He is thoroughly shamed for his indulgence, and his desires and ideas are starkly shown to be as infantile as they have seemed.

To use a term once applied to Joyce, one could call the Gass of The Tunnel an adolescent “cloacal” writer, a collector of curiosities, a Rabelaisian hoarder of dirty words; unlike Joyce, the Proustian note Gass strikes is one of recovery and affection, even as he looks to the Midwestern skies for signs of the apocalypse. For all the bleakness and savage irony of The Tunnel, that work winds up reconnecting with the sympathy for human frailty visible in all Gass’s fiction. After railing against the arrogance of historicism and the pointlessness of ideology, Kohler is left with the hunger for the feeling of belonging that he has never found. The brief concluding section of The Tunnel, “Outcast on the Mountains of the Heart,” takes its title from an uncollected poem of Rilke; this last section includes a number of Gass’s own translations of Rilke’s early poetry. Kohler observes, as he mourns his inability to become the poet that he so fiercely desired to be in his youth:

…I was slow to realize how poetry created a permanent and universal present like a frieze of stone, and was therefore what any one of us might see and feel who followed its lines and felt its forms….The true poem is a community of words formed from the clutter of life, and by virtue of its ceremonies the true poem confers citizenship on all the modest items which cover, for instance, a work-torn desk like mine with their concerns…for when Rilke writes of being outcast on the mountains of the heart, he writes alike of my heart, your alp, my peaks, your grief…

The book prepares the reader for this final section, as Kohler references this phrase continually from the earliest sections of the text. He finds solace in the voice of Rilke, who moved from the objects and subjects of his Neue Gedichte to the soaring rhetorical metaphysics of The Duino Elegies. Like Rilke, Gass completed half of his masterwork near the very end, in one sustained frenzy of composition. Also like Rilke and many a Romantic poet, Gass found life and transcendence in the details of everyday experience, consecrated in prose It’s only fitting that his final novel, Middle C, is a grace note (forgive me) of a book, as close to out-and-out comedy as Gass got, devoted to modest rhythms of the academic calendar and dutiful praise and study of sacred texts. If heaven is barred to us in this life, at the very least we can be stewards of its music.

Marshall Needleman Armintor is on the faculty of the English department at the University of North Texas and teaches courses in British literature, postmodern narrative, and critical theory; his book Lacan and the Ghosts of Modernity: Masculinity, Tradition, and the Anxiety of Influence (Peter Lang) was published in 2004.  He maintains a website on Continental philosophy, theory, and late capital at posthegel.com.

The History of America in My Lifetime – Brooks Sterritt