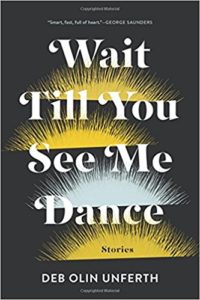 Depth of emotion and breadth of style are two major achievements in Deb Olin Unferth’s most recent short story collection Wait Till You See Me Dance. When a character speaks — in whatever formation be it omniscient, first, or even second-person — you yearn to listen. “There was a time,” says one narrator, “I lived alone in the crappiest neighborhood I would ever live in and had few friends and worked at a place where the people I saw were all quietly abandoning their plans, like I was. I had the faces of dying people all around me.” With this kind of unsentimental dejection, and the implied self-indictment, we are swiftly delivered to the heart of this and every story—a person’s small universe of pain. Characters like these have, despite their simple intentions, set themselves a stage of quiet disaster.

Common amongst them is a lack of purpose, a loss for how to be something, anything, for somebody. There is the above narrator from the collection’s titular story who understands her position (as a college adjunct) strictly as “. . . a thing attached to another thing in a dependent or subordinate position” — someone barely needed, but nonetheless needy. This remains true until she falls in love with an exchange student. There is the single, recovering alcoholic mother with her disaffected teenage son trying her damnedest to keep two turtles alive in “Pets”; she will finally get asked on a date. Davids, the protagonist in “Bride,” inadvertently breaks up a pair of newlyweds on his way to rescue the woman he loves from the family she happily made without him. The trajectory for such characters is this: loss, loss, loss—reprieve. The reprieve for many tends to be the return of desire—or, to put it another way, a resurfacing of hope. The narrator of “Wait Till You See Me Dance” offers this thought in relation to feeling love: “. . . I was just grateful to be feeling something.” Such an understatement is overwhelming in scope — and perhaps more powerful this way. A person can become numb to their lack, expanding the effectiveness of the bleakness. Characters seem to be waiting for some small lightening of the accumulation of low-stakes losses compiled over a period of years, entire lifetimes, missing deep connections.

As they await or pursue redemption for what they haven’t got, a narrative energy carries along even the most irredeemable of characters, resulting in a text that is pure levity. Stories exude a rich wit that lends the narration to high points of droll humor. Like Lydia Davis or Amy Hempel, Unferth senses accurately that misery contains a fair amount of absurdity — the things we do to screw ourselves over are ridiculous, the places we end up of our own volition are confounding. It is a human conundrum, one that, when investigated by Unferth, doesn’t seek to erase or obscure differing scales of human suffering, or the hierarchal nature of misfortune that can befall a person. What becomes recognizable through Unferth’s writing is that the unraveling of one’s life doesn’t just occur when overt catastrophe strikes; it unspools for most of us in slow motion, daily opportunities missed or ignored. This is what draws me close as a reader, and raises the question, Is there always something missing? Are we always inhabiting a space not quite complete, and is this, funnily enough, our own fault?

Counter-intuitively, the humor and ironic distance of Unferth’s various characters and narrators opens up a possibility for the reader to intimately respond to these voices crying out in the midst of emotional numbing. It allows the reader to build an emotional connection to even the most frustrating (Mr. Simmons, for example, in “Mr. Simmons Takes a Prisoner,” who is not a family man, but still very much the father of a thriving family). Some characters are so aware of their faults, that that very awareness itself becomes a fault, as in “Pets”:

Of course, she is aware, and seemingly doomed. Doomed, and damned, though Unferth’s touch loosens the chokehold of portentous fate, and the effect is some kind of beauty: the admittance that it takes so little for everything to go wrong, and the smallest gesture to set it right.

The possibility of what could have been returns repeatedly. In “How To Dispel Your Illusions,” we get despondent advice on how to manage your dreams once you inevitably realize how hard (impossible?) they are to attain:

. . . you are wandering the desert alone, picking up rocks . . . your gratitude for feeling desire is waning . . . You forget what it was like to not know what you want, and you find yourself drifting back to that space again, although you have come so far out, have passed so many posts that you don’t know where you are now, have no courage to go back and take another direction entirely — why should you if this is what it comes to?

But without these struggles we lose a narrative thread that connects us to the larger web of humanity. You can’t skip this stuff, it’s part of your story, perhaps even a good one if you apply a little distance. If misery plus time equals comedy, that same misery bedfellows up with other souls capable of a sardonic laugh at the self; this is better company than none, perhaps even the best. Don’t tell me it’s going to get better, just tell me that you feel it, too.

Besides Unferth’s voice and observations, there is her willingness to play with form, which also brings a lightness to the surface of gloom. While many of the longer stories are traditional in arc and structure (“Wait Till You See Me Dance,” “Voltaire Night,” “Stay Where You Are”), plenty loosen up even as they shorten in length. There is flash (“Fear of Trees,” “Yesterday”) and lists. “An Opera Season,” for example, summarizes the plots of classic operas in contemporary language, which heightens the comedy of serious human drama. The entry for number three (Jenůfa by Leoš Janáček) contains this frank retelling:

Jenůfa doesn’t end up with the one she loved forever in act one, but with the one who, about halfway through, stabbed her in the face. Neither one wants to marry Jenůfa. She isn’t likeable, for one. She has a stabbed face. And now an awkward baby.

Even if such an assessment distances me from the opera, it brings me closer to the narrator, in essence to the writer. And perhaps this is the effect I appreciate so much from this collection. Many of Unferth’s fictions feel like the thinnest of veils between me and her, without coercion. One of the best examples of this kind of connection is embodied by the surreal autobiographical first-person account of Unferth’s mother describing her most bewildering and precious child: Unferth herself. In “My Daughter Debbie,” Unferth, writing as her vexed mother, explains her daughter to us:

My daughter Debbie is a writer and it is such a relief to have her be something, because she was always something to me . . . I used to use her name as my password at work. She was just a tiny thing . . . and she was happy, not this silent, sullen mop she is now. Somehow she got away from me. I don’t know how it happened. She’s the one I know the least.

What makes a collection like this such a special medium is the flexibility it allows the writer to wield should she be able and willing to embrace the idea of possibility. Unferth is most certainly capable, being both well-trained and playful, self-deprecating and tender. As a reader, it is a pleasure to encounter someone so in control, and yet so willing to experiment. An intimacy develops. Wait Till You See Me Dance is not just a technical achievement, it is a human one. Under Unferth’s guise, the characters become not so much fabrications, but a kaleidoscope of the writer herself. To our benefit, Unferth’s heart is all over these stories; she’s right there on the page.