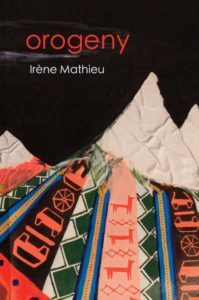 The orogenic process is colossal: it’s the mountain-forming collision of continental plates. Irène Mathieu widens the scope of her debut collection (which Megan Kaminski selected for Trembling Pillow Press’s 2016 Bob Kaufman Book Prize) to a similar magnitude; she aims to represent both human and geological history, ecology, religion, feminism, and racial injustice in a mere 85 total pages. Thus, these weighty topics insubstantially flash before the reader in quick succession, allowing little opportunity for deeper exploration and rendering the overall collection somewhat incoherent.

Orogeny sprawls in terms of subjects and settings, bounding across most of the continents. Mathieu’s speaker tours the site of a 1773 Guatemalan earthquake, illustrating “the nixtamal…the beaten sheets baking / next to the lime tree in the sun.” They traverse the United States, elaborating a “Midwestern fantasy Thanksgiving special” that “ends somewhere down the Mississippi / amidst fried chicken, chewed-up baseballs.” In the poem, “although winter in Chile, it was summer on Mars,” her speaker imagines women facing atrocities across the globe, picturing “a Gazan girl pulling up rubble…ducking from bombs…” and “an Argentine girl who isn’t really a girl, but a bereaved mother…shouting her throat raw what have you done with my child?!”

Although, Mathieu’s speaker isn’t entirely sympathetic to humanity. In the piece, “if all you can think of are the rhinos,” they rove to Africa to deplore rhino poaching and conclude:

the water balloon clouds want to

suffocate us. the homicidal sky.

did you hear the theory about

she’s better off without us.

no such thing as an outside force.

Mathieu’s speaker asserts that the planet heats itself to burn out humankind, just as a fever kills a virus. And justifiably so. In “estrangement,” the speaker catalogues images of slaughter such as “the cow quartered and slung / into plastic package” and “the exotic alligator skinned / and stretched.” Mathieu’s heavy enjambment, lack of capitalization, and visceral imagery throughout the collection recall Brenda Iijima’s Remembering Animals somewhat, but “estrangement” echoes it distinctly with its environmental focus, use of the passive, and sporadic typography. Iijima similarly staggers her lines across the page, also portrays “animals / extraordinarily cut.” One phrase in “estrangement” encapsulates the parallels between collections: Mathieu’s speaker imagines wildlife pondering about people, contemplating “what force / made us un-animal,” just as Iijima’s questions humans, “(when) did you cease to be an animal—?”

Mathieu perceives the planet’s creatures as helpless, but declares the planet itself almighty. She empowers the earth by featuring a panoply of elemental deities. The speaker refers to Aztec divinities such as the primordial earth goddess Coatlicue and the wind god Quetzalcoatl. In “the Orishas spend a day as humans,” they envision the Yoruba spirits in an array of scenarios, dreaming that “Oyá sat cross-legged with a hundred other women / on a mountain road the gold miners wanted to pass,” and “Yemayá was a community health worker who / was teaching new mothers to breastfeed.” Mathieu’s speaker highlights these rulers of the natural world to emphasize its dominance over humans, an apposite theme considering that orogeny produces mountains that tower over their puny, arrogant heads.

Mathieu acknowledges, however, that not all these heads are entirely humanistic; the speaker elaborates several of their flailing attempts at supplication. They illustrate a “church of the / advance cash title loans,” another church “dusted over / with peeling sideboards.” Human greed and neglect undermines such houses of worship. When portraying their grandfather’s past Christmases in New Orleans, the speaker quips, “there are things you could eat / or sacrifice, and someone would name / you a saint on account of either one,” and epitomizes the paradoxical conflation of gluttony and piety with the inquiry, “…isn’t the fork a way / to worship, too?” In “the weight and dimensions of my prayers,” the speaker examines their own spirituality:

the first time I found salvation it was

in a library, on my knees bent before the spines

of books. before I knew the weight and dimensions

of my prayers I imagined them as nebulous supernovae

Funnily, the speaker discovered redemption while kneeling between bookshelves rather than pews. They initially pictured their invocations as astral phenomena, but after acquiring knowledge from the tomes and witnessing humanitarian crises, they reimagine them as “prayers of lead / prayers of limestone…” They begin to visualize them as telluric elements. The speaker directs their prayers for victims of violence into the terrain, “asking the center of the Earth to put (their) pieces back together.” The speaker’s growing worldliness prompts them to conceptualize their prayers as terrestrial rather than celestial, to submit them into the soil instead of the firmament.

The speaker’s earthly veneration corresponds to the collection’s most pervasive deity: the last supercontinent, Pangaea. Mathieu’s speaker heralds Pangaea as literal “Mother Earth,” claiming, “Pangaea was the first woman. when the world’s water broke it broke over / her back and she uncurled and spread into the rocks and gaps that would / eventually become us.” She is the speaker of many poems, as indicated by titles such as “Pangaea explains the earthquake” and “Pangaea’s 16 questions.” She doesn’t coddle her offspring: in the piece, “Pangaea’s response to the Astronomy Department’s recent announcement that it has discovered earth eating stars,” she denigrates humanity unsparingly as “carbon preciousness,” stripping humankind down to one of its primary elements and belittling its sentimentality. Pangaea complains of the risk and strain that guarding humanity from the cosmos requires. She relentlessly exposes human vulnerability and obsolescence in the universe.

Despite Pangaea’s bitterness, Mathieu clearly exalts her for creating the modern continents. In the poem “pieces,” Pangaea defines birth by the fracture of the mother, begging the reader, “think of how I felt, / Atlantica cracking off / Gondwana,” and insisting, “you cannot imagine / the ache that wholeness, / rent, left.” Mathieu frequently orients images of gestation in the natural world; in “primum non nocere,” the speaker paints all mothers as hibiscuses “offering nectar / to any passing / hummingbird” and insists that a monarch butterfly “must fly / into the mouth / of a fetus.” The hummingbird probes into the mother to feed; the butterfly enters an orifice of the unborn child.

Such perverse bodily penetrations recur throughout Orogeny, and blood soaks through the whole collection. It gushes from punctures made by ticks in “prelude,” and the world tears a hole in the subject of “epidemiology.” Blood takes circuitous routes through human bodies, appearing again and again in violence and broken corpses. The speaker remarks, “my blood asks, do bones / carry future memories / in their marrows?” Orogeny proffers a Lawrencian mythology based on nature and the omnipresence (and occasional consciousness) of blood. Both D.H. Lawrence and Mathieu limn a communion between flesh and earth: Mathieu’s speaker declares, “the soul is made of decomposed / plant and animal matter,” and proposes that humankind once brandished a “spade until red clay yielded / drops of blood & later magic buttered fingers.”

Mathieu highlights predation based on race and gender: in certain poems, the objectification of women transforms female bodies into easily-disposed of dreck, and others directly respond to the murder of Ahmed Al-Jumaili and the arrest of Martese Johnson. The poem “our boy,” dedicated to black victims (of all genders) of police brutality, elevates the collection to brief thematic clarity. The orogenic process creates peaks, and the speaker of “our boy” (presumably a victim’s parent) contends that their child “was / the mountain.” Mathieu expands the metaphor when she likens the action of police shooting a victim to that of miners blasting into a peak, again underscoring the blood:

they say those blood

the bullet blew out

in the dark tunnel that

With this conceit, Mathieu centers the collection on this poem. Orogeny generates mountains; dynamite destroys them. The cycle is complete; the circle closes.

Or perhaps not. Although Mathieu pivots Orogeny around a piece denouncing racial injustice, she continues her collection for 48 pages after “our boy” to discuss its myriad of other topics. Aja Couchois Duncan’s Restless Continent tackles similar thematic breadth and intertwines geological and human history, juxtaposing the breakdown of Pangaea with Amerigo Vespucci’s desires to visit and claim the modern continents. Duncan’s speaker also venerates elemental power, advising the reader, “Ask Sky to help you. She is the end and the beginning.” Duncan’s speaker focuses primarily on the Americas, however, and on the oppression of Native Americans, whereas Mathieu’s traverses the globe and refers to the persecution of several different demographics. Restless Continent constitutes a much more uniform circle than Orogeny.

It’s apt that Orogeny isn’t quite a circle, since Mathieu’s speaker disdains the shape. They assert that circles trap them, lamenting, “…every day the labyrinth grows more / concentric circles, the burning tire flames / leaping higher.” They bemoan, “how can you write a new thing / in a universe composed of circles” (a maxim that Trembling Pillow Press prints on their bookmarks). The speaker refers to mirrors much more fondly, revering the subject’s “arms smooth and bright / as a mirror” in “if I ever get over the bodies of men.” In “ghazal for twins,” they romanticize that identical siblings “sang their every mirrored bone; each was the other’s christening.” The speaker seeks resolution through reflections rather than cycles, aspiring to hold this collection up as mirror to nature and humankind: a gargantuan task for just an 85-page mirror.

Katie Hibner‘s poetry has appeared or is forthcoming in journals such as Bone Bouquet, inter|rupture, Timber, Up the Staircase Quarterly, Vinyl, and Yalobusha Review. Her criticism has been published by Entropy, Heavy Feather Review, and New South. Katie dedicates all of her writing to the memory of her mother and best friend, Laurie.