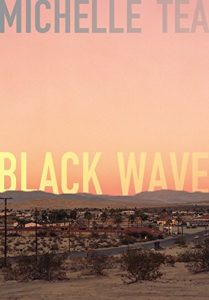 Reading Black Wave made me impatient with the literal day in which I read it, what with its uncomfortable chairs, coffee, texting friends — what with all its actual-day features. For the duration of reading Black Wave I resented my actual life, because I preferred my life inside the book to my life outside. This is not the reason I offer it to you. In fact I find it hard to forgive books that do this to me: addict me. Slyly, books about addiction love to do it, knowing that addicts can’t resist reading about themselves. Neither can writers, and Black Wave deals deliciously in self-obsession, writing, and addiction, that dirtiest triumvirate of a cocktail.

I Have to Get Back Into My Story, Michelle said sadly. It was hard being such a mess . . . I Can’t Wait For This Book To Be Over So I Can Be Sober Again.

What’s the book even about? Quinn asked. If you’ve removed the main story.

Michelle wasn’t sure. Couldn’t a book just be about life? Me, My Alcoholism, I Think. The Nineties. Being Poor. The Feeling Of It All.

If it isn’t clear already, Michelle is talking about this book, or its fictional analogue, the one she/“she” is writing and we’re probably reading. In Black Wave, this works on me — it’s exactly quick-witted, self-abnegating, light-touch enough to touch all my right buttons — and I’ll beam at you approvingly if it works on you too. The metafiction forges an airy, quick-shifting, surprisingly workable scaffold for its plot, in which the character Michelle attempts to address the wretchedness of her drink-soaked, partied-out, razed-love-affair life in San Francisco’s queer underground of the nineties, the Mission District — the same gloriously wretched life she immortalized in Valencia­ — by means of a new beginning, a move to L.A. The wrench Black Wave throws in Michelle’s plan is not simply that new beginnings are an escapist dream: the wrench, in this case, is that it’s the year 1999 and the world is literally ending. In the first half of the book, Michelle, like us, is so self-absorbed that she almost misses it. Here’s a scene that unfolds when she goes to the San Francisco DMV.

No more licenses till 2000. January and July there will be a lottery if you want to enter your name.

You Stopped Giving Driver’s Licenses? Since When?

January this year. The lady was bored.

How Was I Supposed to Know That? Michelle felt outraged . . .

It was in the news.

Here is the reason I want to offer you Black Wave: because in this era shot through with too-reasonable apocalypse fears, Michelle Tea speaks so ferociously and cheekily and ingeniously about apocalypse that the book ends up being an unlikely balm. In fact, Black Wave’s deftly complex achievement is that it turns apocalypse itself into a kind of balm. That sounds like a self-destructive, goth-adolescent dream—but Black Wave is nothing like that. Black Wave is an apocalypse novel grafted with a starkly opposing genre: the sobriety memoir. I’m astounded by the brilliance of this seemingly unworkable combination. The resulting book does not satirize either genre, though it playfully ironizes both — but it does so in order to celebrate them by making them new. This hybrid genre jars against itself at its heart: just as Michelle struggles into well-being, the world begins to end, and thus Michelle’s new wholeness becomes inseparable from the world’s dissolution. From there, Black Wave posits the apocalypse-times as a fertile ethical and political space. I won’t tell you what happens — but in Tea’s Los Angeles where the world is ending, Michelle encounters previously unimagined possibilities for sobriety, kinship, sex, and love.

All this is to say that Black Wave is a profoundly queer book. As you probably know, Tea has been writing about queerness for a long time. If you don’t already know, go pick up Valencia right now — your life will be richer and more interesting and better for it — that is, if you’re worthy of its intelligence. (My college boyfriend, like a cishet white graduate student boy will, mocked Valencia for being non-literary, i.e. beneath him — and then I found a copy of it under his pillow. “I love to hate it,” he clarified.) The queer Mission District that comes alive in Tea’s oeuvre is not only queer in that it is made up of women and gender-non-conforming people piling together into apartments, working shitty jobs and engaging in heartbreakingly inventive relationships — it is queer in that no established value system, no pre-set way of being, is allowed to retain its contours. Tea’s writing is queer in that it questions everything. Tea’s books are smart in that they unmake what we thought was intelligence. We need this right now more than ever. Like Samuel Delaney’s Dhalgren, Black Wave shows us why we should listen to old-school queers, for example — why we should listen to marginalized people — when we’re scared of the ways an oppressive mainstream can destroy our world. They know all about it, and they’ve been resisting, also known as making do, for a long time.

I forgive Tea and her Black Wave for subjecting me to narrative addiction, the way I forgive Octavia Butler and her Kindred, which did that to me too. You, too — if you’re scared and sad this year, read Black Wave, please, for your own good. Read Delaney and Butler, too. In an age that foregrounds despair, there’s bravery at the bottom of the barrel — the kind we might not yet possess if we’re late to necessity’s party. At the bottom of this barrel live practicality, love and comradery and real friendship. Glittering things, and they’re ours if we’re willing to reach into the muck. Black Wave has a happy ending.

Shamala Gallagher is a confessional essayist and poet with recent work in The Rumpus, West Branch, Black Warrior Review, Eleven Eleven, The Missouri Review, and elsewhere.