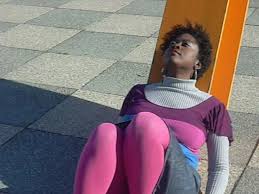 I remember seeing Karen Finley in New York City. She hadn’t swallowed any live animals (although it wouldn’t necessarily be beyond her), but she had stripped down to just panties and put her feet in a basin of water which (as anyone who has ever stepped naked in water knows) gives you the overwhelming desire to pee. Karen Finley calmly told us that was what had happened to her, grabbed a bucket, and peed right there into it on stage. It was shocking, but also liberating. It was the brazen nastiness of white girls that had always been intimated to me in my youth. (White girls, you know how they are… They’ll do anything. Pee in the woods, walk around butt naked in the showers. They’re loose, they’re easy, they’re crazy.) As a black girl, as a strong black woman, I was supposed to be appalled and superior to that kind of behavior. But at times, I was covetous. How come they got to do that? Where did they get that allowance? I had never seen a black woman do such things and wondered if it were even possible.

Years ago, I had an artist show-and-tell at my house. I’d started moving from poetry into performance and had just gotten a big grant to turn my experience translating a long Haitian poem into a new performance art piece. When Colin suggested swallowing the fish, something rippled in me. I wanted Miré to swallow the fish. I wanted her, a black woman, to stare down craziness, to allow herself to be crazy, to do something crazy on stage. Hell, I wanted to swallow the fish myself. To be as loose and crazy and unstoppable as those white lady performance artists like Karen Finley and Holly Hughes and Marina Abramović. I wondered if I could do it.

“If it’s necessary for the piece, then she needs to do it,” Colin had said. The realization of need. Going deeper, taking it all a step further. I thought of the time I showed my landlords, my two great, gay godfathers whom I adore, some segments from Divine Horsemen, Maya Deren’s documentary on Haitian vaudoun. One moment in the dance, the houngan, the priest, slits the throat of a chicken. You see its blood pour down to the earth below. That death is a necessary ritual that connects the worshippers to the spirit world beyond. My landlords were outraged at the violence, but I felt honored, stirred. We were witness to the transfer of one life to another, one energy to another—not for entertainment or shock value but for transformation.

Swallowing the fish would have to be like that.

To swallow the fish, you had to have something more than a reason. In a way, you had to reject reason itself. You had to have spirit (and perhaps spirits and the spirits too). Especially as a nice black girl, as a strong black woman. You couldn’t just get away with whatever. Hell no. You could be crucified for that, or worse, gain a bad reputation. Animal murderer. Race traitor. Nasty girl. Acting crazy. Acting up. Performing. Anything could happen to you. Anything could happen. It couldn’t be pretense or something to do for kicks. It had to be real. There had to be some black art, some power, some need and conviction that warranted that kind of transformation. A particular kind of magic…

In the end, Miré chose not to swallow the fish or even to use a goldfish in a bowl at all. She passed a bucket with a freshly caught trout through the audience, a hook still dangling from its lip. She told a story in the accent of a fisherman displaced from his home, tying hooks into knots in a net. Then she masqueraded as a corporate raider with a clipboard, planning a new corporate development on the site. She only did the piece twice, one weekend at Patrick’s Cabaret in Minneapolis, and hasn’t revived it since.

In the meantime, that goldfish (rippling wound or wound), the challenge to swallow it, became mine. It belongs to anyone moving toward the form of performance art, struggling to figure out what it means, what is required to do it, what kind of body and spirit you would need.

Gabrielle Civil is a black feminist performance artist, originally from Detroit, MI. She has premiered over 40 original solo and collaborative performance works around the world. Recent works include “…hewn and forged….” at the Salt Lake City Performance Art Festival (2016); “_______ is the thing with feathers” at “Call & Response: Experiments in Joy” (2014); “Say My Name” (an action for 270 abducted Nigerian girls)” (2014); and “Fugue (Da, Montréal),” at the Hemispheric Institute Encuentro (2014). Her writing has appeared in Small Axe, Obsidian, Asterix, Rain Taxi, and other publications. The aim of her work is to open up space.