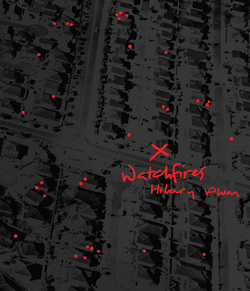 “Metaphorically speaking, are we now in the age of autoimmune disease?” Hilary Plum asks in her evocative, precise, and dexterous new book Watchfires. “Now the enemy is ourselves: we can no longer tell friend from foe; we mistake self for other.” Plum’s cross-genre book — which combines memoir, fiction, and essay — intertwines the story of her chronic illness (while her husband, the poet Zach Savich, is simultaneously diagnosed with and treated for cancer) with carefully researched reflections on medicine, marriage, anorexia, suicide, vulnerability, care, suffering, war, and terrorism. By bringing this wide range of sociopolitical issues into contact with her illness, she suggests that although they are not immediately apparent, commonalities begin to emerge when war and cancer, terrorism and autoimmunity, are examined in relation to one-another. Anyone with an interest in healing of all kinds (personal, medical, social, and political) will find much of interest in Watchfires, which makes visible the hidden ways that patient and illness, victim and perpetrator, are constructed in opposition to one-another, despite the ways that they are in fact mutually constitutive.

This is a text about the difficulties of living with a painful chronic illness, the fight to get a lasting diagnosis, and how these struggles are experienced when living in a nation fraught with violence, paranoia, and xenophobia. Watchfires also explores how these personal accounts of cancer and autoimmune disorder might illuminate the collective contemporary moment. In addition to delivering sensitive and insightful personal narrative and social analysis, this is also a text about writing itself, and Plum artfully splices autobiographical detail with meditations on the boundaries of the subject and the problems and pleasures of narrative, genre, and metaphor.

In the first section (which makes up three fourths of the text), Plum offers candid descriptions of her experience with an (initially) undiagnosable illness. By using the third person throughout this section, she creates a sense of distance, suggesting that her writing self and her ill self are separate, removed from one-another. Plum connects seemingly idiosyncratic personal experiences with sociopolitical contexts and structures even as she refuses to gloss over the complexities of these overlaps. For example, she shows how living with a chronic, debilitating illness might be similar to being a refugee because in both cases there is an acute sense that “the public [has been] cleaved from the private.” However, Plum is careful to acknowledge that while this feeling of “inexpressible schism” might make it easier for her and a refugee to “more easily imagine one another,” they do not actually have “an experience in common.” Through complex relations such as these, Plum uncovers the often unpredictable and unresolvable textures of lived experience. She shifts to fictional first person in the second section, which is told primarily from the perspectives of the surviving Boston marathon bomber and a female journalist who visits him in prison. By paralleling this story with a scene from the lives of a couple who are institutionalizing their young son (which in turn parallels a story from the first section about Plum’s discovery that her grandparents institutionalized her uncle), Plum illustrates the relations of care and vulnerability that exist not just between the mother and her son, but also between the journalist and the bomber. The brief third section of Watchfires returns to the third person, recalling Plum’s painful illness, her husband’s cancer diagnosis, and the potential that the act of writing has to intervene in these circumstances.

Watchfires resonates with the growing field of writers who use hybrid genres to explore the boundaries of the political and the personal. In this sense, her work is reminiscent of Maggie Nelson’s The Argonauts, Lauren Levin’s The Braid, and Eula Biss’s On Immunity. Her willingness to investigate the complexity of the discourses of war and terrorism and the ways that we are complicit in these forms of violence is compelling (because it treats writing as a project with high ethical stakes) and needed (in light of the emotional and intellectual difficulty of examining these questions in a sustained way). Plum deftly makes the case that metaphors of — and experiences with — cancer and illness may shed light on these sociopolitical problems. For example, she suggests that Crohn’s disease (a disorder in which the immune system attacks bacteria in the stomach) and the War on Terror both involve an attack on “harmless” foreign bodies. But she also mentions the possibility that this understanding of Crohn’s (and, by extension, of the war) could be incorrect, and that these foreign bodies may actually be “necessary” rather than merely harmless.

As a text about illness, Watchfires invites readings under the rubric of Disability Studies (DS). However, based on the sources that she cites (which do not seem to include any figures from DS or the Disability Rights Movement), Plum herself does not seem to identify with this field of academic study. Instead, the way that Plum represents her experience with disability serves as a reminder that illness and disability are still stigmatized and still carry negative associations in our culture — even for those who are very well-read or who have intimate knowledge about illness and debility. For example, there are moments where Plum equates the word “disabled” with a lack of dignity and where she suggests that physical disability signifies a lack of agency and an inability to speak for oneself. These representations of disability are quite different from DS’s and the Disability Rights Movements’ efforts to represent disability as an identity that one might claim for purposes of solidarity and empowerment and to enable people with disabilities to advocate for themselves. More sustained engagements with DS, such as those undertaken by Leah Lakshmi Piepzna-Samarasinha and Petra Kuppers, allow poets writing about illness and politics to question conventional constructions of agency that value independence over interdependence and to deconstruct the ableist underpinnings of our language.

However, like many in DS, Plum draws attention to the problematics of medical diagnosis and treatment. She emphasizes scientists’ and doctors’ reliance on language and storytelling when constructing their understandings of illness, and explores the mixed results of this reliance. Throughout Watchfires, Plum self-consciously plays with the ways that political and medical discourse mutually reinforce one another, dropping illness metaphors (“unemployment is a pandemic. Austerity kills,” “terrorism is a disease of Westernization”) in an unsettling way that seems sometimes sincere, sometimes tongue-in-cheek, and sometimes an echo of popular rhetoric. And this is likely one of Plum’s main purposes — to draw attention to our modes of speaking, seeing, and experiencing. In this sense, Watchfires is a book that will not only lead readers to reflect on the nature of illness, healing, war, and terrorism. Plum also asks us to rethink the material of our language, our narratives, and the methods we use to read ourselves and our world.

Declan Gould is a PhD candidate in the Poetics program at the University at Buffalo and holds an MFA from Temple University.  She is the author of the chapbooks Model Figure (Shirt Pocket Press, 2016) and “Like” or “As” (Dancing Girl Press, forthcoming). Her article, “‘I am/in pain’: The Form of Suffering in David Wolach’s Hospitalogy and Amber DiPietra and Denise Leto’s Waveform,” is forthcoming in the Journal of Literary and Cultural Disability Studies this Spring.