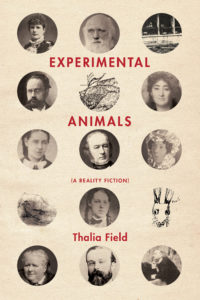 In Genesis, the second named attribute of human beings is our relation to other animals: “And God said, ‘Let us make a human in our image, by our likeness, to hold sway over the fish of the sea and the fowl of the heavens and the cattle and the wild beasts and all the crawling things that crawl upon the earth.’” In this account, our dominion over other animals separates us from them and defines us; it’s a fact as intrinsic to being human as our likeness to God. We are made for the very purpose of holding sway over a menagerie of heterogeneous creatures whose differences collapse in the face of their fundamental alterity in relation to us.

In her remarkable, category-defying Experimental Animals: A Reality Fiction, Thalia Field examines the relationship between humans and other animals in the laboratories of France near the end of the nineteenth century. Field focuses on Claude Bernard, a renowned physiologist whose primary method of discovery and demonstration was vivisection, the flaying of live animals. His method inspired a question, controversial at the time and still urgent today: is animal suffering justifiable in the name of scientific advancement and the improvement of human life? Experimental Animals animates this question in the context of its original framing in French laboratories, salons, newspapers, and letters in the time of the Second French Empire.

Much of this text  consists of juxtaposed passages, penned by Bernard and others in his personal and intellectual circle, from Victor Hugo to Charles Darwin to Émile Zola, and drawn from published works as well as archival material, ranging from correspondence to private journals. Claude’s wife, Fanny Bernard, narrates the book. Fanny virulently opposed vivisection and actively campaigned against it — and, by extension, against her husband. In an interview, Field highlights her discovery “that Fanny Bernard is almost entirely absent from ‘the archive’ — and thus official history.” In a bold and effective move, Field constructs a voice for Fanny that guides, cuts through, organizes, and interprets the chorus of male voices that comprise the bulk of the historical record. Fanny narrates her part of the tale to Anna Kingsford, a fellow anti-vivisectionist and feminist political thinker, whose writing is one of the few extant historical female voices on the subject. By subordinating the male voices to a woman speaking to another woman, Field complicates the over-presence of the male voice in the history that Experimental Animals documents.

Through this original and entrancing narrative strategy, Field raises and engages a fundamental question of Western modernity: what can science gain us, and what are its spoils worth? For Claude, who Field renders as the paradigmatic scientist, whose single-minded search for verifiable truth obscures all else, the answer is clear. “What morality says we can’t do to those like us,” he declares, “science authorizes us to do to the animals.” His understanding of science as an arbiter of values undermines the common view of science as amoral and merely instrumental. Science, with its aim toward objectivity and universality, tempts us to understand it as transcending historical conditions. By situating science in a precise historical frame — practiced by a host of historical personalities, according to a historically developing and hotly contested method — Experimental Animals argues persuasively that science, like any other human activity, is inextricably tied to the conditions of its conception and practice.

The book is most powerfully affecting in the moments when it becomes most difficult to stomach: its frank recordings of the reality of vivisection, the hands that practiced it, and the thinking that justified it. Early on, Fanny narrates how Claude, after failing as a medical student, found success in a private course on vivisection offered by medical professor François Magendie:

Stepping forward, live cat held against the table, Claude wins a glance of Magendie’s praise for his dexterity and showmanship, the ability of his finger to peel through wet and palpitating muscle, leaving tendon, nerve, and blood vessel intact. Unlike medicine, which relies on returning people to health, and unlike anatomy’s lackadaisical sprawl, Magendie’s physiology stakes a duel directly with death — the thrill of following a nerve or pulse as far as it will go in a gasping, surgically disassembled body.

In these moments, Field’s prose brings to life the visceral vitality of the “gasping, surgically disassembled body” in a way that repulses but also acknowledges the reality of the physiologist’s “thrill.” Field uses the physiologist’s unsettling appetite for knowledge as a way to subvert his sharp distinction between human and animal; Fanny considers the continuity between humans and the dogs she rescues from the Paris streets: “Curiosity is man’s first temptation, but it is every dog’s birthright, to seek each smell, to dash in pursuit of unseen quarry. We humans may cherish science as an idol, an evil Moloch even, putting discovery in the palace of love — but don’t say animals lack similar appetites.

Field poses the question of non-human animals’ suffering in relation to the suffering of other marginalized others. Fanny’s narration to Anna Kingsford makes clear Experimental Animals’ feminist concerns. In the first pages, Field explicitly links the marginalization of women to the marginalization of animals. After a scene in which Claude slices into a dog’s spine and announces, “Thus we open our book!” Fanny retorts, “A dog is not a book, and neither, by the way, is a wife: our pages sit blank — the dogs’ and wives’ — our lives neither exactly forgotten, nor remembered.” Throughout the book, Field explores this link between men’s silencing of women’s voices and animals’ silent suffering (a double suffering, for they lack speech, and the experimenters cut their vocal cords to silence their cries). Later, Field brings other political implications to the fore: “When I confront him,” Fanny writes, “Claude says that pain exists only in conscious creatures — lacking thought, there is no suffering. Animals, Negresses, Jewesses, are all said to have less of it.”

Just as Field expands the possibilities of the meaning of animal, she also explores a broad view of the meaning of experimental. Set in an experimental political age, rife with revolution, Experimental Animals speaks to the complex relationship between natural science, ideas of political progress, and nationalism. But the conception of experimental that Field is most eager to explore is literature’s. As Experimental Animals documents, French literary discourse of this time was highly influenced by ideas borrowed from natural science. Most strikingly, Émile Zola’s The Experimental Novel proposed a vision for the novel that precisely mimics Claude Bernard’s vision for physiology. This is only the most extreme instance of literature’s use of science in this period to explore the possibilities of literary empiricism, naturalism, and realism to shed light on the world with natural science’s exactitude and rigor. “Since medicine is becoming a science,” Zola asks, “why should not literature itself become a science, thanks to the experimental method? […] Just as Mr Claude Bernard transferred the experimental method from chemistry to medicine, so I transfer it from medicine to the drama and the novel.”

Field explores Claude’s own artistic ambitions — he started out as a playwright — and the connection between the performativity of his plays and of his experimental demonstrations. An ancient Greek motif — of Aristotelian ideas about tragedy, including catharsis and recognition, and quotations from Aeschylus’s Prometheus Bound — recurs throughout, and Fanny’s thoughts on this theme suggest its use for thinking about the place of centered and marginalized voices in historical narrative: “My dear Anna Kingsford, you and I also had humble origins and miserable odds, but as women we could only watch from the chorus. Power may excite fear, but only action, crusty old Aristotle warned, centers the drama.” Fanny links this line of thinking back to her situation near the book’s end. When Claude dies, she observes, “The chorus may ignorantly believe that once the hero dies, the situation just ends — but instead we watch helplessly as new heroes spring up, each more determined than the last, to claim Claude’s mantle and his methods.”

Riffing on Zola, Fanny writes, “In a fictionalism of facts — a factualism — the fait-alisme — the story accretes from facts, from news, from research, from local gossip — until this facticity […] provides not just a ‘slice’ of life but the whole thing.” These thoughts function both as analysis of nineteenth-century attempts to bring the scientific method to literature and as commentary on Experimental Animals’ own mixing of fact with fiction. In this blend of quotation and imagination lie the book’s greatest achievements as well as its most serious failures. In its best moments — the opening and closing sections are easily the most riveting — Field balances these voices and uses Fanny not only to speak on her own behalf, but also to synthesize and analyze the historical content. But when the book lingers too long in the archive, its subversive, creative energy dwindles as it begins to settle for merely staging ideological conflicts, but failing to push them beyond the framing of an intellectual situation. Such moments are all the more frustrating for their insufficiency compared to those in which the book’s strange conceit bears brilliant fruit. In the same way, when Field over-relies on the archival voices to the detriment of the text’s energy, the dullness is all the more glaring set aside the striking vibrancy of her own prose.

Experimental Animals is capacious and complex. Powered by Field’s incisive intelligence and formal ambition, a book with a narrow historical and thematic focus unfurls into an expansive tome that offers insight on a stunning range of contemporary concerns. The book is also flawed: its narrative lags for long stretches in its attempt to encompass too much; its prose often wanders unproductively; its formal agnosticism at times cuts it off from both the novel’s and the essay’s modes of efficacy in a way that detracts from its clarity of vision. The book draws formal inspiration from vivisection: Field slices into the dead matter of the historical archive and dredges up its guts for organization. But like the physiologist, she misses something of her subject in the method of cutting and classifying. I wonder: in her attempt to tame the potential maelstrom of the archive’s polyphony of voices, does Field inhibit the uncertainty and disorder that energize the essay and the novel as forms? And does this inhibition, this drive toward excessive cohesion — as in the perhaps too neat parallelism she draws between animal rights, feminism, and racism — restrict Experimental Animals’ capacity to succeed as a text that plumbs a political moment’s human chaos? Even so, for all its imperfections, which are themselves as provocative as its triumphs, Experimental Animals remains an original and penetrating literary, historical, and philosophical project that attends to the complexity of the ethical, epistemological, and aesthetic concerns it raises and respects the voices — human and otherwise  — that have been permitted, prevented, or unable to speak on them.