this is the fugitive – Misha Pam Dick 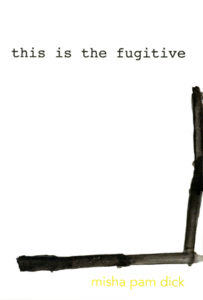 Misha Pam Dick’s this is the fugitive reads like a transcript of thought-parts that have been spit out above Georg Büchner’s cranium as Misha — or “minna, misha, minka, mia, myrna, mikaela” — straddles Büchner’s shoulders. Both of them hurry through their respective subway cars of time: Büchner flees 19th century Germany, juggling Spinoza and Descartes and churning out a few plays and a novella; Dick paces around 21st century New York City, thinking through Büchner in the context of our surveillance state governing the ‘white-supremacist-capitalist patriarchy’ (to borrow a bell hooks coin).

I should back up. this is the fugitive is sort of about Georg Büchner, who was a 19th century German dramatist and writer. In 1834, Büchner wrote the The Hessian Courier, a pamphlet against the ruling classes that called for “war on the palaces,” after which he was charged with treason and fled to France as a fugitive. In 1835, he wrote the Danton’s Death — a play about the French Revolution — and “Lenz,” an unfinished novella that’s often considered a precursor to European modernism. In 1836, he wrote a satirical comedy of errors, Leonce and Lena. In 1837, he wrote Woyzeck — a tragedy about a poor soldier who loses his mind and jealously kills his wife — which is one of the most performed German plays and has been adapted countless times. That same year, Büchner died from typhus at age twenty-three.

Broadly, this is the fugitive uses Büchner’s life and work as a model for intellectual and revolutionary engagement. Questions that float below this book’s surface:

Dick’s mode of pursuing these questions, though, is hardly that of a five-paragraph essay. The book has eleven sections marked off by slashes, with each section looking mostly like a series of tweets — line after line of un-capitalized, haphazardly punctuated text:

i like to look, not to sow, raise hopes

but tiller is also from twig or shoot

or how georg talked of hanging himself

Büchner is the tiller in this passage, with The Hessian Courier. The speaker, while on board with the cause, is not an agitator, and wonders whether “radical revolutionary passivity” may be viable. That question feels almost incidental here, though, for it is the wordplay with till and shoot that drive the passage’s movement.

While till initially possesses active and generative connotations, tiller’s etymological roots with a motionless twig lend the word passivity; however, shoot grows out of that meaning into its fatal verb-form. Because shoot destroys the self here, and slides into Büchner talking about “hanging himself,” the speaker imbues shoot (and so tiller, and so till) with an active passivity. Through a linguistic slipperiness, the speaker reconciles the initial friction between her and Büchner’s revolutionary impulses.

Punnery propels this book throughout, and four pages later, twig and shoot pop up again:

scrawny but always trying to be thinner

or a model for an interpretation or a sentence

The wordplay of twig, shoot, and model associates how intellectual thought privileges elegance (i.e., brevity, thinness) with how fashion and society privileges hyper-thin women. Additionally, because these words echo their first appearance in the book, “a shoot of a girl” suggests not just a photoshoot, but gun violence, an immature part of plant, and passivity. This echo adds nuance to my understanding of the text, but also defers any conclusive understanding. The path to comprehending this book is not a thorny labyrinth that eventually leads to one, glowing minotaur of “Eureka!” It is not a path at all: I plod over something like Monet’s water lilies, and each step sinks the hazy lilies into the pond. I am left with almost-impressions.

There are so many other almost-impression gems. There is Heraclitus teaming up with Pussy Riot:

There are typos doing drugs:

versus a teen girl on speed

in the russian airport, edouard played the piano while it snowed outside

snow is crucial in the writing of robert, sometimes of georg

snow is crucial in my writing, as in snow is white is true and snow white from the other book when it was girlish, playful . . . .

neither the girl nor the philosophy is ever pure as snow

and a prison cell is not a den. as for an animal

or it is. but a lair, a hideout (a robber’s den), a place like a hideout or a center of secret activity (opium of the masses den, den of iniquity or of quitting), a cozy private little room like the mind in the skull, behind its walls

I love how the Snowden pun casts a trampoline underneath the whole passage, on which the other references and ideas bounce, are independent for a moment, then bounce again. Snow bounces from precipitation outside a fantastical fugitive Edouard Wilhelm Eugen Reuss pianist, to a theme in Robert Walser’s work (who riffed off Snow White, who died in the snow), to a theme in Büchner’s work, to a theme in Dick’s work, to Snow White, to an emblem of purity — which “neither the girl nor the philosophy” can ever approach.

Dick’s use of snow reflects a larger tension between the discursive and the material. Snow refers to everything but actual snow in the real world. Dick refers to how other writers use snow, refers to a symbolic meaning of snow, and puns off Snowden’s name. Puns emphasize language’s own material by using the sounds and letters of words to suggest meanings. And because the whole book is dominated by this use of language, every word’s meaning most forcefully attends to its own situation in the book, rather than what the word might typically refer to in the physical world. In this regard, this is the fugitive is deliberately irresponsible with language’s duty to the real.

Often, this indulgence in the slipperiness of signifiers reeks of literary masturbation, but in this is the fugitive, bodily death, violence, or trauma are never far from Dick’s linguistic maneuvers. On one level, the book is littered with grim wordplay: “a shoot of a girl,” “meaningitus,” death from “typos,” or “trayver martyr, who was followed, provoked and shot to the death because he was a black boy in a hoodie.” On another level, Dick’s contemporary references center state violence against its people, especially women, trans people, and people of color: the Egyptian Revolution of 2011, sex trafficking, Trayvon Martin, Chelsea Manning, Pussy Riot, and Malala Yousafzai, to name a few. On a broader level, Büchner’s life models an extreme material consequence to making and distributing language: that of a fugitive.

This tension between Dick’s insouciant and slippery language and the brutal material world reveals a negotiation of identity and its body. What does selfhood sound like when its voice is free and capacious but its body is oppressed and constrained? Not simply alienated or fragmented, the self here is dispersed. In the way Snowden oscillates below the surface of the above passage, this speaker’s self oscillates in a sort of sine wave between Büchner and Misha. What unifies the book is the voice — characterized by its torrent of punnery — which throws itself against Büchner and Misha to make identity. The voice gets its energy from two competing longings: 1) to revolt against this world’s oppression of the body and 2) to return itself to the body and its sensuality. In a remarkable passage toward the end of the book, in which Büchner’s own words alternate with Dick’s, this sine wave is beautifully suggested:

i had to cry

i have to cry

that was the crack in my being

that was when it broke

when the perpetual yearning and grasping, the fire was temporarily extinguished

then ever after, this terrible relentless alternation

how it’s a wave function, rushing stream of desire, bliss, then of anger, sorrow

The book’s relentless playfulness obscured these longings from me until its last section, which clarifies the book’s project throughout. Read it once for an almost-impression of bliss; read it twice for sorrow kissed with ecstasy.

The Soul of the Marionette – John Gray

The Wellesley Sleepwalker and Robert Walser