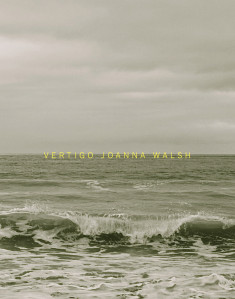 Resolutely grounded in the female sphere and gentle formal experimentation, the stories in Joanna Walsh’s Vertigo are precise conjurings that circle around domestic life, with the roles it throws upon us represented as part of a chore-continuum.

These sagacious short stories are shaped by a palpable love of language. Walsh’s voice is calm and poised; with incisive clarity she speaks unsettling truths, which are suddenly dropped on the calm surface of a paragraph, their ripples reconfiguring the story. For instance, the aptly titled first story, “Fin de Collection,” whose assertive opening “A friend told me to buy a red dress in Paris because I am leaving my husband,” posits the semiotics of dress as a rite of passage — a red dress being a passionate signifier for desire and new beginnings. At the start, the story suggests that retail therapy and an upbeat attitude might be what is needed, as if a dream that turned out bad could be so easily fixed. Sauntering around Le Bon Marché, the narrator muses on clothes and fashion and the incongruities of consumerism — Le Bon Marché has already introduced its autumn collection, though the summer’s heat is sweltering. But soon Walsh opens a tear in the smooth fabric of the narrative: the beauty of women strolling around, who may even be wearing cheaper clothes than her, becomes the target of intrasexual competition, as these beautiful female strangers become a painful reminder of the women the narrator’s unfaithful partner might have dallied with. It is a traumatised gaze telling the story. This story sets the tone for the kind of simmering tension that resurfaces throughout the book, as the subject pronoun suddenly changes to “you,” like it does in other stories, and a reproach disrupts the narrative substance. It also introduces failure, a thematic thread that runs through the collection. And as the narrator leaves the store empty-handed, no red dresses in Le Bon Marché — we’re told most Parisians wear grey — it also introduces self-control as another thread. Restraint is a triumph. Less is more. Though not always.

An enriching poetics of scarcity pervades the collection and is best embodied in “And After . . .,” a story about a provincial town where everything is a little bit drab and expectations for change are to remain so. Beyond the puns and playfulness that are a characteristic aspect of the collection, Vertigo’s pages deliver a seriousness of purpose. It trades in attributes that become almost their opposite. Thus, there is a quietness, that at times feels like a quiet relentlessness, a softness that happens to be assertive, a brittleness that may be a quality of resilience. The wavelike movement of consciousness is central to its pages. French words give the pieces a chic air, but with the exception of “Vagues,” (which means ‘waves’ in French) where a neurotic male character makes the luxurious prospect of eating oysters a drag, all the good pleasures of life, such as holidays, are on a budget, and middle-class precariousness recurs like a chorus. In some stories we are treated to the pleasures of thrift or become voyeurs to how other people economise. Along the line of less is more, the virtues of self-restraint are celebrated: not opening up to a friend, not causing a scene. In other stories, moderation and restrictions come back to take on other guises and meanings. In “Vertigo,” we are told the narrator has been taught “how not to want.” This is something that comes back in “Claustrophobia” and “Relativity” where the relationship daughter-mother is explored, and learnt “neatness” cannot be shaken, whilst emotions related to being a daughter, obedience and prescribed cautiousness, lead to a rebellious reflection full of self-determination and a longing for surreal excess: “I think we eat what we need. I could eat the whole earth if you broke it down into pieces, if the pieces were small enough. I read one woman ate the wall of her house: she didn’t know why. ‘My body calls for it,’ she said.”

A prolonged lament permeates most of the stories in Vertigo, as a double betrayal speaks its name. On the one hand, there’s the pain of having been turned into a docile body. On the other hand, the dents, damage, self-doubt and pervasive feelings of inadequacy and failure that a partner’s infidelities may leave in their wake. Resentment is an interesting animal. In “Summer Story,” the narrator muses: “Elegance is a function of failure. The elegant always know what it is to have failed. There is no need for elegance in success: success itself is enough. But elegance in failure is essential.” Rather than detachment, there’s clarity of thought. In one of the stories, the narrator muses: “How long does a thought take to form? Years sometimes. But how long to think it? And once thought it’s impossible to go back.” Consciousness hangs the dirty washing in the private space of mind. Thoughts cannot be unthought. But are resentment, disappointment and despair, dirty washing that should be tucked away? By making visible mortifying moments of being and how the self happens in relationship to others, parts of the self can be understood, and shed or edited, if need be. If reading can be a way of understanding what it is to be human, as readers, we witness these psychic events, and are undoubtedly enriched. Beautiful, precise and insightful, Walsh’s autofictions muse on life’s imperfection while insisting on liberation through the defiant and naked voicing of the truth of the self pinned at a point in time. And, therein, lies their lingering allure.

Susana Medina is the author of Philosophical Toys (Dalkey Archive Press, 2015), offspring of which are the short films Buñuel’s Philosophical Toys and Leather-bound Stories (co-directed with Derek Ogbourne). Other books include Red Tales Cuentos rojos (bilingual edition, 2012, co-translated with Rosie Marteau, Araña editorial) and Souvenirs del Accidente (Germanía, 2004). She has been awarded the prestigious Max Aub Short Story International Prize, was featured in Best European Fiction 2014, Dalkey Archive Press and her thirty-page epic Poem 66,’translated by R. Marteau, was the runner-up in Good Morning Menagerie Translation Contest and will be published by the USA press in 2016.

Code of the West – Sahar Mustafah