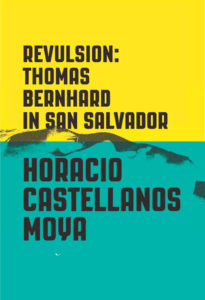 If Horacio Castellanos Moya wants the reader to know anything about his 1997 novel Revulsion: Thomas Bernhard in San Salvador, it’s that he’s sick of it. In an author’s note appended to Lee Klein’s English translation, he dismisses his “little imitation novel” as an “exercise in style” and says he “had fun writing” it, albeit with the “relish of the resentful getting even.” In an interview with the Quarterly Conversation, in which the interviewer acknowledges that Moya isn’t even a very great fan of Bernhard, Moya says that the book was a way to exorcise Bernhard’s “sticky style.” He seems intent on playing down the importance of this slim book, which is understandable. Moya has written, to date, ten other novels and a handful of books of short stories, yet he remains “uniquely and exclusively the author of Revulsion” in the minds of Salvadorans and, presumably, much of the Spanish-speaking literary world. Now he faces the possibility that his reputation may suffer a similar fate in the English-speaking world, and with good reason: the book is astonishingly good.

On paper, the idea of a mimicked Bernhard book seems entertaining, if a bit tiresome. Any reader of Bernhard will have felt the hypnotic pull of the prose style, the odd appeal of a recursive, fugue-like ride through an irate man’s mind. Yet even a cursory analysis of a Bernhard page will reveal how complicated his style ultimately is, how deceptively complex the steady accretion of concept and event becomes, and the near impossible way Bernhard will sustain that effect over an entire novel. To imagine an imitation is to think of all the ways an author could easily fail, or fall into parody, or become self-seriously catty. Moya avoids these pitfalls and offers up a rendition of Bernhard that retains the Austrian’s hallmark acid social commentary and bitter laughs, and yet is also so true to its source material that it manages to reveal as much about Bernhard’s style as it does about Salvadoran society.

As with any Bernhard book there are three points around which the story is spun: the narrator, the subject, and the object of the subject’s obsession. In Revulsion, the narrator is the author himself, Horacio Castellanos Moya, who is relating a conversation he had with his childhood friend Edgardo Vega, who has returned from self-imposed exile in Canada to El Salvador to attend his mother’s funeral. It is in fact less a conversation than a one-sided rant, of course, and the object of Vega’s fury is El Salvador and its people.

It is not just the beer, which literally causes Vega diarrhea — he claims to suffer from nervous colitis — but Salvadorans’ attitude towards it, too, born out of a lazy patriotism that is forever on the cusp of a lethal jingoism. They have the same attitude towards their food, and Vega’s brother brands him insufficiently patriotic after discovering that Vega detests pupusas:

Only hunger and congenital stupidity can explain why human beings here eat something as repugnant as pupusas with such relish, only hunger and ignorance explain why these people consider pupusas the national dish, Moya, listen to me closely, never let it occur to you to criticize pupusas, never let it occur to you to say they’re dealing with a repugnant and harmful food, they’ll kill you, Moya.

Murder is never far from Vega’s mind. Vega sees murderous intent everywhere: in the eyes of the youth who will eventually come to the bar to listen to rock music; in the reckless bus drivers, “guys who were no doubt torturers and participated in massacres during the civil war.” Vega has returned after 18 years abroad, during which time he managed to avoid the entirety of the country’s brutal civil war. This allows him to decry both the military and the communists, and lump the entire Salvadoran population into the category of assassins, as if the almost hundred thousand dead and disappeared were the outgrowth of some congenital ignorance and stupidity within the people, much like their taste in food. As evidence, Vega points to the universities, the newspapers, a post-war politics that lionizes a “psychopathic criminal” like Roberto D’Aubuisson, who ordered the assassination of thousands, including an archbishop. Vega points to everything that surrounds him, noting anything that bolsters his view of the country as spiritually and intellectually miserable.

Most interesting, above all, is that Vega points to his silent interlocutor, Horacio Castellanos Moya, too. Vega says of artists in the country:

the self-proclaimed artists and their works are nothing more than something of a pathetic farce: they believe in ideals, but their ignorance and mediocrity are such that they believe they are ideal artists. But they’re vulgar, mediocre simulators, Moya. It’s truly revolting, said Vega, this country where there are no artists, only simulators, where the only creators are half-assed imitators.

He then moves on to specifically deride their literature, and calls El Salvador an “illiterate culture,” one that “denies itself the written word, without any vocation of record or historical memory, without any perception of the past.” Curiously, he accuses Moya (with affection, Vega says) of writing “famished little stories about sex and violence” and encourages him to quit writing fiction because the country is incapable of producing writers of any worth, those can contribute something with “universal appeal.”

It is tempting to read the criticism of the novels of Moya (the narrator) and the reference to half-assed imitators as knowing nods from Moya (the author) to the reader; maybe when the book was originally published that’s exactly what they were, little winks to make sure that the author and the reader are on the same page, in on the same joke. But the initial reception of the novel, both from its detractors and those who praised it, makes it clear that these little winks were entirely ignored.

Much of what Vega says of his compatriots was confirmed by some of the more furious reactions to the book; enraged readers sent Moya death threats and a friend’s wife threw the book into the street out of respect for her beloved pupusas. Some of the fans of the book were even worse, as Moya often found himself asked to write similarly Bernhardian books to skewer the cultures of El Salvador’s neighboring countries, as if the whole point of Revulsion was to merely revile Salvadorans and their way of life.

But to view it that way is an error, one as grievous as thinking that Bernhard’s long list of works were solely concerned with his gripes about Austrian society, and an error that is made clear by how explicitly Moya states that the narrator is himself, which is the one main departure from Bernhardian style, where that connection is only ever made implicitly. The novel begins with this warning:

Warning: Edgardo Vega, the central character of this report, exists. He lives in Montreal under another name, an Anglo-Saxon name that’s not Thomas Bernhard. He surely relayed his opinions more emphatically and with more carnage than this text contains. I’ve softened perspectives that may have offended certain readers.

Combined with a little trick that comes at the end of the book, the reader should not only see that there is more to this book than a criticism of a country and a people, despite the fact that a reader might find it illegitimate — and worthy of death — or legitimate — and worthy of a Lonely Planet-type series of guides to the hypocrisies of places travelers should avoid. Rather, what Moya so deftly accomplishes is a shift of perspective; there are not, in fact, three points around which a Bernhardian book is wound, but four, and the reader has been there all along, invisible on the sidelines. Moya brings his readers to the center, dares them to reconcile the narrative rant before their eyes with the author’s cheeky assertion that this rant is the one approved for a more general, more delicate audience. What does the reader make of the book, then? What can one make of the main character, Edgardo Vega, the man who has positioned himself against the entirety of Salvadoran society?

Well, he’s a crank. Vega, far from embodying Moya’s views of society — a mistaken view that the novel’s supporters and detractors share alike — is the epitome of the insufferable expat who returns to the country of his birth. That expat needs, above all else, to be recognized as better than the people and the country he has left behind. This need is expressed in hyperbole and sweeping generalizations, the better to set the individual man against the entire society. Yet Vega is revealed by his own speech as a weak, vain and craven man, one who purports to diagnosis his country’s disease even as he prescribes nothing to cure it; one whose professed need to cut himself off from the country is undermined by his need to have someone from his country acknowledge the validity of his complaints. To miss the distinction between Moya the author and Vega the crank is to fail to see how no one is let off the hook in the end.

Which goes to show, whatever you think of Bernhard, or, in the end, Moya, what this book shows is that polemic, no matter how accurate or precise, does not necessarily result in a great work of literature. Those who called for Moya’s head were equally guilty of the kind of illiteracy Vega decries as those who said, “Moya, please, do us! Do us, as well!” If Revulsion were solely a listing of grievances against Salvadorans and the country they’ve created, the book would indeed be a “famished little story” by a writer more “preoccupied with ideology than literature,” a book with no “universal value.” Yet it is not that at all, which speaks to Moya’s frustration that this book and its reputation seems to dog him still, for all the wrong reasons. What Moya has crafted is a mirror by which a country might see itself clearly, both in the crank and in what the crank has to declaim, an earnest assessment of a nation struggling in the aftermath of over a decade of relentless, suicidal violence. And the book — with its sophisticated conceptual play, its penetrating tribute to the Bernhard’s style, and its acid humor — also provides more evidence, if more evidence was needed, of why William H. Gass said long ago that Latin American authors are the true inheritors of the novel tradition. Moya is as whip smart as any of them, and as pissed off; and the reader would do well to read carefully, lest they feel the lash of his well-earned condescension.