You May See A Stranger – Paula Whyman 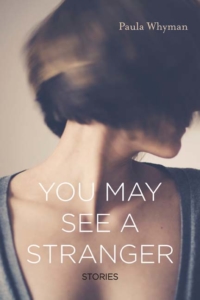 Recently, I’ve been given access to my parents’ Amazon Prime account, of which I’ve taken full advantage by watching episodes of Sex and the City while doing yoga. What strikes me most is that Carrie Bradshaw is utterly a child, acting the way I did at 15 when in her mid 30s. She sleeps with Big when he’s married to Natasha, and when their affair is discovered, she runs to Natasha for absolution because it would make her feel better if she felt some semblance of forgiveness. In the words of Joan Didion, Carrie lacks self-respect:

Like Jordan Baker, people with self-respect have the courage of their mistakes. They know the price of things. If they choose to commit adultery, they do not then go running, in an access of bad conscience, to receive absolution from the wronged parties; nor do they complain unduly of the unfairness, the undeserved embarrassment, of being named co-respondent.

It’s not the endless array of men, or the brightly colored drinks, or even the prioritizing of $500 shoes over rent that irk me the most, it’s the abject refusal to take responsibility for anything. I was in Carrie’s shoes when I was 18 years old, and my worst sin was I didn’t apologize for anything I had done because I didn’t really see the purpose. Would it fix what had transpired? Would I be pardoned by the higher powers because I was supposedly repentant? While I was reading You May See A Stranger by Paula Whyman, I kept thinking about Carrie Bradshaw and my adventures in accidental homewrecking, and how Whyman’s protagonist Miranda Weber is, on paper, an utter mess in a way even Carrie would never let herself be, but there’s an aura of deep sadness and careful contemplation in her sprees of masochistic self-destruction.

The most enduring aspect of Miranda’s life is a continual series of badly behaved men. It’s not that Miranda has particularly bad taste in men, but rather that she seems to somehow bring out the worst in already flawed characters, which ends up making her all the more unhappy. From her high school boyfriend (and the equally transparent figure she cheats on him with) to her eventual husband and numerous lovers in between, the men in Miranda’s life always fall short of her expectations, and she struggles to be happy because the abject fact is that they don’t warrant any such sentiment.

Pogo in particular is a memorable disappointment; the father of the unborn child she eventually aborts, he’s an older man who regards Miranda as currency, a decent investment for her attractiveness or rather, her ability to come across as attractive. He’s an overgrown manchild, but is rather more sinister a figure than most incarnations of the term. Miranda observes, “He always knows what to say to get what he wants. He never tells me I’m pretty anymore. He says I already know it. He only wants to hear that he is.” Miranda aborts Pogo’s child as a young woman, and she thinks about it for the rest of her life, that child she gave up with only a large stuffed bear as compensation from its father, and she comes to the realization that all actions have consequences even when they’re apparently unseen.

Miranda’s relationship with her husband Devin is also sticky at best and foreseeable agony at worst. From the beginning, it seems as if Miranda’s marriage is a playacting at being normal, a way to metaphorically escape the tumult of her 20s and the exhaustion of her childhood. While Miranda’s other relationships are active decisions she makes, her relationship with Devin seems to be a reaction to it all, an intended safe haven from the overarching chaos. “I need to think of him as invulnerable,” Miranda says, because despite her bravado, she is extremely wary of what life can bring and for that matter, has already brought upon her. She loves him, but unfortunately, when it comes down to it, adult love is more complicated than simple fidelity.

In a collection full of stories about men that she fucks, that she’s fucked by and that she is fucked over by, the most heartrending part of Miranda’s story is her relationship with her sister, Donna. Miranda early in her life thinks, “It seemed more appealing to imagine myself as Jane Eyre, with no family at all.” Donna is severely mentally disabled, and it falls upon Miranda to take care of her, which she doesn’t openly resent but still harbors a deep frustration towards. On some reflection, I suggest that women generally relate to one of two gothic heroines, Jane Eyre or Cathy Earnshaw from Wuthering Heights. Personally, I’m a Cathy and I’ve been allowed to grow into the role: I’ve declared my love for somebody in the pouring rain, I’m impetuous at best, and entitled in a way that comes from being the much adored only child of two parents who didn’t know better than to spoil me. But Miranda is a Cathy trapped in the role of Jane. Her secret is that she is not nearly as compassionate or empathetic as she pretends to be but lascivious and manipulative, even cruel in her thoughts. The truth about Miranda is that she’s terrified in the most profound way. “Fear is dominant,” she claims, and the worst thing is she doesn’t even know what she’s afraid of.

Later in the collection, what is possibly Miranda’s biggest fear and her most secret desire comes to fruition: Donna kills herself. Miranda is almost numb about the whole event, and contemplates the other people she knew who had committed suicide, unilaterally focusing on her grandmother’s husband who shows her his penis in order to distract herself from thinking about her sister. On Donna’s death, Miranda is alone, even while surrounded by her husband and her parents, because she has lost her most long cherished partner. As she says, “Can I perform a pas de deux alone? I can leap; I can catch myself. Here I am, my sister and me, I’m both now, and neither.” She has lost a significant portion of her identity; she has lost a part of herself that she’s never going to get back no matter the peons of self-destruction that ensue, including the affair with the now even more rotund Pogo.

In short, You May See A Stranger is a book about humanity at its best and its very worst, but mostly somewhere in between:

The individual events in Miranda’s life are at times shocking, lurid and ludicrous and emotionally wrenching all at once, but their sum total is more than their explicit characteristics, driven by the sort of profundity I’ve grown to associate with human beings attempting to go through the motions of life without their hearts really being in it. Miranda is haunted by her past, by her sister’s death, by her abortion, by the many men who treated her with a callousness bordering on assault. I don’t condemn her for her preoccupations, but that tone makes narration unreliable, as if the reader is not precisely sure if Miranda ought to be trusted. The ending of the collection is ambiguous, gesturing back to the beginning of Miranda and Pogo’s affair, back when she was halfway innocent and still marginally hopeful.

This collection of short stories is thought-provoking in a truly adult manner most literary works are not: provocative but pensive, hilarious but heartbreaking. It’s not a cohesive novel but it tells a story all the same and even has a thesis. You May See A Stranger suggests that life is all a circle: we have affairs at 45 with the men we thought we were rid of at 23, we become more like the parents we swore never to emulate, and nobody is left alive to chastise us for our mistakes.

Dhaaruni Sreenivas is a student at Cornell University. She can be followed on Twitter @Dhaaruni or at her personal blog at dhaarunispeaks.tumblr.com.