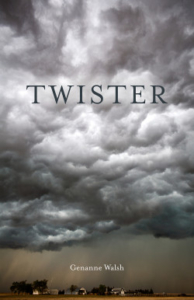 There are certain books you can’t really talk about without breaking down the structure, and Genanne Walsh’s debut novel Twister falls into this category. Part of the pleasure with novels that use a distinct structure — or, for some, the pain — involves grasping the specific rules and seeing how they cleave and construct the identities and relationships of the characters while inciting a distinct form of drama that, ideally, could only follow from the structural choices made. Walsh uses a careful, restrained, yet strong hand to sculpt Twister’s shape. The expansiveness of time and the full cast of characters might, in a general sense, make some think of Jennifer Egan’s A Visit from the Goon Squad, one of the few recent examples of someone successfully reconciling what might appear to be two exclusive projects: she experiments with time and space and form while following more traditional character arcs, something which Walsh also aims to do.

A twister spins counter-clockwise in the northern hemisphere, a feature embodied in Twister’s structure. The first part of the book replays the day of the tornado as characters in a small, present-day town prepare for the dangerous storm. Rose — mother of Lance, the soldier in an unnamed war for whom the town mourns — has isolated herself since the death of her son a few months earlier, but she leaves her land for the first time to deliver a note to her now hated step-sister, Stella. Walsh then turns the clock far back to the past in the second part when the twister hits, spinning through the youth of Rose and Stella and continuing up to Lance’s death. When we return to the present time of the novel in the third and final part of the book, we have a detailed understanding of the characters’ lives and wait to see the result of Rose and Stella’s union after the storm. Walsh uses the twister as both a propelling incident in the plot and a pattern for how the book will progress, making the structural choice feel necessary, as the form and the content merge to create an immanent sense of disaster, where detailing the past incites tension for the future.

Where the structural choices prove less successful, though, is in the creation of drama. The book seems to make a promise: we’ve replayed the same day, relived the past, built tension throughout, and now, back in the present, here’s what the consequences will be. This is somewhat transactional: a significant amount of time has been spent with what each character brings to the table, and now, at the table, we want them to deliver the goods. And yet, near the end of the book comes this denouement: “Creation gives way to dissolution, clearing the way for more life. More gardens and hopes and failures, more cold fronts and squalls — more war. Which is to say, with as much rhyme and reason as it began, it ends.” The novel proceeds to speed through in the present tense what feels much more like an epilogue than the third part of the book, as we learn what several characters are currently up to and what will happen to others. The result is a somewhat unsatisfying asymmetry at the book’s end.

To be fair, if the book seemed only interested in a structural ploy interspersed with fun language, I would not be disappointed, because I never expected more. But the space given to developing the characters, providing a near exhaustive history of Stella and Rose, suggests Twister wants to be more than just an experiment in representing time and space. I needed to see how Stella and Rose would make amends after the storm. Instead, we cut to the future, where they have survived and reunited at the Bluebird Café, their former workplace. We are asked to infer the significance of their communion without witnessing how this comes about. This is in part a result of overemphasizing the drama of the impending tornado, when, really, that’s a dead end: a tornado shows up and then disappears. The consequences of the tornado, however, last for much longer. Without a more extensive interrogation of what comes after, the tornado feels much too metaphorical, an event that acts as its own argument rather than a challenging premise to a much larger point.

Twister maintains a particular mode of realism, focusing on loss and betrayal among family and neighbors. But scattered between the sections that each take a specific character as the subject, Walsh inserts short, energetic riffs that read as part prose poem, part instructional manual, part town gossip, part dictionary. The book begins on this note. Before we meet Rose, we first meet the storm:

Sweeping over the Arctic Archipelago, puckering nipples and chapping faces across Nunavut: in Grise Fiord, Resolute, Gjoa Haven; crossing into Manitoba, freezing the top layers of Island Lake . . . Blowing across the southwest, arid and punishing — imagine dustbowls, cow skulls, locusts, parched earth — rolling off the Rockies faster as it flows east. Sisters clash and mingle in the wide open skies of the continent’s midpoint . . . North, south, east, west, we’ll put these people to the test . . . Hover at the midpoint. Turn the radio dial; hear snatches of the lives below. Listen.

The section continues at this ripping pace until it offers a detail about a single character’s space — in this section: “Rose’s overgrown reluctant acres” — which then prompts us to expect that character’s perspective in the following section. The prose here is powerfully frenetic. The proper nouns give a sense of direction and purpose, and the gerunds yank us from one sentence to the next. These sections repeat throughout part one of the novel, carrying their own bit of narrative within them as we get closer and closer to the tornado hitting Rose’s land.

One riff focuses on etymology; another reminds us not to forget that animals, too, will be affected by the storm. Still another describes the chaos at a radio station: “Emails, text messages, faxes, phone calls; printers spit out paper with bold captions. An intern hands a radioman a piece of paper and points to a message . . . A secretary picks up the phone to call her boss in the mayor’s office . . . Another staffer in another office runs down the hall to make sure the safety officer, who has been having troubles at home, is at his desk.” These seemingly random shreds of information end up providing a shapeliness and order to the novel’s progression, and also offer a solid kick to the book’s movement, generating a sense of urgency as we await the twister’s arrival. The omniscience here is at times unwieldy: in these sections, the rules of the book are pushed as far as they might go and begin to break down a bit. The structural representation of a twister means that we can enjoy the riffs without feeling distracted about their appearance.

Walsh is incredibly intelligent, fierce, and, at times, tender with her prose. What excites me most about Twister is its ambition. If I had to toss out a necessary condition for what makes worthwhile fiction “worthwhile” — I don’t have to do this, but I will anyway — it would be ambition. Ambition doesn’t necessarily mean designing an innovative structure for your book, but it can, and here it does. Besides being fun to read, it is satisfying to see Walsh take full advantage of the book’s subject to experiment aesthetically. As much as the controlled structure does, the messiness and the chaos make Twister an outstanding debut, in which the storm itself is one more character driving events toward an uncontrollable future.