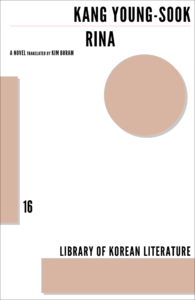 Kang Young-Sook’s Rina, translated from Korean into English by Kim Boram, is part of Dalkey Archive’s Library of Korean Literature series in conjunction with the Literature Translation Institute of Korea. The series features an impressive list of contemporary Korean writing “from the late modern period through to the modern day,” as Dalkey’s website states. Kang, a South Korean writer who has published short story collections that have yet to be translated into English, puts her main character Rina through unrelenting hardships. It is interesting to note that the first of Kang’s books to be translated into English is a novel that, in the midst of current media focus on refugees, is one that closely tracks the movements of one. Starting from the very first sentence, “The soldiers slowly approached the twenty-two escapees, guns leveled,” the reader is immediately situated within a world where in order for anything remotely good to happen, there needs to be presence of wealth and useful connections to the well-connected. In tracking Rina’s life as an escapee from a country that is meant to be understood as North Korea (the clue is not found in text but possibly in the author’s nationality) the novel is committed to tracing the logic of capital.

“Cheapest is the best whether it’s for products or labor,” Rina is informed and it is the truth of that logic the novel tries to approach, or excavate. From the start of her journey until the end, Rina does things she doesn’t want to — submits to sex with her factory supervisor, kills people, sells sex for money, and continuously pretends. In one of her first jobs, taking over the role of a local aging singer, she spins lies about her situation to an audience of equally trapped, impoverished workers. She becomes a Scheherazade of the borders. “She knew that lying was necessary for a more exciting and fun life”: as an escapee dealing with the security state and border control, it’s also a matter of survival. Rina is then not the most reliable of narrators, experiencing extreme disorientation and displacement. In this way, the narrative emulates the arbitrary workings of borders and globalization, tracking a life that is meant to be a series of jobs that keep one going until death, after which only one’s debts have the certainty of living on.

In this way, Rina also traces the mechanisms of transnational labor and shows how the operations of capitalism are also arbitrary except in its singular logic of profit over anything else. Kang refuses to moralize on the nature of the various people who screw Rina over, be it “Producer Kim” who manages her brief career as a tent singer and buys and sells many other young women to become “entertainers,” or “Missionary Jang,” who together with the producer help to move these women to a village situated by a train station in order to become full-time prostitutes to service male workers coming into the village from all surrounding areas. The producer and the missionary are not individualized as bad or evil owing to some past event, bearing psychological scars. Instead, they are shown to merely operate along the lines of capitalist logic: cheap is best especially for labor, and what can be sold, must. They both refuse to enter into barter agreements for their efforts on behalf of the escapees and refugees and accept nothing in return but cash. Their “efforts” allow the escapees to circulate through the global market more efficiently, while disguising it under the cloak of mobility and progress within the often-repeated lie that this is the best/fastest/easiest way to get to the border of the promised land of “country P.”

Rina is not a novel that is concerned about the interiority of the protagonist in any sense of the bourgeois realist or modernist novel. Instead, Kang is interested in showing how a particular subjectivity is formed in relation to its external factors, a relation that depends entirely on one’s class — that is, one’s relation to the means of production. It is a world mediated by images — these people labor to make things that are then circulated as commodities that reinforce the primacy of the image — but in the world of the subaltern workers, the body is unavoidable. The labor classes are forced into close encounters with one another’s bodies. They have to see each other in all manner of being that bourgeois mores deem private, or ideally only shared between consenting adults, be it showering, peeing, giving birth, or fucking.

Rina is aware of how her body is put to use, either as an object of gratification for other men or as a source of labor for capitalists. Sometimes both of these ends to which her body is put to use merge, particularly through the sexual division of labor through work like prostitution. Despite this awareness, she has a hard time coming to grips. Whenever she sees her reflection in the mirror, she is either ashamed or surprised. Her physical appearance doesn’t fit with her idea of herself. In a world where the logic of private property prevails, Rina as a novel attempts to grapple with people who literally own nothing, women who can’t lean in and “own” their sexuality or their experience despite feminism’s best hashtags. But Kang recognizes that being oppressed by the logic of capital doesn’t mean that workers lack agency, wit, or kindness and are mere ciphers who robotically do what’s required. It’s just that faced with the vast machinery of capitalism’s profit-motive, individual acts of resistance or agency are not enough.

Maybe because the borders of the subaltern body are made porous while those of nations remain unbreachable, this is a novel that is especially attentive to landscape and its shaping of subjectivity. Distortion of psychic states are greatly influenced by the physical surroundings and the weather and where the people, who have been traded and exchanged and taken to and fro until they lose all sense of time and place, find themselves. As such, Kang refuses to name any of the places through which Rina travels, only leaving clues that sends one off to Google to verify a hunch and to attempt to identify places via labor exploitation cases or tragedies that made the news. In the beginning of the novel the escapees endure a fifty-hour train ride and “the country seemed to spread itself out viciously, so that no matter how far southwest they traveled, there was no end to it.” By the end of the book, when a blizzard blankets the wasted and hazardous industrial complex where she used to work under layers of snow, Rina notes that “the world became lighter and brighter and the people became more insane.” The discrepancy between an aesthetically-pleasing image of nature and the mental condition of the inhabitants of this toxic place — all former workers — is an effective technique that intentionally jolts the reader. What might be taken for granted as comfortable or soothing or beautiful in a novel that subscribes to bourgeois realism becomes intentionally alienating or disconcerting and potentially hostile in a novel about the subaltern.

Towards the end of the book, Rina finds herself yet again contemplating the vast “blue levee” of yet another border as it spreads out in front of her. She has lost almost of the people she has thus far travelled with. Much earlier in the book she had one chance to return to her own family, to find some form of safety or comfort in the arrangements of a heteropatriarchal family unit, but refused this potentially happy, or at the very least comfortable, ending. Rina, like the well-off people with a room of their own and the means to maintain it, wants something better than what is on offer. She wants a life that has not been parceled out to her. She knows what her place is, and that of millions like her who toil with no rewards. But she refuses it. And so she finds herself alone. She sees the border, and once again, she runs towards it.

Love in the Korean Demilitarized Zone