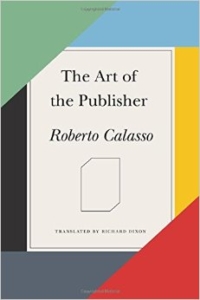 In an essay published in The New York Times Magazine in 2006 (“Scan This Book!”), Kevin Kelly celebrates Google’s efforts to create digital copies of every book in the world. Ultimately, Kelly believes, these efforts will lead to a universal library in which “each word in each book is cross-linked, clustered, cited, extracted, indexed, analyzed, annotated, remixed, reassembled and woven deeper into the culture than ever before.” Thanks to the power of search engines and hyperlinks, we will no longer be confined to the static and detached realm of print. All texts will be entwined into a single comprehensive text, one book for all the world’s knowledge. In short, Kelly is describing a vast extension of Wikipedia. Every scrap of information will be interconnected and easily accessible. Existence itself will be defined by a modern version of Descartes’s famous dictum: I link, therefore I am.

Two essential things are absent from Kelly’s exuberant manifesto: an appreciation of literature and an understanding of why people read. His ideas are limited to a technological perspective, causing him to think of books merely as containers of text, “durable backup technology” whose cultural authority has expired. He repeatedly describes them as “isolated,” as if their self-sufficiency is a shameful shortcoming—as if a book’s value should be determined not by the words on its pages, but by how widely and readily these words can be shared. “When books are digitized,” he concludes, “reading becomes a community activity.” He does not acknowledge the fact that many people enjoy reading because it is not a community activity, and that to these people, reading a single good book from start to finish—slowly, carefully, and by oneself—is far more rewarding than sharing the snippets of a thousand different books with a thousand different friends.

A forceful and eloquent response to Kelly’s article can be found in the pages of Roberto Calasso’s latest book, The Art of the Publisher. Calasso recognizes that the dream of a universal digital library, as articulated by Kelly, is not so worrisome because of its specific threat to printed books, but because of its broader threat to an entire way of knowledge — a way of knowledge that accepts a relationship with the unknown. “What has been described,” Calasso writes, “is perhaps the most advanced form of persecution: life besieged by a life in which nothing is lost and everything is condemned to exist, available always, suffocating.” There will be no place for discernment in this future, no time for entertaining the idea that some things are worth sharing while others are not, no need for publishers to decide that certain texts are better than others.

As a longtime publisher at Adelphi Edizioni in Milan, Calasso is especially troubled by these prospects, and in his response to Kelly’s essay he puts forth a compelling argument against them. But The Art of the Publisher is much more than a response to Kelly’s essay. It is a celebration and defense of a tradition of publishing that began with Aldus Manutius in the 15th century. “To understand what a great publishing house can be,” Calasso writes, “all you have to do is look at the books printed by Aldus Manutius.” Two books in particular: Hypnerotomachia Poliphili, which many people consider the most beautiful book ever made, and Sophocles, the first paperback. These books are significant in themselves, but to Calasso they are even more significant for what they represent: publishing as a form.

To practice the art of publishing, he believes, one must have “the capacity to give form to a plurality of books as though they were the chapters of a single book.” This “single book” is not the same as the one imagined by Kelly, in which the parts are dissolved into a boundless whole, but rather an eclectic unity in which each part remains unique and intact while playing an integral role in the composition of something larger. As an example of this way of publishing, Calasso cites Adelphi’s Biblioteca series, in which there are now more than six hundred titles. A small sample of the authors whose books are included in this series shows how enticingly diverse it is: Friedrich Nietzsche, Sylvia Plath, Ludwig Wittgenstein, W. B. Yeats, Simone Weil, Czeslaw Milosz, Djuna Barnes, Franz Kafka, Colette, Fernando Pessoa, Georges Simenon, Elizabeth Bishop, Vladimir Nabokov, Mervyn Peake, Jorge Luis Borges, and Jules Renard.

Calasso likens the Biblioteca series to “a vast and varied mental landscape” in which it is easy for readers to get lost. But readers will also recognize similarities in the features of this landscape, for each of the books that form it is what Calasso calls a singular book. “In short,” he writes, “a singular book is one in which it is clear that something has happened to the author and has been put into writing.” He devotes an entire section of the book to clarifying and elaborating this definition, providing plenty of examples of singular books along the way (including The Other Side by Alfred Kubin, Jakob von Gunten by Robert Walser, The Manuscript Found in Saragossa by Jan Potocki, and Father and Son by Edmund Gosse). We learn, then, what he considers to be the art of the publisher: to give form to various singular books.

According to Calasso, this art was practiced in the 20th century by publishers such as Kurt Wolff, Giulio Einaudi, Peter Suhrkamp, Roger Straus, and Vladimir Dimitrijević. Through their work, they continued the tradition of publishing that began with Manutius more than five hundred years ago. But the values these men exemplified may be losing their cultural relevance. As Calasso explains it, the figure of the publisher is fading, giving way to managers who run publishing houses exactly as they would run any other kind of business — that is, with exclusive regard for the bottom line. This misplaced business model, combined with the public’s “infatuation with information technology,” leads him to conclude that the publisher is becoming an obstacle, “an intermediary who could happily be dispensed with.”

The Art of the Publisher is composed of various pieces, many of which were written more than ten years ago. Some of the criticisms Calasso makes of the publishing industry are linked to particular trends that occurred at particular times, and as a consequence, their usefulness seems to have expired. His pronouncements of decline are still relevant, but they do not pertain to the publishing industry as a whole. While they apply to the larger conglomerates, they fail to account for the proliferation of small presses — many of which are nonprofit organizations — and the remarkable contributions they have made to international literature. By excluding small presses from this book, he depicts contemporary publishing in a way that is misleading and incomplete. If he were to examine the catalogs of some of these presses — Open Letter, Deep Vellum, or Peirene Press, to name a few of my favorites — I think he would find that the present state of the publishing industry is not quite as bad as he fears. Perhaps he would see that his beloved tradition of publishing endures in the work of these presses, that the art of the publisher is not dying, it is adapting in order to survive.

Publishing, as Calasso knows, has always been an impractical venture, and those who have chosen to undertake it have rarely been free from financial or cultural difficulties. The problems of modern publishing may seem especially dire to him, but he does not think that it has become a lost cause. Despite his dreary diagnoses, he maintains his faith in a discerning readership: “There is still a scattered tribe of people in search of something that may be called literature without qualification, of something that is thought, that investigates (here again without qualifications), that is gold and not tin, that doesn’t have the flimsiness typical of recent years.” To this scattered tribe he offers The Art of the Publisher, a short but significant collection of writings that stands in proud resistance to the currents of decline in literary standards. Some of its pieces overlap in ways that lead to awkward repetitions, but these are minor flaws, and as a whole the book can still be enjoyed as a single narrative. It is filled with the knowledge and wisdom of a life devoted to literature, and it serves as an urgent reminder that the role of the publisher is essential to the perpetuation of culture.

A. M. Kaempf is a bookseller and a contributing editor at The Northwest Review of Books. His work has appeared in The Threepenny Review and The Millions.