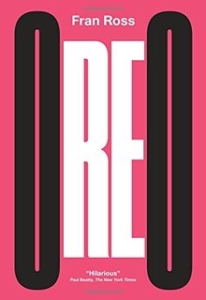 Fran Ross’s 1974 novel Oreo, rereleased this year thanks to New Directions, is really damn funny if you get the jokes. They only come fast and smart, and Ross will sometimes generously explain them to her readers, like in this scene where the eponymous heroine teases her English tutor:

Oreo overheard him mumbling happily to himself about the many joyous conflations he and his new [girl]friend had had together. That one was easy for Oreo to figure out. “Conflation, from conflare, ‘to blow together,’” she said to herself. ‘Oh, shit. The professor’s just talking about plain old sixty-nine.”

It’s nice to see the humor pulled out of the book; you can somehow grow inured to it when hit with these wisecracks every other sentence.

A comical reworking of the myth of Theseus, Oreo is a story told in fragments and formal experiments. In brief, comic episodes, scenes, and, sometimes, restaurant menus and math tests, Ross cracks jokes and builds an image of her lead, the young black Jewish woman Christine Clark AKA Oreo, as she sojourns to discover the “secret of her birth.” Through a ludicrous romp of sleuthing, Oreo follows a series of ridiculous clues left by her father on a coffee stained list in an attempt to find him and, by extension, the secret. Armed with her Thesean sword and sandals, a mezuzah on a chain (containing a New Testament passage no less!) and a pair of socks to keep warm, Oreo’s journey takes her all over Manhattan — stinky cheese shops in the Village to a Harlem brothel — concluding the novel with a mythic suicide and some role play at a sperm bank.

Ross’s approach to humor is as much distinct as it is distinctive of the time, at least to the new crop of readers whose image of American humor in the mid-1970s is most likely what they received in their parents’ nostalgic sharings of the male-dominated, often Jewish vaudevillian, comedy canon: Mel Brooks’s Blazing Saddles and Young Frankenstein (both 1974); Woody Allen’s Bananas (1971) and Sleeper (1973); and the comedy albums of Richard Pryor, George Carlin, Cheech & Chong, and National Lampoon. The novel’s jokes range from crude play with etymology, as seen in the above crack, to the playful turns of mocking absurdity that made Groucho Marx famous: upon meeting his daughter for the first time, Oreo’s father happily notes “You have my eyes,” and Oreo’s response? “I was going to say the same thing to you.” Ross leaves it to the reader to imagine Oreo tapping her cane (which, yes, she is carrying around Manhattan) after this line. In this comic tradition, the humor works as a kind of identitarian smokescreen, as if to say, “Who am I? Someone cleverer than you, and that’s all you need to know.”

The crude and obvious contemporary connection this reviewer would draw to Ross’s work would be Ishmael Reed’s outlandish and sharp satirical novels, such as Mumbo Jumbo (1972) and Flight to Canada (1976). Yet there seems to be something altogether different in Ross’s project. To speak generally, that is, reductively, Reed examines culture on the macro-level as a network of mythologies, identities (racial, gendered, national, and so on), and telecommunication waves. Ross examines culture on the micro-level of individuals acting in the world, making themselves, and, most importantly, having fun with the structural orders that make culture and identity — most especially language. One of the more important and fascinating differences this makes on Ross’s novel is the relationship she builds between her reader(s) and the work, the characters, and herself as the writer.

At the introduction of the novel’s biracial heroine, Ross positions the reader: “A secret cauled Christine’s birth. This is her story — let her discover it.” A cute pun followed by terse, if chuckled, warning to back off. Readers can take this tone as a microcosm for the whole of Oreo — a tale of a black American Jewish woman, who mixed ethnic and racial identities match America’s favorites for (comedic) entertainment. And here I am, a white American goy, being told that Christine’s story is a secret not for me to know before she figures it out.

Ross’s novel offers readers an unending stream of snort-worthy punchlines with implicit boundaries for who can access this story and how they can. Oreo is Christine’s story, and it is for her (read: Fran Ross) and nobody else. Black and Jewish readers probably have more to gain from such a story than readers like me: more aesthetic satisfaction, more bite to the humor, less time spent looking up Yiddish words. But the most significance seems to come from Ross’s claim of her protagonist’s independence from those enjoying the representation of her life. We can watch and laugh if we want to — but never forget that Ross’s life is not for us.

Ross plays with the desires to make certain peoples and their bodies legible according to cultural standards, similar to the way Oreo messes with a perverted caller posing as a medical doctor asking about her age, underwear choices, and virginity. When he asks the fourteen-year-old Christine to tell him “all the words [she] know[s] that mean sexual intercourse,” she casts a “wicked smile” and says, “Certainly. Procreation, cohabitation, coition, coitus.” Knowing she’s mockingly tapped into wrong vocabulary and frustrated him, she then tells the pervert what he wants to hear: “a lot of words that begin with p and c and t and x, that rhyme with bunt and pooky and noontang.” Manipulating and controlling this heavy-breathing perv with her knowledge of language, expectations, and patriarchy, Oreo convinces the caller, salivating with lust, to come to her house, only to greet him with her own specially-developed mixed-martial art: “Way of the Interstitial Thrust.”

Oreo knows how to make herself into whatever she wants to be by playing with the ways those around her perceive her; except that the joke is on them, the kick to the groin is for them, and the laughs are for her. Even the reader, who certainly gets their laughs, is not wholly allowed into her world. When the horny doctor asks for Oreo’s address, Ross doesn’t give her reader a street and house number in the dialogue, instead merely writing: “She gave him her address.” Ross reminds the reader that they are not in charge of this phone call, Christine’s Thesean journey, the language and pop-culture-referential play, or the novel itself. We readers should just be happy to be here.

Am I disingenuously reading a particular politics into Oreo? Totally possible. Ross probably mostly wanted to write a funny novel and make some cash. Such a theory would be supported by Haryette Mullen’s excellent new forward to the novel: struggling to make it as a comedy writer, Ross tries her hand at this ridiculous pile of ink and tree pulp so many people seem to be paying money for. It’s a good way to make a buck when you’ve got a quick wit, and “yucks for bucks” doesn’t necessarily mean political resistance or revolution. But, even so, mythology is more than just Ross’s narrative inspiration for this novel; isn’t mythology in a Barthesian sense the basis of great comedy? Our most revered comedians often play with what we think we know, otherwise known as lies we tell as if they’re truths (such as, stereotypes of black and Jewish women), to discover the sometimes joyful surprise that we were mistaken or that our myths are more fiction than axiom. This play with mythology is often as tragic as it is comedic, but it seems fair to assume that there’s always a political relevance.

Full of jokes on and with the bourgeoisie — clearly the demographic of cultural capital holding gut-busters Ross is writing for — the novel can so easily pull such a reader into the humor. Pages fly by with quips from precocious and insistently impatient characters, and, at the end, this reader can’t help but feel he just sat down and, following the suggestion of junk food in the novel’s title, gave the business to a bag of barbeque-flavored potato chips: staring into the middle distance, chuckling through the gum-cutting soggy debris of fried potato slices, reaching to the bottom of the empty wrinkled reflection-less mirror bag only to come up with my own fingers covered in delicious brown and orange flavor dust.

I am the readerly Janus head of stuffed and starved, pleased and disgusted. Ross certainly came, but how about you, reader? I don’t think Ross, Christine/Oreo, Helen, or any of the women in the novel particularly care about how the reader feels. Oreo is for its readers’ consumption, their over-satisfied stomach aches and plastic sleeves with only the sooty remains of cream-filled chocolate cookie sandwiches are their own business. I picked up Ross’s book, Oreo learned the secret of her birth, and I laughed my ass off, anyway.