Iowa, The Middle of Nothingness 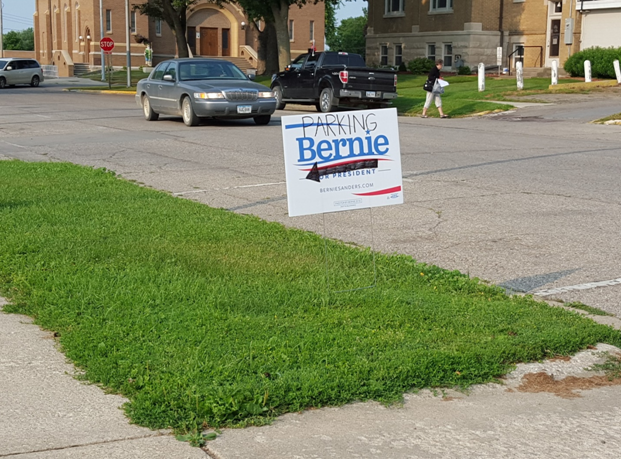 In a few months, media will pour into Iowa; Hillary Clinton will have bought a house in Des Moines; campaign speeches will be given on front porches, in small gyms, around the campground of the state fair; and the Iowa primaries — technically caucuses — will determine, to an outsized degree, who will be the candidates for the next presidential election. Iowa votes first, but I’ve never quite understood why. Is there a reason? Occasionally someone tries to explain it to me. Is it because Iowa is an important slice of America? Or: is it that it’s representative, or essentially American in its values, or unpredictable politically? I’m occasionally told these things not because they’re particularly true, but because this is what some people in Iowa have come to think of themselves. I even wonder if, among white people, the vague myth of Iowa as representative isn’t a national delusion.

The real reason is that one weekend in 1972 all the hotels in Des Moines were booked. Iowa was scheduled to vote after New Hampshire, but the hotels were booked, they couldn’t host the state convention that weekend, and so the state had to move forward the caucus and leapfrog New Hampshire. Then the state legislature codified the decision, enshrining in law that Iowa must always vote first. If another state decides it would rather go first, and schedules its primary before Iowa, then Iowa will simply reschedule and reclaim its position. When figuring these things out, it’s perhaps best to read Ezra Klein explainer articles, and not talk so much to your neighbors.

I’m spending the summer in Iowa, as I always seem to. I don’t live here anymore, but curiously I tend to in the summer. Every four years the presidential primary contenders join me. This summer the national media haven’t come yet, but Bernie’s here. Former Democratic Maryland governor Martin O’Malley is offering $12 an hour to canvass for his campaign, which seems a good marketing strategy; I had never heard of him until my unemployed friend began telling me of his various job prospects. Sometimes Hillary comes. I’m not sure about the Republicans, but I imagine they’re around; it certainly feels as if I could run into Scott Walker just by taking a wrong turn. Iowa in the summer is a pleasant place, if you have a generally ironic outlook. It’s remarkably empty, for one, and it’s almost showy in its unimportance, the way a bare stage looks in an impressive theater. But just at the moment you think you have a grip on things, on the state’s large-canvas, depopulated modesty, Bernie calls saying he wants to talk, and all notions of importance become confused.

On July 4th, 2006, Obama emerged from the front door of my neighbor’s house. Their house is blue, turn of the century, a little plantation-like, and that day it was dressed in American colors. Security guards lined the steps of the front porch. The Obama daughters jumped on a trampoline in the backyard. Perhaps 500 people had gathered, and I knew all of them. Friends of mine handled the administrative details. Obama stood in the shade of the porch with his sleeves rolled up and called for more troops in Afghanistan. He noticed that my small town’s mayor was in attendance (Darrell Dobernecker, Republican), badly mispronounced his name, and left, I imagine, without knowing the difference. Afterwards he became president. For a certain type of American, the caucus is one of few reminders of Iowa’s existence. Iowa votes first, it has a world-class CIA-funded Writing Program, and beyond that, depending on whether you think its cash crop is corn or potatoes, it’s indistinguishable from Idaho, or — this is if you know absolutely nothing of agriculture — Ohio.

There should be something dramatic and self-pitying about Iowa’s situation, and I’m always amazed that no one else in the state seems to feel this way. I read Polish writers on the ironic, unreal predicament of nations, or think of Auden’s “Musee des Beaux Arts” — in which Icarus falls into the sea, and the peasants nearby don’t notice — and everyone else professes their contentment, or their withdrawal in the context of the rest of the world. Des Moines, I’ve been told, is too much; my small town, my dad was told by his dentist (who’s from more of an Iowan village), is likewise excessive. My small town has a Wal-Mart and a Chinese buffet that moonlights as a wonderful Vietnamese restaurant. Des Moines is a deserted stretch of highway that apparently offers great opportunities for young professionals. My friends there all live in a nice, leafy, very livable neighborhood called Sherman Hill. Hearing about the neighborhood’s history, I felt like an English major who’s just encountered theory and realized we’re all really just telling the same story, over and again, about the terror of our families. It’s a historic district with ‘20s-era mansions built for the rich. Highways came, and the rich fled; Sherman Hill became a low-income neighborhood; now it’s undergoing gentrification. American cities all keep to the same narrative, condensing the national imagination; they only differ in velocity and scale.

Des Moines’ downtown is being revitalized, and Sherman Hill is just a walk away. We walked, avoiding the highway, past abandoned lots and useless expanses of grass. Suddenly a condo or a new faux-brownstone would appear. Pedestrians had vanished; then when two finally strode by, they looked exaggeratedly hip, as if compensating for geography. My friend had a more realistic sense of fashion. His hat had a pin stuck on it: Bernie Sanders for President.