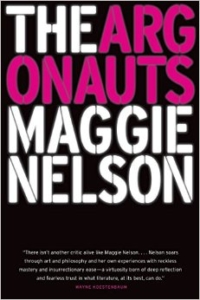 Maggie Nelson’s The Argonauts takes its title from the Argo, a ship in Greek myth. During the Argonauts’ voyage the ship was rebuilt until each part of it was new, yet still sailing under the same name. This idea of transformation is a recurring symbol throughout Nelson’s book, where it often refers to her tireless self-investigation into what identity terms mean. For example, regarding the word queer, and specifically how the critic Eve Kosofsky Sedgwick felt about it, Nelson writes “She wanted the term to be a perpetual excitement, a kind of placeholder — a nominative, like Argo, willing to designate molten or shifting parts, a means of asserting while also giving the slip. That is what reclaimed terms do — they retain, they insist on retaining a sense of the fugitive.”

To live under the sign of the Argo is the project of this more-than-memoir, in which Nelson details her relationship with the gender-fluid artist Harry Dodge. The years span how they met, married, and formed a family, with Harry’s son from a previous marriage and his and Nelson’s baby. The Argonauts is about queer family-making and love and art and theory. Reading this is like taking a crash course in gender studies and reading a how-to guide on writing sharp, perfect prose. I felt lucky to get to eavesdrop on the conversations between Nelson and Dodge as they navigate the boundaries of “normalcy” in our culture, what marriage means in terms of subverting, or more frighteningly, subscribing to, heteronormativity. Or as they’re arguing for whether the opposite of shame is honor, or honesty, and whether those words signify the same to both of them. Whether words at all are good enough.

At the start of their courtship, Nelson blurts out I love you during sex, and later sends Harry a passage of Roland Barthes in which “the subject who utters the phrase ‘I love you’ is like the Argonaut renewing his ship during its voyage without changing its name.” Afterward she says, addressing Harry, as she often does throughout the book, “I thought the passage was romantic. You read it as a possible retraction. In retrospect, I guess it was both.” Later Nelson builds on this idea of Argo, when she is pregnant and looking at sonograms, “we develop, even in utero, in response to a flow of projections and reflections ricocheting off us. Eventually, we call that snowball a self (Argo).”

The snowball self is a helpful way to think about Nelson’s prolific career. To date she has published nine books, which fit on a spectrum between poetry and scholarly nonfiction, and including all of the lyrical hybrids in between. This latest work is Nelson’s most personal yet, and it feels like culmination of the different hats she’s worn over the years; she describes herself, tongue in cheek, as in drag as a memoirist. She’s hit her stride with this hybrid work, returning to the prose blocks she used to great affect in the cult-classic Bluets (2009), and with the criticism honed in her nonfiction The Art of Cruelty (2011) and Women, the New York School and Other True Abstractions (2007). She’s perfected the series of tight prose blocks, which enact a narrative but also swerve into all kinds of intellectual digression. The personal and the academic are tangled within each section and around it.

The sections about motherhood exemplify this skill: descriptions of her baby Iggy are tender and intimate (“It isn’t like a love affair. It is a love affair”) but also call into question our cultural perception of maternity. It’s all too easy to trivialize writing about motherhood as being soft or sentimental — terms loaded with sexism. And when a mother does write about a topic considered taboo or transgressive, i.e. Nelson’s The Art of Cruelty, she must confront questions about how she handled working with such dark material. It’s almost unthinkable that a man would be asked that question in turn. Nelson is careful to examine any matrophobia in herself that she might have developed in reaction to these double standards. Nelson confesses she is sometimes embarrassed by heterosexuality; she is that wary of becoming normative.

Nelson pulls into the conversation her contemporaries and important predecessors, whom she affectionately refers to as “the many gendered mothers of my heart,” a term borrowed from the poet Dana Ward — which for Nelson includes intellectual heavyweights and artists, like Catherine Opie, Allen Ginsberg, Eileen Myles, Wayne Koestenbaum, and Eve Kosofsky Sedgwick. She returns to the late Sedgwick often; though they weren’t always in agreement, Nelson clearly respects her. Funny enough, the praise she gives Sedgwick could just as easily be applied to Nelson herself: “It’s easy to get juiced up about a concept like plurality or multiplicity and start complimenting everything as such. Sedgwick was impatient with that kind of sloppy praise. Instead, she spent a lot of time talking and writing about that which is more than one, and more than two, but less than infinity.”

Nelson eviscerates lazy thinking. I suspect I’d be completely intimidated were I ever to take a class with her — not that I wouldn’t jump at the chance. There’s a great moment in the book where she derides Slavoj Žižek for some transphobic comment he made, and describes the experience of reading certain philosophers as “more embarrassing than enraging to read Baudrillard, Žižek, Badiou, and other revered philosophers of the day pontificating on how we might save ourselves” from losing our humanity by being able to manipulate gender. Speaking of doomsday, she also calls to task the rich destroyers of our planet. Because, sincerely, fuck capitalism.

What makes this book such a pleasure to read is Nelson’s fierce intellect, which she thrillingly aims at the body. She has poet’s attention to detail with a critic’s readiness to joyfully dismantle everything we think we know. Example: the word fuck appears twice on the first page, first as in the literal, the second use figurative “Because nothing you can say can fuck up the space for God.” For those who think profanity indicates a limited vocabulary, I invite you to read anything by Maggie Nelson. Her intelligence is matched only by extreme honesty. She goes into the graphic particulars of what it’s like the live in the world, in a body: fucking, the alienness of pregnancy (“the static of facing not one, but also not two”), the cataclysmic event of childbirth (“falling forever, falling to pieces”), what sex feels like after birth.

In the events of this book, both Nelson and Dodge experience bodies in flux. As Nelson begins IVF and becomes pregnant, Dodge has top surgery and begins taking testosterone. “On the inside, we were two human animals undergoing transformations beside each other, bearing each other loose witness.” She observes wryly “In other words, we were aging.”

At a recent AWP panel, Nelson spoke with Eula Biss, Leslie Jamison, and Claudia Rankine — a group that was classified as creative nonfiction writers who focus, in some capacity, on the body — they all spoke about enjoying and deeply engaging in each other’s work, yet weren’t much moved by the category they found themselves in. How could one possibly avoid the body? they asked. It didn’t seem as much of a choice as an inevitability.

One of the pleasures of reading Maggie Nelson is (like the Argo) how she makes herself anew each time, new subject, new form. Yet there are echoes you can trace through her various works. In Bluets she describes the longing she feels when she looks at bower bird constructions: “When I see photos of these blue bowers, I feel so much desire that I wonder if I might have been born into the wrong species.” I thought of this moment, when in The Argonauts, she listens to a radio show on prehistoric human dwellings: “it’s the compartmentalization of space. The way we cook and shit and work in different areas. We’ve done this forever, apparently. This simple fact, gleaned from a radio program, suddenly put me at home in my species.”. At another moment she invokes color to draw an analogy between its diffuse nature and gender: whether one is something, or one has something.

A friend says he thinks of gender as a color. Gender does share with color certain ontological indeterminacy: it isn’t quite right to say that an object is a color, nor that the object has a color. Context also changes it: all cats are gray, etc. Nor is color voluntary, precisely. But none of these formulations means that the object in question is colorless.

There is so much in this book, it’s impossible to justice to it in one review. Other eddies the book contains: belief in God, as in planting bonsai trees slightly off center, to leave a space for God; how Anne Carson enacts this in writing. Ludwig Wittgenstein’s concept that the inexpressible may be contained in words. What it means to be a “sodomitical mother” (critic Susan Fraiman’s phrase), as well as a “good enough mother,” a concept popularized by child psychologist, D. W. Winnicott. Of Winnicott’s understated observations, Nelson describes him as “a writer for whom ordinary words are good enough.” There is something enormously comforting about this faith in language. Words might not always be good enough, but they’re the best we have, and Maggie Nelson is one of the best writers alive to use them.