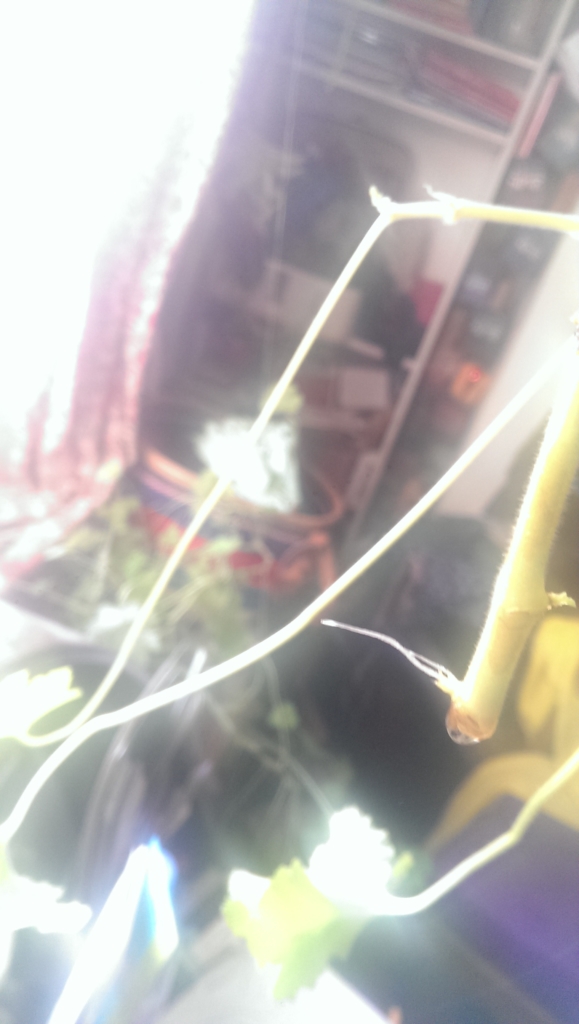 Geranium is a category error misapplied colloquially to the genus Pelargonium. Linnaeus, in his original taxonomy made no distinction between these two genera of the family Geraniaceae. I am, however, able to distinguish this particular plant — in its black plastic pot on a china plate decorated with small blue tulips and attended by a flint from the sea with a hole through the middle — from others within the genus. It’s a zonal scented Pelargonium, which I refer to as a scented geranium and, which by its plastic label purports to be of the species P. odoratissimum, trade name, Grandeur.

To write of objects in the specific is to struggle with the categorical nature of language. It is easier to describe generically the class of such objects than it is this object. I am writing here about this geranium.

This one has been here for perhaps six months, next to my desk, under the window and above the radiator. Prepositions are to objects as verbs are to subjects, and plants, perhaps more often than other life forms, keep their subject-natures to themselves. Pheromones and phototropism and the ability to asexually reproduce and many other communications and sensitivities are obscured from humanoid perception by object-drag and apparent stillness. 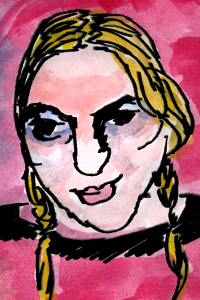 I like to imagine that the heat of the radiator goes some way to creating conditions similar to those of the deserts of southern Africa in which the green patterns manifest before me purportedly first emerged, if by emerged one understands that as being the place in time beyond which their story is not easily told. This geranium grew ferociously last summer gone. That was after I consulted the book E gave me last year on my birthday, from the 1950s or something, in which I learnt that geraniums despise the heavily calcified London tap water, and I started giving it rainwater collected in an old bucket outside or the remains of the small bottles of mineral water that capitalism demands I inevitably acquire and which I almost never finish drinking.

As the days got shorter this geranium got longer, all stalk and less leaf, reaching longingly toward the winter daylight that never reaches the intensity that the geranium’s indescribable heart desires. It is, as is sometimes said of plants, “leggier” than it was. I tied it for a while, with thin yellow cotton thread, to the lampshade, attempting to support the plant’s weight. I hoped it would climb and take over all of the space in my room. I had remembered a conservatory where others of its kind grew, taller than me and eventually, left to their own devices for years; up and out and under, through cracks in window frames and doors and through ceilings and partition walls. We found them upstairs, tendrils coming through where the wall met the floor of the room above, in the centre of which, a dead mouse lay.

This geranium is not so well established though, still in the pot in which it was sold, no doubt horrendously depleted by six months of growth without fresh soil. It is not so robust or agile but it is still alive. I am not an expert gardener; I have killed a lot of geraniums. My mother grew them at home; some were cloned cuttings from the same plants that parented those conservatory colossi. She gave me one but my cuttings failed and I could not continue the line. While this one sill continues to grow, I have tried to care for it, tying it up so it can catch the light, pinching the shoot tips to encourage it to grow out from the base and stronger. The tips taste like lemons and wood smoke and are tender like a broken heart and covered in tiny hairs the way nettles are. Where I touch, its scent rises, like the smell of roses but frayed and torn at the edges and a dark earthy spice beneath. The smell stays for a while on warm fingers. It creates in me this sense-impression of — what? — specifically the feeling of crying when you really need to cry, of finally having found that safe warm place where you can, of that shake in your chest of letting go to relief, of feelings under no obligations to language. Like Proust’s linden-blossom tea but way more abject and messy in its affect and yet unlike the time-vertigo of nostalgia it’s comforting; a reminder that inconsolability can become it’s own consolation.

Why should it do this? What does this plant, this pattern-in-the-world living here with me know of the others of its kind that I’ve cherished and killed and cried over? This thing, weaned on sub-atomic sparks in shit and earth and light and water, has taken me in its alien embrace and soothed my hurts and done so in my own language. Is it Pavlovian? Just chains of association, feelings and smells linking back? Constructed narrative memory? Isn’t all language, all classification, only holes tied together with string? Perhaps this geranium is not distinct at all from those others I have known and their cumulated effect is not accident but emergent narrative.

I took a cutting after I wrote a first draft of this. I tore out of the soil and placed in an old bottle of Hayat mineral water a long stem with three leaves on long thin stalks coming off it. I put it in the cold February sunshine on top of my desk and I waited.

In the water now, white and bright and growing perpendicularly out from the torn off green end that I placed there, are three roots. This geranium, divided from itself, continues, becomes these. There are fresh shoots growing on both plants since I last tried to describe them. I pinch one off and taste it. Green cells burst against my tongue.